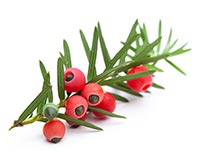 Yew leaves, berries and seeds are all highly poisonous and deadly. If any are ingested, they should be promptly removed by emesis after which milk and bland drinks may be administered. The chemical paclitaxel, found in the bark of the Pacific yew (T. brevifolia) and the Chinese yew (T. chinensis), is extracted to effectively fight breast and late stage ovarian cancers. As an incense, yew has long been used in ceremonies to protect and contact ancestors and the dead and to assist astral travel between the spirit worlds. As a homeopathic remedy, yew is used to treat neuralgia, rheumatism, and heart and kidney ailments.

Yew trees are lovely dense evergreens that can grow to be 40-50 feet high. Their trunks are red-brown with peeling bark, topped with a rounded or wide-spreading head of branches. It’s leaves are flat needles that  spiral around the tree’s twigs and are dark, glossy, almost black-green above and pale-green or grey beneath. They are half inch to an inch and half long and very thin. Yew flowers are unisexual. The “berry” (called an aril) is a fleshy red capsule at one end and encloses a hard, dark-green extremely poisonous seed.

Yews (Taxus baccata) are native to Europe, North Africa and Western Asia and are now grown in America as ornamental trees. They grow well in sun or shade. The Pacific Yew (T. brevifolia) is found in the Northwestern coastal forests of North America.

Caution: Leaves, Seeds and Fruit are ALL poisonous.

History/Folklore: Yew trees are legendary in Great Britain. Before Christianity, the trees were sacred to the Druids who built their temples near these trees. The association in Europe of these trees with places of worship continues to this day.

Yews are also associated with death. In Ancient Rome, black bulls were sacrificed to Hectate wearing wreaths of yew tied around their necks. The Celts also used funeral wreaths made of yew and certain sects of Christianity planted yews in graveyards to remind visitors of eternal life and to keep the dead from wandering away from their graves before Judgement Day. As the plant also kills grazing animals, some say it may have been a way for keeping herding animals out of sacred sites. Burning yew as an incense remains a traditional method for raising the dead and leaving a branch of yew on a gravesite is used as a reminder that death is a doorway.

Early Norse Pagans believed that because yew trees were both a Tree of Death and a Tree of Life, standing between this world and the next, that the tree could trap a person’s soul inside the tree. Ritually the yew is used to aid any work involving transformation, astral travel, necromancy, contacting ancestors and, due to the trees connection with the planet Mercury, the acquisition of knowledge and skill with words.

In the Middle Ages, yew was recommended as a means for killing wolves. Arrow tips were dipped in a poison made from the tree’s leaves and seeds that would kill animals instantly.

Wood from the trees was valued in archery for the making of long bows used in battles. The wood is considered to resist the action of water and is very hard, strong and resilient. Before the introduction of iron these properties made it highly valuable. It is a popular wood for making wands, runes and wood carvings.

In 1562, the Bavarian government sent a plea to the Holy Roman Empire to stop cutting down yews for the making of bows, siting damage to their forests. The great ancient trees protected other trees from severe winds.

Used in homoeopathy, a tincture of the young shoots and berries is used to treat headaches, neuralgia, cystitis, gout, rheumatism and ailments of the heart and kidneys.

It is documented that long ago a jelly or cough syrup was made from the soft inner gel of the berries to treat chronic bronchitis and the pain caused by nephritis. However, the highly toxic nature of the plant would suggest that this alleged remedy correctly fell out of use due to the poisonous nature of the plant and there being no clear documentation of dosages and preparations.

Two of the constituents responsible for the fruits and seeds being poisonous are the alkaloid taxine and the constituent milossin. There are many cases of cattle poisoning caused by horses or cows eating parts of yew trees. Nevertheless, deer, sheep and goats can all eat the foliage and suffer no ill effects.

The signs of toxicity include headaches, faltering pulse, coldness of the extremities, diarrhea and death. Thought to induce abortions, the plant has only caused the death of women hoping to prevent an unwanted pregnancy. The leaves have a very dangerous effect upon the circulation of the heart and can be fatal.

Yew trees are often grown in gardens as ornamental shrubs trimmed in decorative shapes and boxes.

The needles and twigs of the North American Yew (T. brevifolia) were used by Native Americans to brew teas for a wide range of ailments including cancer. Only highly trained traditional healers used the plant due to it’s highly toxic nature. Interestingly, a study in the 1960s by USDA botanists announced that a chemical, called paclitaxel, found in the trees bark, stopped cancerous tumors from developing. The drug was tested on women with both breast and ovarian cancer (even in advanced stages) with reports of remission. However, it took the bark from six 100 year-old trees to make enough medicine for just one patient. In order to save the plant from possible extinction and still provide cancer patients with an important medicine, a solution was found by combining the bark of the common European yew (Taxus baccata) with a fungus that grows under the Pacific Yew to recreate the cancer fighting chemical paclitaxel. This is a wonderful example of science confirming a plant’s healing powers, saving a species and making a medicine safe and affordable for those who need it. It can take more than 50 years for a yew tree to mature naturally for pharmaceutical use.

Yew leaves, seeds and fruits are all poisonous. Never ingest this herb in any form, it can easily be fatal.

Yews have been planted around graves and graveyards to protect the sacred sites and remind.

Yew is safely used in homeopathy to treat headaches, neuralgias, rheumatism and conditions of the heart and kidneys.