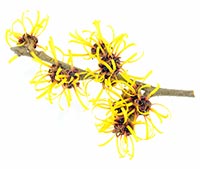 Witch hazel is native to North America and parts of Asia. However, it was the Native Americans who made the best use of the plant’s medicinal qualities and not the Chinese, where it remains mostly enjoyed as a garden ornamental and not as a medicine. Witch hazel is famous for its ability to heal a wide variety of skin ailments, but it can be used internally as well. It is gentle enough to be used alone or in combination with other herbs. Extracts of witch hazel with high herbal content and less alcohol will be the most soothing to use. Witch hazel is used to treat diaper rash, psoriasis, varicose veins, postpartum bleeding and diarrhea.

Witch hazel is a shrub or tree that can grow to be 20 feet tall and is easily recognizable by its brilliant orange or yellow blossoms that resemble exploding fireworks. The seed capsules erupt in fall and can fling seeds up to 30 feet away (hence the name “Snapping Hazelnut”). The bark is smooth and grey, and it’s alternate and oval leaves are 3-5 inches long, about 3 inches wide, with raised spots underneath and having stellate hairs. The yellow flowers appear very late in September or October after the leaves have been shed, in clusters from the joints, followed by black nuts, containing white seeds that are oily.

Witch hazel is native to North America and parts of Asia. It flourishes best in country fields and close to water sources and likes soil rich in acid content.

Caution: Considered safe topically. Internally, use with caution as the high tannin content can cause upset stomach and can be harmful if excessive dosing is applied, perhaps even becoming carcinogenic.

History/Folklore: The properties of the leaves and bark are similar. They are both astringing, tonic, sedating and useful to stop both internal and external bleeding.

Witch hazel extract is mainly used to treat hemorrhoids, skin irritations such as psoriasis and eczema, minor bleeding and as an aftershave to prevent facial sweating. It is popular for treating insect bites and poison ivy. Used externally it can be applied up to 6x a day. It is a clear, virtually odorless liquid that can be applied with cotton balls, soft clothes or added to other ingredients to make ointments and creams. It is often used to treat postpartum healing and diaper rash.

Native American were the first to use witch hazel, as the plant seems to have not been used medicinally in China, even though they have a native variety available. The Native Americans used the extract to treat a wide variety of medical disorders including swellings, inflammations and tumors. Early settlers learned the techniques and applications from the Mohegan tribe and the settlers quickly established the plant’s place in the pharmacopoeia of herbs used for healing. The Mohegans also taught the settlers how to use the saplings for dowsing for water.

The name “witch hazel” is believed to have derived from a combination of the words “wicke” the Old English term for “lively;” and “wych” the Anglo-Saxon term for “bend.” The word “Wicca” and the word “witch” are also thought to be derived from these same names.The botanical name, “Hamamelis” is derived from the Greek word meaning to “resemble an apple-tree.”

Extracts are made by boiling the plants stems, twigs and leaves. It was discovered that using steam distillation increased the plant’s healing potentials. The product called witch hazel water (Hamamelis water is distilled witch hazel extract.) By 1846, commercial witch hazel products were being manufactured and sold to the public. Pond’s Cold Cream, a popular household remedy for burns and swellings, was based on wild-harvested witch hazel and the Dickinson family, whose brand remains available today, was also one of the early producers of witch hazel extracts.

Once the twigs and bark have been steamed, the remaining extract is mixed with alcohol and purified water and other skin-conditioning ingredients and sold in ointments and creams.

The compounds in witch hazel help skin cells draw more closely together, shrinking pores and constricting capillaries at the skin’s surface. It also inhibits production of IL-8, a blood-borne inflammatory that increases as we age.

Plants like witch hazel, that are high in polyphenols are used to create anti-aging nutritional supplements that slow down disease progression by protecting cells. Puffiness under the eyes can be treated by dapping the area with cotton balls dipped in a water-alcohol solution of witch hazel. In Germany, witch hazel is approved for use in treating varicose veins. They recommend applying an ointment at least 3x a day for 2-3 works to see notable results.

Witch hazel is recommended to women to reduce the swelling and wounds resulting from childbirth.

Witch hazel extract has been shown in recent studies to help treat acne.

Witch hazel extract has been shown to protect against skin cancer.