The Chinese use the cherry pits of Prunus japonica, which is in the same Rosaceae family as the Western Prunus serotina and P. avuim. Both the East and the West use the cherry tree’s pit but in different ways. The wild cherries and the bark are typically used in the West. In the East, the pits and fruit are commonly used.

Below is an overview of wild cherry, combining and interpreting the best of Western Science, Traditional Chinese Medicine (TCM), Shamanism, Folklore and more. Gain a balanced and thorough understanding of the healing properties of wild cherry.

Medicinal Uses: Lowers blood pressure, relaxes muscles, and sedates uterus. The bark also has just enough hydrogen cyanide to stop coughs with out being poisonous but use with caution in large doses or using seeds which are higher in concentration.

The Cherry Tree is in the Rosaceae family (Rose family).  It grows 15-30m tall with a trunk about 70-120cm in diameter. It flowers in racemes and has shiny leaves that are simple 6-14cm long with serrated margin. The flowers are small with five white petals and about 20 stamens with 40 fragrant flowers to each raceme. Fruit is a drupe, 1 cm in diameter, that grows green to red then ripe when black. A mature tree will have very broken dark grey to black bark, which is very thick and like burnt potato chips. Native to North America and Eastern Canada. Chinese trees grow in Inner Mongolia and other parts of China. 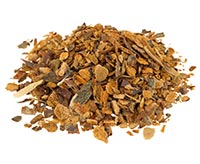 Caution: Not recommended for small children, during pregnancy, or if you have severe liver disease.

History/Folklore: From ancient times the Cherry Tree has been associated with virginity, with the red colored fruit and its enclosed seed as the symbol of the uterus. Buddhism teaches that Maya, the virgin mother of Buddha, was supported by the holy cherry tree during her pregnancy. The Danes felt it was important for a pregnant woman to eat cherries to insure another good crop.

Cherries were used medicinally during the Middle Ages with the bark placed at the door, to ward off plague. Culpeper said that the differing flavors of cherries, from sweet to more bitter, allowed them to be used in different ways. He also used the gum of the Cherry tree dissolved in wine to treat coughs, colds and sore throats. Wild Cherry stones (pits) have been found in Bronze Age settlements throughout Europe dating to 2000BC. By 800 BC the trees were being cultivated in Asia Minor and then in Greece. Compounds in cherry juice significantly reduce the chemicals that can cause joint inflammation. The Chinese grind Prunus japonica pits in mortar and pestle before using it. Good quality Cherry pits are light yellow and do not exude any oils. Some feel it is a good substitute for American ginseng.

Cherry wood is also used to smoke meat with and is cultivated in many places as an ornamental tree for the garden. It known for its strong red wood by woodworkers and carpenters.

Cherries are also one of the few foods that naturally contain melatonin, the hormone that helps you sleep. Sipping tart cherries before you go to bed can help you sleep. Sour cherries (tart cherries) also contain 19 times the amount of beta-carotene as is found in blueberries! So eat up and stay healthy!

Not For Live Stock

Like apricots, black cherries contain compounds that can be converted into cyanide. Therefore, it is removed from fields that will contain live stock as it can make them sick.