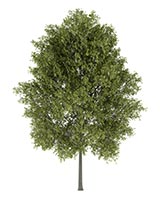 As a member of the willow family, white poplar also contains the constituent “salicin,” the compound used to make aspirin. White poplar is gentler than aspirin and useful for treating arthritic pain, chronic diarrhea, urinary complaints and menstrual cramping. The bark is known for its anti-inflammatory and pain relieving properties.

White poplar is a member of the same family of trees as willows, the Salicaceae family. It is a deciduous tree that can grow to be between 40-80 feet tall. The bark of the young tree is greenish-grey and smooth. It turns gray and creased as the tree matures. The leaves are palmately lobed with an oval or spherical shape that appear alternately. The top of the leaves are glossy and deep-green and the underside is whitish and hairy.

White poplar is native to Eurasia. It grows in woods, watersides, mountain areas and pastures. The Chinese species is mostly cultivated in North China.

History/Folklore: In Roman mythology, it is believed that the white poplar was dedicated to Hercules since he had obliterated an Italian shepherd who lived in a cave and dined on human flesh. The cave was in a hill covered with white poplar trees. Hercules overcame him and wore a crown of white poplars as a sign of his victory. So in Rome, when anyone significantly defeated their enemies they wore a garland of white poplar branches in honor of Hercules and their victory.

The 17th century English apothecary, Culpeper said, “The juice of the leaves dropped warm into the ears, eases the pain in them. The young clammy buds or eyes, before they break out into leaves, bruised, and a little honey put to them, is a good medicine for a dull sight… the ointment made of this poplar, is singularly good for all ear infections and inflammation in any part of the body, and tempers the heat of wounds. It is much used to dry up the milk of women’s breast when they have weaned their children.”

The bark is known for its pain-relieving and anti-inflammatory properties used to treat arthritic aches and pains. It is also used to reduce fevers, especially when associated with arthritis. The bark has tonic and stimulating properties and can be used while treating conditions that are debilitating, such as anorexia.

White poplar is gentle on the kidneys and can help treat scanty urination with low back pain.

The species P. nigra (Black Poplar) and P. tremuloides (Quaking Aspen) have similar properties but are different species. The Ojibwa people of North America used an oily compound made from bear fat and quaking aspen to treat earaches. Other North American Natives used the bark as a wash for sore eyes.

In China, poplar trees are considered something of a nuisance in the spring due to the large quantities of white fluffy balls called catkins that the trees release. Millions of poplars were planted in Chairman Mao’s day as a quick cheap way to bring greenery to the landscapes across China that had been devastated by famine and battles. Now they grow everywhere and in spring the catkins clog car radiators, irritate eyes and have been known to disrupt traffic and cause fires. They can become a bit like a snow storm, lowering visibility and filling the eyes and mouths of pedestrians.

A yellow dye is obtained from the bark. The wood is very resistant to abrasion and is soft and elastic. It is used for making matches and packing materials.

An extract of the shoots can be used as a rooting hormone for all types of cuttings. White poplars are fairly wind resistant tree making it a good tree for growing for “shelterbelts.” The trees grow very quickly.

During times of famine, the leaves can be eaten or the bark ground into a powder to use as a flour for making bread.

White poplar contains the same basic compound that makes aspirin, salicin. White poplar does not tend to irritate the stomach the way typical aspirin can.

The buds of the white poplar, are especially useful for external treatment of diarrhea, dysentery, burns and arthritic pain.