Widely used as a leafy green in salads and sandwiches, watercress’s high nutritional value makes it a true “food as medicine” plant. It has superior cleansing and nourishing functions and it is a prime anabolic blood builder, restoring the blood both structurally and functionally.

Watch a short video, from Ann Christensen, Founder and Creator of White Rabbit Institute of Healing™ – Many People Don’t Know This About Watercress…

Below is an overview of watercress, combining the best of Western Science, Oriental Medicine, Traditional Chinese Medicine (TCM), Shamanism, Folklore, and a wide range of healing modalities. Gain a balanced and thorough understanding of the healing properties of watercress.

How to take FULL advantage of Watercress's healing powers! 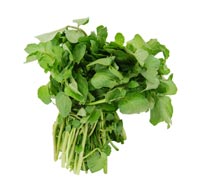 Watercress is a member of the family Brassicaceae, along with mustard, radish and wasabi. Hollow stems are floating and the leaves are pinnately compound. Small white and green flowers are produced in clusters. The poisonous marshwort Fool’s Cress is often mistaken for watercress, and the two plants can be found growing together. Marshwart may be distinguished by its hemlock-like white flowers, or its finely toothed and slightly pointed leaves that are much longer and paler than those of watercress.

Native to Europe and Asia. It is semi-aquatic, thriving in water that is slightly alkaline. Frequently produced around the headwaters of chalk streams.

History/Folklore: One of the oldest known leafy vegetables consumed by humans. The Romans used it as a staple in the diet of soldiers to help build strength and stamina. Watercress is eaten fresh as it is unsuitable in dry form. Therefore, it is rarely found in capsules or extract forms, fresh or powdered extract forms remain the preferred preparation as they contain the highest levels of active nutrient and antioxidants.

Used since the time of Hippocrates as a stimulant and expectorant to treat coughs and bronchitis. It is said watercress was naturalized by Nicholas Messier in Germany in the 16th century. In the nineteenth century it was brought to Canada and the United States where the climate was right and there were plenty of waterways for the plant to spread.

The high Vitamin C levels help the body absorb iron. Watercress is also high in vitamin K, A, and E. It also contains a host of key minerals used by the body to function and stay healthy. For this reason, it is considered a superfood. It is considered excellent for reducing the risk of chronic diseases such as cancer, autoimmune disorders, diabetes, arthritis, and heart disease.

Studies have found that the compounds DIM (diindolylmethane) and sulforaphane help to prevent cancer and slow its progression. The compounds zeaxanthin and lutein, also found in watercress, belong to the carotenoid family and have been proven to help support eye health. These compounds protect the eye from blue light damage, cataracts, and macular degeneration.

The plant’s active principles are said to be at their best when the plant is in flower. The best way to prepare watercress is to juice it or eat it fresh in salads.

It is excellent at cleansing and nourishing all the body’s fluids as well as the endocrine system and it addresses both pituitary and thyroid deficiencies. It is a remedy for chronic and degenerative diseases as well as a dietary maintenance supplement.

Crushed watercress leaves can be applied as a poultice to treat gout and rheumatism.

The Chinese consider watercress a food for nourishing the lungs. It is popularly used to support skin health, support thyroid deficiency and help counter chronic physical and emotional fatigue.

Due to watercress’s high level of Vitamin C, it was historically recommended as a remedy for scurvy.

It is one of the natural food diuretics, similar to parsley and asparagus.

How to use Watercress to take FULL advantage of it's healing powers!