The walnut tree’s history and use as a medicine, food and protector of the spirit dates back through Antiquity with almost all cultures. People have used its wood to build with, and its nuts, shell hull (husk), leaves, bark and even the spirit of the tree itself to ward off evil, illness, and hunger.

Below is an overview of walnut, combining and interpreting the best of Western Science, Oriental Medicine, Traditional Chinese Medicine (TCM), Shamanism, Folklore, and a wide range of healing modalities. Gain a balanced and thorough understanding of the healing properties of walnut.

How to use Walnut and take FULL advantage of it's healing powers! 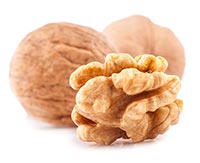 Key Actions: Tonifies the Kidneys, Moistens Intestines and Unblocks the Bowels, Astringes Leakages and Secretions, Warms and Invigorates the Spleen/Stomach and Intestine, Warms the Lungs

The trees have a very deep taproot. Monoecious male flowers are slender catkins, while female flowers occur in short terminal spikes on current years shoots. Walnut trees can grow to be 40 to 60 feet tall with a large spread top and thick massive stems. Walnut leaves are pinnate. The trees can live as long as 150 years.

China is one of the biggest walnut producers. The U.S. Sacramento and San Joaquin Valleys in California produce 99% of the country’s English walnuts. Originating in Persia, English walnuts were then brought to Europe by the Romans. English walnuts grow from Greece, Persia, to all along the Hindu-Kush to the Himalayas. Black walnuts are native to North America and can grow to be 100 feet tall.

Flavors/Temps: Leaf and Nut are Bitter and Pungent; The Nut is also Sweet.

History/Folklore: Sleeping under a walnut tree is said to cause dreams about future events. Some people say that the branches protect against lightning. Romans called them “the glans of Jupiter” (glans referring to the tip of the penis or the erectile tissue of the clitoris). In The Golden Age of Rome, it was said that “men lived upon acorns while the gods lived upon walnuts.” Women carried the nut to increase their fertility. Carrying the hard shell and wood is considered to give the holder power, protection, and inner certainty, allowing that person to move forward with courage when faced with uncertainties.

Nicholas Culpepper, the 17th century English herbalist, said walnuts that had grown older and more oily, could be used to heal “wounds of the sinews, gangrenes, and carbuncles…” and a “piece of green husk put into a hollow tooth, eases the pain.”

In modern times, it is the walnuts, leaves and hulls (aka husks) that are most commonly used. The husk is the green fleshy covering over the walnut shell. The walnut is actually the seed found inside the walnut shell. Medicinally, the husks are used when they have turned from green to black and are beginning to break down. Touching the blackened husks can turn your hands black, (they have been used to make dye) so be sure to wear gloves while harvesting! Walnut leaves can be harvested throughout the seasons.

In traditional Chinese medicine, black walnuts are known for building strength and the leaves are used to check vaginal discharge, kill parasites, and heal skin conditions. Walnuts are said to help the Kidneys Grasp Qi for treating Deficient Lungs causing chronic coughs and wheezing, constipation in the elderly, or for those constipated due to injured fluids following febrile illnesses.

Walnuts were used as toys in China’s imperial courts as early as 220 AD, becoming particularly popular in both the Ming (1386-1644) and the Qing Dynasties (1644-1912). They have remained a status symbol exchanged among the elite ever since. A pair of good collectible walnuts was a symbol of taste and social rank. China is the world’s largest producer of walnuts.

Walnut leaves have astringent, alterative, laxative, and detergent properties. They are commonly used in the treatment of skin disorders, especially herpes, eczema, acne, psoriasis, and fungal infections such as athlete’s foot or ringworm. Up to 10% of walnut leaf compounds contain astringent properties. Tannins account for most of the healing qualities of the leaves, they tighten and constrict tissues helping to protect the skin and reduce inflammation and itching. In Italy, walnut leaves are frequently used for repelling insects and treating parasitic skin infections.

Walnuts are edible and can be ground into flour for making breads, cakes, and cookies. The powdered nuts can also be added to smoothie drinks. The nuts are also mucilaginous. Unripe nuts have worm destroying properties. Walnuts can also be pickled.

Black walnut hulls contain iodine that is used for its antiseptic properties. Iodine produces thyroid hormones that if deficient can cause goiter, chronic fatigue, depression, and possible mental impairment. Iodine affixes itself to harmful bacteria in the body reducing the bacteria’s life span. Walnut husks are generally safe if used for up to 2 weeks at a time and then rested. It is not recommended they be used for long term on-going purposes.

The hulls have been used to combat sexually transmitted infections and malaria.

There is a story of an army doctor healing jungle rot in just 4 days using tincture of black walnut hulls.

The arginine, found in walnuts, helps blood vessels to relax and the ellagic acid compound in walnuts is known for its anticancer properties.

Powdered dried bark can be made into a strong infusion that is a purgative.

Walnut oil is excellent for making salad dressing and can be used for cooking, though is not recommended for cooking at high temperatures. Walnut oil has been shown to lower cholesterol and triglyceride levels up to 33% in a 45-day study.

The compound juglone, found in black walnut leaves and trees can prevent the growth of other plants around the tree’s trunk. The trees secrete the juglone toxin, which can extend for a 60 foot radius around the tree base and prevent some grasses and plants from growing.

In the Doctrine of Signatures, walnuts are famous for resembling the human head and brain. The outer hull is the skin, the walnut shell is the skull, and the inner nut is remarkably visually similar to the human brain. In fact, studies have confirmed walnuts, as a powerful brain food supporting cognitive function and brain health.

In Europe, the walnut tree is a symbol of intelligence, wisdom, knowledge, and inspiration. Native Americans view the walnut as a symbol of clarity and focus and associate them with gathering energy and beginning new projects.

Walnut trees have a long history of associating with witches. It is said witches gathered under the trees to celebrate and perform sacred rites or cast spells. Some of these ancient rituals are thought to have their roots in the cult of Isis.

Walnut wood is prized for its strength and beauty. It has been used to make the wheels of carriages, but does not make a useful beam for a house as it can become brittle. Oil made from the nuts can be used to polish the wood. The oil can also be burned as lamp oil.

Black walnut hulls were used to make ink, since it has very good archival properties. Leonardo and Rembrandt both used this ink.

NASA uses powdered shell as thermal insulation in rocket nose cones, since it can withstand extreme temperatures without carbonizing.

Walnuts are the oldest known food found on trees, dating back to 10,000 BC.

How to use Walnut to take FULL advantage of it's healing powers!