Vervain is a lesser-known herbal remedy despite its long history as a medicine and being connected to magic and religion. It is said to have been used to stem the flow of Christ’s blood from his crucifixion. Among other properties the herb is known for its sedating and calming properties. Often confused with lemon verbena (Alaysia citrodora) which is an entirely a different plant. Other medicinal varieties include blue vervain (Verbena hastata) and white vervain (Verbena urticifolia). Vervain is especially useful for treating acute and chronic inflammation of the sinuses and respiratory tracts.

Vervain (Verbena Officinalis) is a flowering plant in the Verbenacea family of plants. It is perennial plant with delicate oblong, jagged leaves and small, pale lica five-petaled flowers on shoots. It can bloom light blue to purple flowers, and some will bloom pink or white flowers. They have no fragrance. The plant can grow to be 12 to 36 inches tall. Blue Vervain (V. hastata) Has small deep blue or purplish-blue flowers in dense spikes.

Vervain is believed to be native to Europe and the Mediterranean region. It has now been naturalized to other parts of the world, including North America. It is also abundant in North Africa, China, and Japan. It likes most soils and can be found growing along roadsides in well-drained soils and in full sun. Blue Vervain (V. hastata) is native to North America and England. It likes fields, waste places, and dry hard soils, along roadsides. 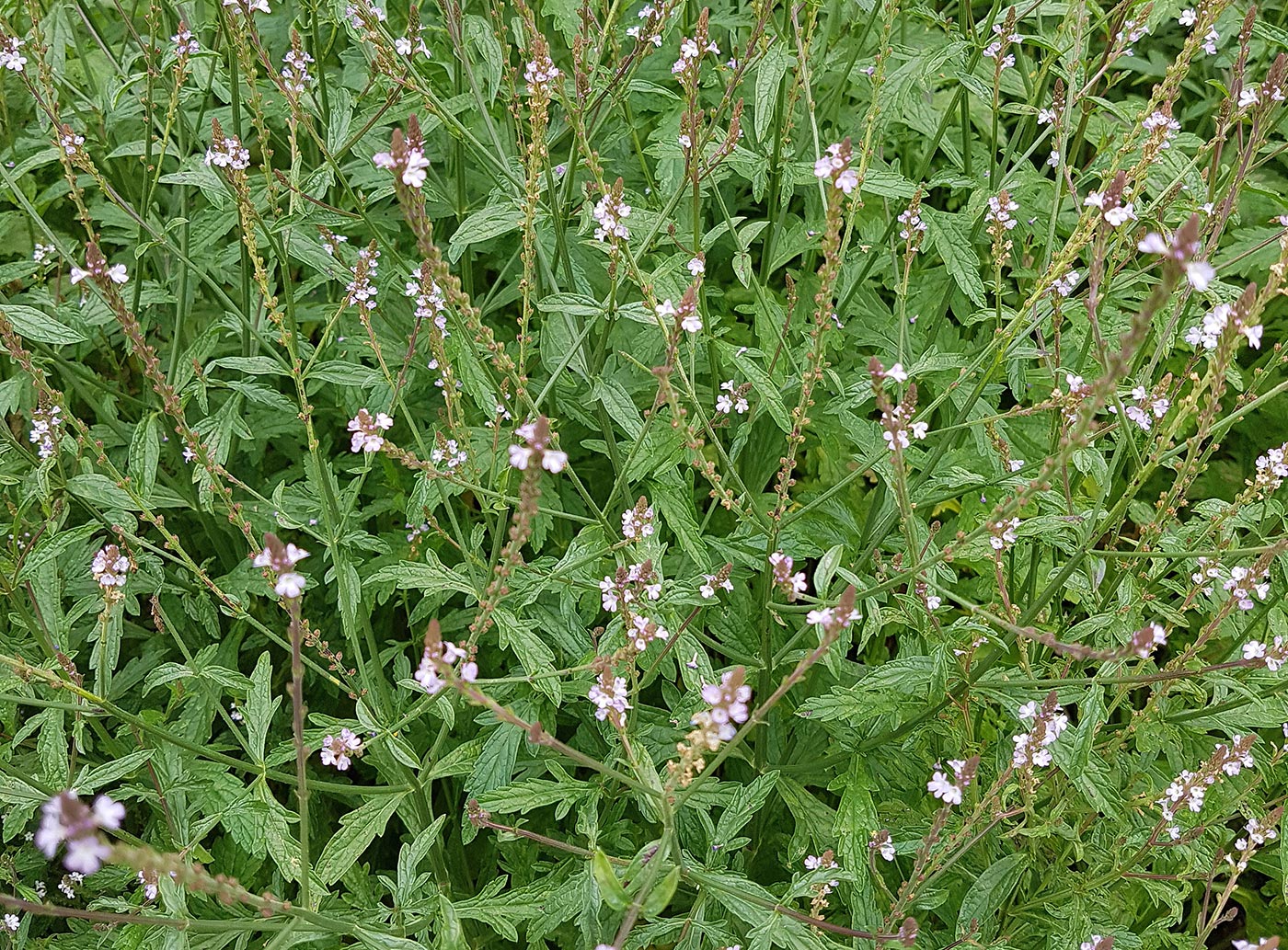 Vervain (Verbena Officinalis) is a flowering plant in the Verbenacea family of plants. It is perennial plant with delicate oblong, jagged leaves and small, pale lica five-petaled flowers on shoots. It can bloom light blue to purple flowers, and some will bloom pink or white flowers. They have no fragrance. The plant can grow to be 12 to 36 inches tall. Blue Vervain (V. hastata) Has small deep blue or purplish-blue flowers in dense spikes.

Vervain is believed to be native to Europe and the Mediterranean region. It has now been naturalized to other parts of the world, including North America. It is also abundant in North Africa, China, and Japan. It likes most soils and can be found growing along roadsides in well-drained soils and in full sun. Blue Vervain (V. hastata) is native to North America and England. It likes fields, waste places, and dry hard soils, along roadsides.

Caution: Vervain (Verbena Officinalis) is a uterine stimulant and not recommended for pregnancy, being used only immediately prior to or during the birthing process. Blue vervain (V. hastata) has been used to prevent miscarriage.

History/Folklore: The history of vervain as having medicinal, ceremonial, and superstitious purposes goes back thousands of years. It has been revered by Ancient cultures throughout Europe. Even its many common names convey the respect the plant was held in, including “the herb of love” and “herb of the cross.” It has been held sacred to the Egyptians, the Persians, the Greeks, the Romans, and the Druids. The plant’s astringent properties make it useful as a mouthwash for treating bleeding gums and mouth ulcers. Its calming properties help ease anxiety and stress. It is a gentle remedy with a wide variety of applications particularly useful when a mix of acute and chronic conditions presents.

In Ancient Egypt, vervain was said to have sprung up out of the ground when the goddess Isis shed tears to mourn the death of the god Osiris. The Romans, called the herb “herba sacra,” and the Ancient Greeks called it “heirobotane” or “holy plant.” The plant was used by these cultures to brush temple altars. Hippocrates, the Greek physician, recommended vervain for fever and plague.

Pliny the Elder, the Roman healer and herbalist, considered vervain as a sacred plant with numerous medicinal applications as well as recommending it for ritual sweeping and smudging of homes and as an ingredient in love potions.

Among other applications, the early Celts used vervain as a mouthwash to heal bleeding gums and help treat mouth ulcers. A recent study found that subjects with gingivitis, a form of gum disease, had significantly improved results treating the condition by gargling and using vervain as a mouthwash with no negative side effects. The Druids especially revered, blue vervain (V. hastata).

In Christian traditions, the herb is said to have healed the wounds of Christ inflicted by the crucifixion. One of its common names, “herb of the cross,” derives from this tradition. The plant was said to grow at Calgary, the location of the crucifixion.

St. Hildegard von Bingen (1098 – 1179) of Germany, regarded the herb as useful for treating swelling and inflammation of the throat and gums, healing ulcers, and treating jaundice.

Vervain tea has been used as a wash and compress to help heal wounds. Vervain was also often used to treat cuts and puncture wounds.

In the Middle Ages, vervain was often used in magicians’ and witches’ potions to attract protection and as an aphrodisiac, hence its common name, “herb of love.” It was also considered a cure-all for treating the digestive system and ailments of the abdominal region, as well as the lungs.

It is believed that the plants German name for vervain, eisenkraut, derives from the reference to iron referring to the plant’s use in the smelting process as a means to harden and improve longevity of steel.

Culpeper, the 17th century English herbalist, said vervain was, “An herb of Venus, and excellent for the womb to strengthen and remedy all the cold griefs of it, as plantain does the hot…”

The Chinese have used vervain to treat malaria, coughs, inflammation, and blood flukes. Used externally, the plant can turn the skin a reddish pink that is said to be sign of its ability to help draw blood out towards the surface of the skin to ease joint pain and remove what is called Blood Stasis or Blood Stagnation. The root can be chewed as a blood purifier.

Although vervain has similar properties as the Chinese herb bupleurum (they both Purify Blood and help Raise Qi), however, vervain does not have the same Liver protective properties or ability to counter prolapse (Raise Qi) in the same way as bupleurum.

Vervain can be used as a douche to help relieve leucorrhea.

It can be confused with the Homeopathic lemon verbena (Alaysia citrodora).

The name vervain is said to derive form the Welsh ferfaen, from ferri (to drive away or ferry) and faen (the soft mutation of maen, stone) as the plant was popularly used to treat bladder infections and stones.

Vervain was known to be a powerful protection against vampires. If a vampire had physical contact with vervain in any form, it would burn them.

Tannins, Silica, Volatile oils, Glycosides (including Verbenalin (aka Cornin) and Verbanine), and Alkaloids.

The roots of vervain were used by the Aztecs as a diuretic.

Verain has a long history as a sacred and mystical plant. It is said to help open the third eye, enhance intuition, and bring blessings and joy into your life.