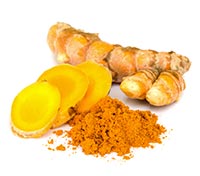 Turmeric stands alone for its exceptionally high margin of safety during its over 6,000 years use as a culinary spice in curry and medicinal herb. Turmeric is used most especially to treat heart disease, arthritis, Alzheimer’s, cancer, depression and chronic age-related diseases caused by inflammation. The Chinese use both White Javanese (C. zedoaria) and Yellow Indian turmeric (C. longa) medicinally. They also differentiate between Yellow Turmeric Root and the Rhizomes. Both have similar but distinct properties.

Want to Find Out More about Turmeric?

Take full advantage of the healing power of Turmeric (Yu Jin, Jiang Huang, E Zhu). What does Turmeric treat? Find out what you DON’T know about how and why Turmeric works. Find Out More…

Turmeric is a tropical perennial plant in the Zingiberaceae family. Ginger is also a member of this family. It can grow up to three feet tall and bears lance-shaped leaves on alternate sides of the stem. At the base of the stem, there is a knobby rhizome that resembles ginger. The root is a bright orange color that becomes very hard when dried. In China, the plant flowers in August.

Turmeric is native to India and is now cultivated around the world. Turmeric has also been found growing natively in Australia. It is widely grown in India, Nepal, South Africa and other parts of Southeast Asia.

History/Folklore: Turmeric was first used as a dye and then later for its medicinal properties. It does not in fact, make the best dye as it can fade easily.

Turmeric is a close relative to ginger which is also a good anti-inflammatory herb. The plant grows wild in the forests of South and Southeast Asia.

Turmeric is a popular ingredient in South Asian cooking. Typically, the powdered root is used as a culinary spice, but in some areas of India, where turmeric is grown, the fresh leaves are also used to wrap and cook foods. As a culinary herb, it is most often used in powder form. It is a key ingredient in commercially available curry powders. Its bright orange color is used as a dye in cheese and yogurt. It has been used in Indian cooking and medicine for many thousands of years.

Almost all Iranian khoresh dishes are started by using onions caramelized in oil with turmeric.

When not being used fresh, turmeric is boiled for about 20-30 minutes and then dried in hot ovens before being ground into powder.

Old folklore suggests turmeric was used as a method for birth control, while this has not been confirmed, using the herb while trying to become pregnant might be counterproductive!

In Medieval Europe, turmeric was known as Indian saffron because it was widely used as a less expensive alternative to the far more expensive saffron spice.

Only small amounts of turmeric are absorbed into the blood stream.

Although the constituent curcumin found in turmeric is available as a standardized extract, it is felt that the use of the whole herb is probably better for you than just the isolated constituent. The whole herb is known to stay in the digestive tract longer than curcumin, allowing it to release antioxidants and other beneficial substances.

Turmeric has been the focus of many thousands of studies and found to be effective in destroying cancer stem cells, protecting against radiation-induced damage, protect against heavy metal toxicity and preventing Alzheimer’s disease. A key feature of Alzheimers is a buildup of protein tangles, which studies are showing turmeric can help clear up, or slow the process of creating new tangles or plaques in the brain.

Turmeric is also a powerful anti-inflammatory.  Inflammation, especially chronic inflammation, is now known to play a major role in chronic diseases such as heart disease, cancer, Alzheimer’s and other various degenerative diseases.

Turmeric increases brain levels of brain-derived neurotrophic factor (BDNF), which are growth hormones that function in the brain. These help delay and reverse many brain diseases, helping to improve memory and improving mental clarity.

Turmeric prevents the release of histamine in the stomach, quelling nausea and counteracting food allergies.

Turmeric helps reverse many of the steps that can lead to heart disease. In particular, turmeric improves the function of the endothelium, or lining of the blood vessels, strengthening them, preventing hardening of the arteries and supporting vessel flexibility. The antioxidants in turmeric also fight atherosclerosis by deactivating platelet-activating factor (PAF). This protein leaks into the blood vessels, stimulating protein growth that can turn into a “net” on which cholesterol plaque can form.

Many studies are being conducted that indicate the effectiveness of turmeric in treating cancer. These studies reveal that turmeric reduces the growth of new blood vessels in tumors, the spread of cancer and contributes to the death of cancerous cells.

Turmeric has been used externally as a poultice to treat bruises (even infected wounds), acne, ringworm, sprains and swellings.

A volatile oil in turmeric helps relieve pains and is considered equal to similar amounts of steroids.

Turmeric has played an important role in Hindu spiritualism. The robes of Hindu monks were traditionally dyed yellow with turmeric, as its orange-yellow color was associated with the sun and in the chalkra system of body energy centers, it is identified with the solar plexus, or sacral chakra. In China, only the emperor was allowed to wear yellow.

The plant is used in other local Indian spiritual ceremonies, festivals, weddings, and as an image of the Tamil Goddess Kottravai. The powder is painted on the body, added to sacred foods, and the dried root is tied to a string creating a necklace that is used similarly to the way wedding rings are used in western cultures. A sacred tradition among the Bengali women uses turmeric to anoint newly married women, by having them bath in water infused with turmeric.

In China, Yu Jin (Curcuma longa) and E Zhu (Curcuma zedoaria) are both used medicinally. They are two different species of turmeric and are different plants. E Zhu (Curcuma zedoaria) is Javanese turmeric and the root is white. Yu Jin (Curcuma longa) is Indian turmeric and the root is bright yellow-orange. Confusingly, both can be referred to as “turmeric.” The Chinese also differentiate the rhizomes of yellow turmeric, called Jiang Huang (C. longa), from the roots of yellow turmeric called Yu Jin (C. longa).

Yu Jin is cool, while both E Zhu and Jiang Huang are warm. The meridian channels associated with E Zhu and Jiang Huang are the Spleen and the Liver. Yu Jin is associated with the Heart, Liver and Gallbladder. While all three are considered in Traditional Chinese Medicine to be beneficial treating pain in various parts of the body they are all considered especially effective in treating pain in the neck, shoulders and upper back. All are also good at stimulating the uterus and breaking up masses caused by blood stagnation.

Turmeric paper, also called curcuma paper, is paper used in a tincture of turmeric and allowed to dry. It is used in chemical analysis as an indicator for acidity and alkalinity.

The Spice of Yellow Curry

Turmeric is the spice that gives curry its yellow color.

Turmeric extract provides the highest levels of curcumin per dose.