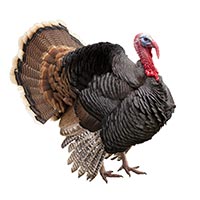 Turkey is low fat, high protein and highly nutritious. It will enhance your immunity, help you sleep, and build strength. Turkey is safe to eat for those suffering from irritable bowel syndrome. It is scared to the Mayans, Aztecs, and Toltecs.

Below is an overview of Turkey, combining and interpreting the best of Western Science, Traditional Chinese Medicine (TCM), Shamanism, Folklore and more. Gain a balanced and thorough understanding of the healing properties of Turkey.

Turkey is a large bird in the genus Meleagris.  Male birds have a distinctive fleshy watle or proturbance that hangs from The top of their beak (called a snood). They are among the largest birds in their ranges. The male is larger and more colorful than the female.  Domestic turkeys are so large they cannot fly and they are recognized for their distinctive “gobble, gobble, gobble” call.

Turkeys and wild turkeys are native to the Americas, mainly in Mexico and the United States.

Caution: Some people with gout cannot tolerate purine-rich foods such as turkey.

History/Folklore: The birds were brought to Europe by the Spanish over 400 years ago and came to England originally in 1550 and then via merchant ships from the Middle East where they were then domesticated. The merchants were called  “turkey merchants” as they were part of the Ottoman Empire, hence the name “turkey birds”, or more simply,“turkeys.”

A number of turkeys have been described from the fossil records.

In the United States the turkey is the symbol for the national holiday called Thanksgiving.  It is a celebration of the aid the Native American Indians provided the early pilgrims by introducing them to local foods that saved their lives when they first arrived. Turkey and pumpkins were among these foods and remain the main foods served every year on Thanksgiving holiday.

The Native American Creek tribes still practice a turkey dance as part of their annual fire festivals.  The Aztecs, Mayans and Toltecs viewed the turkey as sacred and called it the “jewel bird”.  They are a symbol of foretelling as they become agitated prior to poor weather conditions.

There are 153 calories in a 4-ounce serving of turkey. (You need to walk about 40 minutes to burn that many calories.)

34 Grams of Protein in 4-ounces

Turkey is known for being protein rich with about 34 grams of protein in a 4-ounce serving.

Turkey contains high levels of purines which can trigger attacks of gout.