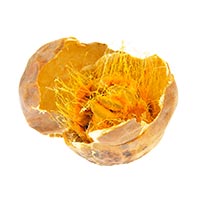 The part of the trichosanthes plant that was originally considered the most important was the fruit (Gau Lou), now the plant’s root Gau Lou Gen (more commonly called Tian Hua Fen) is more commonly used. Both the fruit and the powdered root have similar properties. The plant is famous for treating what is called “wasting and thirst,” an ancient reference in Oriental medicine for diseases such as diabetes and tuberculosis. It also is used to treat angina pectoris.

Pin Yin: Gua Lou (Trichosanthes Fruit, but this same name is also used to refer to the entire plant)

Trichosanthes belongs to the gourd family, Curcubitaceae. It is a perennial herbaceous vine. The stems have ridges and 2-3 tendrils. Its leaves are alternate. The plant bears both male and female flowers. Its fruit forms an oval to spherical shape similar to gourds. The fruit contains orange flesh. Its seeds are flat ovals. It flowers from June to August and bears fruit from September to October.

Trichosanthes is native to southern China and Vietnam. It likes to grow in damp valleys, the edges of forests and on hillsides. Most plants are now cultivated in China.

Caution: Considered safe, though high doses of the root during pregnancy would not be advisable. The typical small doses used in formulas and tablets ought not to be a problem.

History/Folklore: Trichosanthes fruit (Gau Lou) is classified as one of the 50 fundamental herbs in Oriental and Chinese medicine. Originally the fruit was used more often, now it is the root that has become more popular as a medicine. Both have similar properties and applications. The roots were not described until 800 years after the fruit

The seeds (Gua Lou Ren) and the pericarp of the fruit (Gua Lou Pi) can also be used but are not as popular as the root and the fruit.

The seeds are said to be best for used as a moistening agent for treating dry constipation and the fruits pericarp is said to be especially good for relieving stagnation of Qi in the chest. As the whole fruit has both these functions it is most often used.

All parts of the plant are typically used in doses of 9-20 grams in decoction. The seeds are sometimes used in slightly higher doses to help treat constipation.

Trichosanthes is traditionally most often used in formulas with other herbs to treat lung complaints that include symptoms of thick yellow sputum, phlegm and thirst. The phlegm is often thick and stuck, or not easy to expectorate.

Trichosanthes fruit (Gau Lou) is used today in tablet form and as an injectable for helping to treat angina pectoris.

Trichosanthes is also popularly used today to treat diabetes. As the herb is cooling, it helps to counter heat and nourish Yin (itself cooling and often deficient in diabetics) Studies have shown that 76% of diabetics that were given the herb (in doses of over 40 grams per day) experienced improved sugar tolerance and elevated serum insulin levels.

A common formula, that includes trichosanthes and is used for treating diabetic patients is Yu Quan Wan (Jade Sugar Pill). The extract pills are taken in large doses of 35-50 grams per day, and taken for at least one month. Research has shown that this formula helps to increase glycogen in liver cells, which in turn improves the uptake of sugar by cells in the body.

Trichosanthes is also known for its ability to treat breast abscesses and breast cancer and has been developed into a antiviral therapy used to treat HIV infections. In the 1990’s it was viewed by many as the most promising treatment for AIDS due to its ability to block viral reproduction. Extracts have also shown promise for damaging the protein coat on the RNA of the AIDS virus in vitro. Since then newer drugs have been developed that have taken its place for HIV and AIDS treatment.

The constituent trichosanthin, is a the toxic anti-HIV type 1 ribosome-inactivating lectin, that helped put the focus on trichosanthes as an early substance with the ability to help treat HIV.

The root (Tian Hua Fen) is white and tuberous and harvested in the autumn or winter.

In China, a protein fraction made from trichosanthes root has been developed as an injectable drug. This compound is typically destroyed during the boiling process of making tea or decoctions with the herb and it is degraded by stomach acids when taken orally. The protein was isolated and developed for inducing abortion as part of China’s “one child per family” birth control program. The research and development of this isolated compound from the herb grew out of ancient references to the plants ability to encourage menstrual flow and facilitate the expulsion of the placenta when used in certain ways. Today this injectable compound is also used to treat retained dead fetus, tumors in the placenta and ectopic pregnancies. Using the fruit itself will not cause abortion. Only the pharmaceutically isolated compound used in drug form can cause abortion, not the fresh herb or root.

The sterol compounds (AKA triterpene saponin alcohols) camposterol, sitosterol, and stigmasterol are thought to have phlegm thinning properties as well as anti-inflammatory properties. These exact same constituents are also found in ginseng.

The word “Gua” in Chinese translates as “gourd” and refers to the fruits similar shape as a gourd and the plants being an actual member of the gourd family, Curcubitaceae. The plant is often grown in Chinese courtyards for the sake of landscaping.

Besides being used as a medicine, trichosanthes is an edible herb.

Trichosanthes removes phlegm and moves Qi helping to relieve coughs and a choking sensation in the chest.

The root is especially used for successfully treating diabetes.