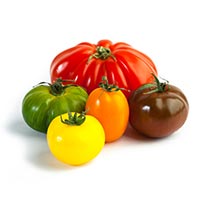 Tomatoes are the best dietary source for lycopenes. This constituent is famous for helping to prevent heart disease and prostate cancer in men. Tomatoes also provide 33% of your minimum daily requirement of Vitamin C. They are a symbol for the sun and good health.

Also Known As: Heirloom, Cherry, Roma and many other varietals

Tomatoes are the berry of a plant belonging to the nightshade family of plants known as Solanaceae (sometimes called “solanoid” family). Typically red, they also come in a variety of colors including orange, yellow, green and purple. There are hundreds of different tomato varieties that include a wide variety of shapes and sizes. Beefsteak and beef master tomatoes are among the largest-sized varieties.

Tomatoes originated in and are native to Central and South America. They are now grown all over the world.

History/Folklore: Originally from Central and South America, tomatoes are now grown all over the world. They are the second most produced and consumed vegetable in the United States. China is the largest producing tomato country in the world, followed by the U.S., Turkey, India and then Italy.

The Aztec culture from Mexico is credited with being the first culture to cultivate and name tomatoes. They called them, “tomati,” meaning, “the swelling fruit.” In the 1500’s, Spanish explorers brought tomato seeds back to Spain and introduced them to European populations.

A typical serving of tomato (½ cup or about 90g) contains 15 calories. Because they are sensitive to cold, they are best stored at room temperature and out of direct sunlight.

Tomatoes are rich in the constituent lycopene, which is an antioxidant famous for reducing heart disease, bone health and cancer. Lycopene is also a red pigment, giving tomatoes their typically bright red color. It is mostly located in tomato skin. However, your body is better able to absorb lycopene from some orange and red-orange tomatoes. The body’s absorption of lycopene is increased up to 4x by eating lycopene with fats. A deficiency in lycopenes can lead to an increased chance of osteoporosis, especially in women.

The constituent naringenin, also found in tomato skin, is known for decreasing inflammation and boosting immunity.

Current research confirms eating tomatoes improves heart health. The antioxidants in tomatoes helps protect the cardiovascular system, reducing the risk of lipid peroxidation in the bloodstream. This is the process in which the fats being carried in the blood or that are lining the membranes of cells in the blood stream become damaged by oxygen. Chronic peroxidation compromises the immune system and can lead to atheroscleorsis and other heart and circulatory problems. Tomatoes also help regulate fats in the blood, decreasing LDL cholesterol and triglyceride levels. Finally, the numerous phytonutrients in tomatoes help prevent platelet clotting in the blood, further improving blood circulation and flow.

Tomatoes have also been confirmed as able to help prevent prostate cancer in men. In China, one whole tomato is eaten daily to help treat kidney disease. In the ancient Chinese dietary text, called the Lu Chun Ben Cao, tomatoes are considered beneficial for the whole body, especially for cooling Liver Heat and removing toxins. Medicinally, the Chinese will eat tomatoes raw or decoct in water.

The French refer to the tomato as “pomme d’amour” or “love apple” and in Italy it is called the “pomodoro” or “golden apple.”

Tomatoes leaves and roots are poisonous.

Because of the tomato plant’s long strong vines, it is a symbol for strong romantic partnerships. It is also a symbol of the sun and health.

Fruit not a Vegetable

While typically referred to as a vegetable, tomatoes are in fact, a fruit.

Tomatoes are the major dietary source for the important antioxidant called lycopene.

New studies are showing that eating tomatoes can be linked to reducing the effects of neurological diseases such as Alzheimer’s.