Thyme is a food, incense, and medicine for the mind, body, and spirit that has an ancient medicinal and magical history. Fresh thyme has one of the highest antioxidant levels among herbs and is often used as an ornamental plant in gardens.

Below is an overview of thyme, combining the best of Western Science, Oriental Medicine, Traditional Chinese Medicine (TCM), Shamanism, Folklore, and a wide range of healing modalities. Gain a balanced and thorough understanding of the healing properties of thyme.

How to take FULL advantage of Thyme's healing powers... 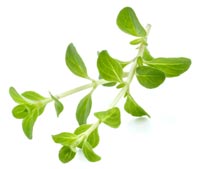 CHECK OUT my Online Course all about Thyme. Dive deep into the benefits and applications of Thyme from Eastern and Western perspectives and much, much more!

History/Folklore: Ancient Egyptians used thyme for embalming, as the herb was known to preserve meat. The Sumerians used it as an antiseptic in 3000 BC. The ancient Greeks used it in their baths and burnt it as incense in their temples, believing it to be a source of courage. They used thyme as a symbol of elegance.

The Romans used it to treat melancholy and to become courageous. It was carried into battle to promote bravery and strength. They also used it as a flavoring for alcoholic beverages and cheeses. Romans often ate a bit of thyme prior to eating a meal to prevent food poisoning or poisoning in general! It was said that even a bath full of thyme could help counter the effects of poison if it had been mistakenly ingested.

In Europe during the Middle Ages, the herb was placed beneath pillows to aid sleep and ward off nightmares. It was also worn on clothes to ward off the plague, as it was a major ingredient in virtually every remedy to prevent or cure the disease. During this time, it was a common symbol of chivalry. It was commonly given to soldiers before they went off to battle. It was often placed on graves to support the departed on their journey in the after life, a practice that dated back to the early Egyptians.

In 1725, a German apothecary discovered that the plant’s essential oil was effective against bacteria and fungi. In the 19th century, thyme was used to disinfect hospitals and promote recovery in patients. Before the advent of modern antibiotics, thyme was used to medicate bandages.

In modern times, thyme is recognized for its powerful antioxidant, antiseptic, antiviral, and antibacterial properties. It is excellent for supporting a strong immune system, fighting and preventing respiratory infections, and soothing irritated skin conditions from eczema, to acne, to helping heal sprains, cuts, and bruises.

The compound thymol, found in thyme, has powerful antiseptic properties that support many of the herbs’ historical applications from preventing illness to healing wounds.

Thymol, a main compound in thyme, is an antiseptic and is also the main active ingredient in commercial mouthwashes.

The Anther species of thyme, Thymus serpyllum (wild thyme or creeping thyme), is an important source of nectar for honey bees.

Thyme leaves are one of the richest sources of potassium, iron, calcium, manganese, magnesium, and selenium.

How to use Thyme (Bai Li Xiang) and take FULL advantage of it's healing powers!