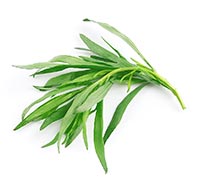 Tarragon, also known as estragon, is famous for its flavor and aromatic properties that make it a popular culinary herb. It can also be used as a tea to help treat insomnia. French tarragon is the variety favored for cooking. The plant’s aromatic qualities are similar to the scent of anise. Chewing the leaves helps relieve mouth or dental pain. The herbs antioxidant properties help neutralize cancer causing free radicals in the body. The World Health Organization recommends tarragon as a first step in treating basic malaria.

Tarragon is a species of perennial herb in the sunflower family, Asteraceae. Tarragon grows to two to four feet tall, with slender branched stems. The leaves are narrow, lanceolate, glossy green, with an entire margin. The flowers are produced in small capitulae which contain up to 40 yellow or greenish-yellow florets. The roots are long and fibrous, spreading like runners.

Caution: As a food and medicine, tarragon is considered safe. The constituent, estragole, found in tarragon can be toxic if isolated and used in high doses.

History/Folklore: There are three main types of tarragon that are generally referred to: French, Russian and Wild. The plant is closely related to Wormwood. Of the three main types of tarragon, French tarragon is considered best for cooking, Russian is considered better than wild, but not as strongly flavored as the French and wild tarragon, which is least preferred for cooking.

The plant’s botanical name, Artemisia dracunculus, means “little dragon” It was called this as it was believed long ago that the plant could cure the bite of a dragon or snakes.

Tarragon is considered one of the Four Fine Herbs of Classic French cuisine. The Four Fine Herbs include equal parts parsley, chervil, chives and tarragon. The French consider tarragon to be “The King of Herbs.” In cooking tarragon is especially favored for eggs, chicken, and fish dishes. It is a key flavoring agent for Bearnaise sauce. Fernand Point, the French chef known as the father of modern French cuisine is quoted as saying, “ A Bearnaise sauce is simply an egg yoke, a shallot, a little tarragon vinegar, and butter, but it takes years of practice for the result to be perfect.”

Dijon mustard is also flavored with tarragon. Fresh tarragon is far more intense in flavor and scent than dried tarragon. Too much heat can cause tarragon to turn bitter.

It is used to flavor vinegar, and a popular carbonated drink, called Tarhun, enjoyed in Armenia, Azerbaijan, Russia and Kazakhstan. In Iran, tarragon is used as a side dish, in stews and in Persian style pickles, especially pickled cucumbers. In Slovenia, a variation of the traditional nut roll sweet cake uses tarragon as a main ingredient. In these areas tarragon was also used to reduce inflammation and heal topical skin wounds. It was also used in Russia to reduce the convulsions caused by epilepsy, scurvy and night blindness.
Russian tarragon is a hardier plant than French tarragon, but it also has a milder flavor and is less aromatic.

Pharmaceutically it has very similar properties and constituents.

Tarragon was introduced to Italy in the 10th century during the Mongol invasions, who besides cooking with it, used it as a sleep aid and breath freshener. There are written records of tarragon being cultivated as far back as 500 B.C.

The Ancient Greeks chewed the leaves to help numb tooth pain. The high levels of eugenol in the plant is the constituent that contributes to this pain relieving effect. It the same compound found in clover contributing to clovers ability to also relieve pain.

In the Middle Ages in Europe the herb was used to treat fevers and upper respiratory infections.

Tarragon supports the stomach by preventing stomach ulcers by increasing the secretion of gastric juices. Its bitter quality also aids general digestion and helps to increase a weak appetite. It helps the breaking down and the uptake of nutrients from food. Russian tarragon has been shown to be especially effective at balancing insulin levels in the body, helping to calm the effects of diabetes. It can also aid in glucose metabolism and its uptake by cells. Russian tarragon also helps treat diabetic symptoms by boosting the transport of glucose in the bloodstream to cells, in particular to cells in the muscles. It increases creatine uptake in the muscles.

In Traditional Chinese Medicine, tarragon is used to protect and strengthen the liver. It is considered a diuretic and is used topically to reduce inflammation. The Chinese used tarragon to treat malaria, hepatitis, gastric ulcers, cancer, diarrhea, circulatory diseases, parasites, and microbial infections. Studies have shown the herb is effective for treating uncomplicated cases of malaria and eliminating the parasite Plasmodium falciparum. The World Health Organization recommends tarragon as a first step in treating basic malaria.

Native Americans used the herb to treat gynecological disorders including aiding difficult births. The leaves were chewed to calm heart palpitations and it was used in baths to soothe and bring strength to the body. Some tribes used its scent as a mosquito repellent and some used it to make salves to treat and heal wounds.

Essential oil made from tarragon is widely used to help move blood and eliminate uric acid, which helps prevent rheumatism and arthritis from developing. The essential oil also stimulates your brain, nervous system, digestive and endocrine systems, all of which support growth and strengthen your immune system.
The constituent, estragole (methyl chavicol) can be poisonous in high doses. The fresh leaves only contain a very small amount of estragole, hence its common use in food and cooking.

Adding essential oil made from tarragon to your bath will help relax and soothe your nerves.

Recent studies indicate that Russian tarragon, helps to increase muscle creatine absorption, decreasing the need for large amounts of carbohydrates to be consumed to achieve the same effect and helping to better control weight..

A hot compress made with tarragon essential oil can be placed on your belly to help kill intestinal worms.