Tansy has long been used as a medical herb despite its toxicity. Its leaves and flowers are toxic if consumed in large quantities, as they contain toxic compounds, including thujone, which can cause convulsions and liver and brain damage. The plant is no longer recommended for internal use. It has a long tradition as an effective treatment for intestinal worms, digestive issues, stimulating menstruation, and rheumatism. Do not confuse tansy with tansy ragwort (Senecio species) or other plants commonly called “tansy”, including Blue Tansy (Tanacetum annuum) which is used to make Blue Tansy Essential Oil.

Watch a short video, from Ann Christensen, Founder and Creator of White Rabbit Institute of Healing™ – What is Tansy Used for?

Below is an overview of tansy, combining the best of Western Science, Oriental Medicine, Traditional Chinese Medicine (TCM), Shamanism, Folklore, and a wide range of healing modalities. Gain a balanced and thorough understanding of the healing properties of tansy.

How to take FULL advantage of Tansy's healing powers... 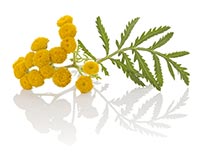 JOIN ME in an exploration of the healing herb, Tansy (Ai Ju). Explore the benefits and applications of tansy, from Eastern and Western perspectives, and so much more!

Medicinal Uses: Sprains, Epilepsy, Digestive Upsets due to Damp (such as bloating, gas, and nausea), rheumatism, gout, edema, externally as a douche for vaginal discharge.

Tansy is a perennial, herbaceous flowering plant in the Aster family. It has finely divided compound fern-like leaves and yellow, button-like flowers. Its erect stem is somewhat reddish and usually smooth. It can grow to be 20-60 inches tall, branching near the top. Its leaves are alternate, long, and pinnately lobed. The round, flat-topped, button-like flowers are produced in terminal clusters that bloom from mid-to-late summer. Their scent is similar to camphor and a hint of rosemary.

Tansy is native to the temperate zones of Europe (including Britain and Ireland) and Asia. It has been introduced to North America and other parts of the world.

Caution: Deaths have been reported after taking only 10 drops of tansy oil, teas, or powdered forms. Its leaves and flowers are toxic if consumed in large quantities, as they contain the toxic compound thujone, which can cause convulsions and liver and brain damage. Some individuals can suffer from contact dermatitis while harvesting the plant, so wear gloves! Not recommended for pregnant women as tansy can cause uterine contractions.

History/Folklore: The ancient Greeks are thought to have been the first to cultivate the plant as a medicine. By the 8th century AD, it was grown in the herb gardens of Charlemagne and Benedictine monks. It was used to treat intestinal worms, rheumatism, digestive problems, fevers, sores, and to bring out measles.

During the Middle Ages this already toxic plant was used in high doses to induce abortions (sometimes called “a stalled period”) as well as in smaller doses to promote pregnancy and prevent miscarriage. Due to the presence of thujone, a toxic compound, tansy is no longer recommended for internal use. Thujone can cause vomiting, severe diarrhea, kidney or liver damage, bleeding, abortions in pregnant women, and seizures. Amounts of thujone can vary wildly from plant to plant, making dosing difficult, as even at “normal” doses it can then become quite toxic as one plant may contain far more of the compound than another.

By the 15th century, tansy was served by Christians at the annual Lenten meal to commemorate the bitter herbs eaten by the Israelites. It was also noted to have the added benefit of treating the flatulence and possible intestinal worms often associated with days of eating fish as part of the Lenten practice. By the 16th century in Britain, it was considered a “necessary plant for a garden”. In19th century, in Irish folklore traditions, it was suggested that taking a bath of a solution of tansy and salts would help to cure joint pain.

The English herbalist, John Gerard (c. 1545 – 1612) noted tansy for its “pleasant taste” and recommended it for sweetmeat recipes that could help treat gout. In Yorkshire, tansy and caraway seeds were traditionally used in biscuits at funerals. Its flavor is said to be tangy and sharp, similar to cinnamon or nutmeg, and with a cool heat a bit like peppermint, but as it remains noted for causing toxic side effects it is no longer used as a culinary herb. Traditionally, some used it as a substitute for sage.

The 17th century English herbalist, Nicolas Culpepper said, “Of Tansy. The root eaten, is a singular remedy for gout: the rich may bestow the cost to preserve it.”

Tansy has been used externally to treat scabies, sprains, sores, itching bruises, vaginal discharge, sunburns, and as an effective insect repellent. However, some people may experience contact dermatitis from the plant, so use externally with caution.

Many of the traditional applications of tansy have been discredited by today’s science, even so, tansy remains a component of some medicines and is listed by the United States Pharmacopeia as a treatment for fevers, feverish colds, and jaundice.

Tansy is highly toxic to internal parasites and for centuries has been used to treat these kinds of conditions. It was recommended an infusion of tansy be given to children to kill worms and draw out measles. The plant is also a highly effective insecticide and insect repellent. As an insect repellent and worm warding plant, it was often packed into coffins, wrapped in funeral winding sheets, and wreaths made of the plant were also sometimes placed on the dead to help preserve them from decomposition from worms.

The first president of Harvard University was buried wearing a tansy wreath in a coffin stuffed with tansy. When his grave was moved in 1846 the tansy had retained its shape and fragrance helping to identify the president’s remains. The plant was used so much in New England funerals that it began to be associated with death and fell out of favor due to this morbid association with burials.

During the American colonial period, meat was rubbed or packed with tansy leaves to repel insects and delay spoilage.

The Latin name vulgare means “common”. The word “tansy” comes from the Greek word for “athanasia” which means, “immortality.” Tansy has very long-lasting flowers and it was also used for embalming and therefore thought to confer immortality.

Tansy can be used as a face wash and was reported to help lighten and purify the skin. However, it contains sesquiterpene lactones that can cause allergic contact dermatitis in some people.

In Traditional Chinese Medicine (TCM), common tansy (Tanacetum vulgare) is noted for its ability to Clear Dampness and Move Qi. Blue Tansy (Tanacetum annuum) is an entirely different plant, which does not contain the toxic thujone, and is considered to Build Qi, Clear Heat, Tonify the Lungs and Heart, and Lift the Spirit.

Blue Tansy, Tanacetum annuum, is often confused with common tansy (Tanacetum vulgare). They are not the same plant. The first is an essential oil with a completely different chemical profile and containing none of the compounds that are known to be toxic in common tansy.

The compounds axillarin and 5-dicaffeoylquinic acid, found in tansy have been shown in research conducted by Britain and Spain and published in 2011, to have antiviral properties that are effective against herpes simplex virus (HSV) and might be used for creating a medicine for treating or preventing HSV.

Tansy is commonly used as an effective insect repellent. In the 1940s distilled tansy oil was blended with fleabane, pennyroyal, and diluted alcohol as a well-known mosquito repellent. Research has confirmed tansy extract does repel mosquitos, though not as effectively as products containing DEET. A study from Sweden conducted in 2008, also showed tansy as able to repel ticks 64-72% for each oil constituent.

Tansy is often planted as a companion plant for biological pest control. Planted alongside potatoes to repel the Colorado potato beetle, a study found it reduced the beetle population by 60 to 100 percent. In England, it is placed on window sills to repel flies, and sprigs have been placed in bed linens to prevent bed bugs. It also makes a good ant repellent. It is often planted with cucumbers, squash, cabbage, roses, and various berries to help protect them from pests.

Tansy has been hung around the house as a protection against monsters and the dried herb has been burned as incense. The herb has a long tradition as being a popular “Strewing Herb” to help keep Middle Age castles and spaces clean. These are herbs that were strewn across floors for scent, and to deter flies, mice, ticks, ants, bedbugs, and lice, as well as to generally help keep an enclosed environment clean.

Tansy is especially toxic to dogs and can be unhealthy for goats and sheep as well.

A bitter tea made from tansy has traditionally been used to treat parasitic worms.

Tansy was frequently worn in shoes to help protect against malaria and other fevers. Given its insect repelling properties, it probably was effective in minimizing the exposure to mosquitos and insects that might be carrying the disease.

Dried tansy is used by some beekeepers as fuel for bee smokers.