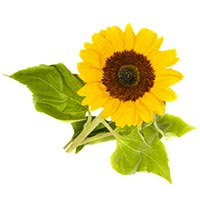 While the Chinese cultivate sunflowers for food, they do not typically use it medicinally, but it is used as a medicine and food in the West. The seeds are highly nutritious and sunflower oil is said to be the closest alternative to olive oil and can be used as an olive oil substitute.

Below is an overview of Sunflower, combining and interpreting the best of Western Science, Traditional Chinese Medicine (TCM), Shamanism, Folklore and more. Gain a balanced and thorough understanding of the healing properties of Sunflower.

Sunflowers are an annual plant, with about 50 species with hairy stems that grow between three and twelve feet high. They have broad, coarsely toothed, rough leaves and circular head flowers.  The flower-heads are composed of many small tubular flowers arranged compactly on a flattish disk.

Mainly native to Mexico, Peru, and the California Rocky Mountains.

History/Folklore: The name “Helianthus” derives form the word “helios,” meaning the sun and “anthos” meaning flower. It is believed that the size of the flower, its color, and the fact that the blossoms follow the path of the sun over the course of a day, always turning to receive the suns direct rays, led to the naming of this plant.

In Peru,  the flower is revered by the Aztecs. Priestesses were crowned with the flowers while carrying them in their hands during ceremonies in their temples of the sun. The temples held numerous representations of Sunflowers wrought in pure gold.

Sunflowers were introduced to Europe in the 16th century and have become a very common garden plant.

Every part of the sunflower is used for some purpose. The leaves form a cattle-food and are also liked by rabbits and horses, the stems contain fiber used to make paper, the flowers are used to make both a yellow and purple dye, and the seeds are rich in oil.

Sunflower oil is a crop for Russia, Spain, France, Germany, Italy, Egypt, India, Manchuria and Japan. The oil is mainly produced in Russia. Sunflower oil is used as a drying oil for mixing paint, in WWII it was used in the making of munitions, it is unrivaled as a lubricant, you can make soap with it and it is used in candle-making.

The seeds are used to feed chickens. Feeding fowls bruised sunflower seeds is known to increase their laying power. Roasted in the same way as coffee is, they make a warm drink, and crushed they are used to make nutritious breads.

Farmers say the best way to grow the plants is in rows running north and south, with seeds placed nine inches apart, in rows thirty inches apart. As the plant assimilates a large quantity of potash it must not be planted in the same soil the second year. Sunflowers are most common after fires.

When the stalks are dry they are as hard as wood and make excellent firewood, however, burning them in the field is a better reclaiming of the potash back into the soil where potatoes and other root vegetables can then be planted.

The Native American Shasta people burned the roots to purify the house after someone died as well as to counter stuck emotional problems and resolve any false ideas about actions needing to be taken in life.

The leaves are utilized in herb tobaccos.

It is said that the Chinese blend sunflower fiber into their silks.

Sunflower seed oil is said to be the oil that is most like olive oil, and can be used as an olive oil substitute.

The pith of sunflower stalks is now known to be the lightest substance known, with a specific gravity of only 0.028.

The seeds can be browned in the oven and then made into an infusion to help whooping cough.