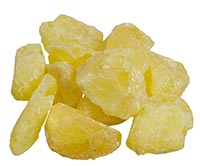 The body uses sulfur to maintain bone and joint health. Sulfur is a critical component of many amino acids, proteins, vitamins and hormones within the body. It aids healthy skin and digestion. It is known as an important external treatment for stubborn psoriasis.

Sulfur is a mineral. It is a chemical element with the symbol “S” and atomic number 16. After excavation the mineral is heated and melted in order to remove impurities. Sulfurs crystal structure is orthorhombic, forming a cone cylinder or needle cylinder. They are dense porous lumps, that are yellow, honey-yellow or brownish in color.

Sulfur is the fifth most common element mass on Earth. It is found near hot springs and volcanic regions in many parts of the world, especially along the Pacific Ring of Fire. Here is it mined in Indonesia, China, and Japan.

Caution: Sulfur itself is toxic. Recommended dosage for internal use is 1.5 – 3 grams in pills or powder form. Unprocessed sulfur can contain arsenic. MSM (methylsulfonymethane) is an organic sulfur compound that is present in many foods and is safe for consumption.

Sulfur has a pungent odor that smells like rotten eggs. It is soluble in carbon sulfide, turpentine and kerosene and insoluble in water or sulfuric acid.

Volcanic sulfur contains trace amounts of arsenic, selenium, zinc and thallium. Good quality sulfur is yellow, shiny, crisp and soft. MSM (methylsulfonymethane) is an organic sulfur compound that is present in many foods. It is considered a biologically active sulfur and is a critical nutrient for your health.

MSM (methylsulfonymethane) is believed to inhibit a protein complex that is involved with inflammatory responses in the body. It also reduces the production of cytokines (including interleukin 6) which are signally proteins linked to systemic inflammation. Systemic inflammation is a leading cause of heart problems, diabetes, arthritis, dementia, and premature signs of aging. MSM also increase levels of glutathione, a powerful antioxidant produced naturally in your body.

Traditionally it has been used to keep snakes away, help hair growth, kill bed bugs, chiggers, and dog mange.

Medicinally, sulfur has proven to be highly effective as a powder used to treat psoriasis. In Traditional Chinese Medicine, sulfur is considered as hot and psoriasis is considered to be an icy condition that the fire of sulfur helps neutralize and heal.

In Traditional Chinese Medicine, sulfur is recognized as having a short-term ability to heat up the body and give immediate strength. When sulfur is ingested it combines with substances in the stomach forming sulfides, including hydrogen sulfide. These substances can irritate the lining of the stomach and intestinal tract. If the gut is full of a lot of fatty substances this process is increased and can cause diarrhea.

Sulfur is known to help kill mites, bacteria and fungi. Sulfur may help reduce the physical symptoms of arthritis.

Sulfur is a major component of the hormone insulin, required to regulate blood sugar levels. It is essential in the body for bone, teeth, and the connective tissue collagen. The most common sources of dietary sulfur is eggs, fish, meat, garlic, milk. Cruciferous vegetables (i.e. kale, broccoli, cauliflower, and radishes) and wheat germ are also good sources of sulfer.

The Chinese knew about sulfur as early as the sixth century BCE. The tips of wooden sticks were wrapped in ropes that were dipped in sulfur. Once the sulfur dried the sticks could be rubbed together to easily start fires. The government had a monopoly on the manufacturing and selling of Chinese matches.

In China, the use of sulfur to create fire lead in the 11th century to the creation of gunpowder. The common name, “brimstone,” derives from the notion of sulfur being a burning stone.

The recommended daily intake for sulpfur from dietary sources is 800 mg per day.

Western antibiotics and anti-inflammatory pharmaceuticals can contain high amounts of sulfur, which some people are sensitive and/or allergic to.