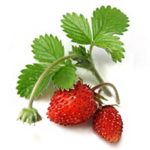 Shaped like a heart, strawberries are not only a delicious fruit, but both varieties (wild and garden) are well known for their antioxidant properties that can help support heart health and regulate blood sugar levels. One whole cup of strawberries contains less than 50 calories. Strawberry leaves are used medicinally to treat fevers, gout, and aid bowel regularity.

Strawberries are a perennial herb that is a member of the rose family. There are over 600 varieties of strawberries. Strawberries are not really a fruit or berry, but are in fact, an enlarged receptacle of the flower. The leaves are indented.

Strawberries thrive in the temperate climates of the Northern Hemisphere. 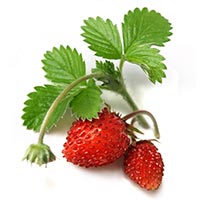 History/Folklore: The name “strawberry” has been attributed to the practice of placing straw under the plants during cultivation when the berries are ripening to help keep pests away. In fact, the name derives from the verb “strew,” referring to the tangle of vines which the plant strews along the ground while growing.

Strawberries grow wild in many of the temperate regions of the world. It was not until the 18th century that strawberry cultivation began to be taken more seriously. A hybrid between a South American strawberry and a North American strawberry is what became popular due to its sweet flavor and larger size than the previously more familiar wild strawberries. Because strawberries are perishable they remained a luxury item until well into the 19th century, when railroads helped transport the fresh berries longer distances.

The first written reference to strawberries in Europe is from the 10th century. The berries were also mentioned in a play by Ben Johnson in the 15th century.

An old traditional recipe for strawberries takes advantage of the malic acid in the berries using them to remove discoloration from badly yellowed teeth. Mashed and mixed with a bit of bicarbonate of soda, the mixture was left to sit on the teeth for about 5-8 minutes and the rinsed off with warm water. A fresh cut strawberry rubbed on the face was said to help whiten the skin and soothing sunburns.

The high levels of enzymes contained in strawberries helps them fight against the kinds of cell damage and inflammation that contribute to the aging process. A study conducted by Tufts University showed that rats exposed to radioactive energy suffered fewer aging effects (such as motor and cognitive functions) if given strawberry extracts than those rats who did not receive the extract.

Strawberries can be somewhat prolific and invasive in your garden. Wild strawberries will hurt relatively few plants, but they spread rapidly and can deplete soil of nutrients other plants craves. Borage (Borago officinalis) is a wonderful companion plant for strawberry and other plants too! Any plant in the cabbage family (broccoli, Brussels sprouts, kale, cauliflower and the like) will not do well if planted near strawberries. Likewise, tomatoes, mint and roses also do not like growing near strawberries.

Strawberries rank in the top 50 sources for antioxidants. They are ranked 27th overall and 4th among fruits (behind blackberries, blueberries, and raspberries).

On average eight strawberries will give you 120% of your recommended daily Vitamin C allowance.

Which Parts Can You Eat?

Strawberry roots, leaves and berries are all edible.