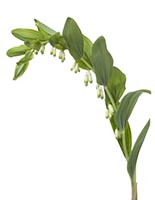 Solomon’s seal is edible and medicinal. It is best known for its ability to heal sprains, joint injuries, connective tissue and cartilage injuries, bruising, arthritis, and low back pain. It is also used effectively to treat dry coughs, chronic respiratory ailments, and digestive issues. It is useful for treating conditions associated with dryness. It is also used to aid postpartum recovery and menstrual cramps.

Want to Find Out More about Solomon’s Seal?

Solomon’s seal is in the family Asparagaceae. The plant can grow to be 18 to 24 inches tall and has gracefully arching, angled, unbranched stems. Solomon’s seals leaves are alternate, upright, parallel-veined, and oblong or lance-shaped. They are typically green or tipped white and turn a pretty yellow in the fall. Greenish-white tubular flowers on short pedicels droop from the leaf axils along and beneath the arching stems. The fruits are red or black berries. Solomon’s seal is found throughout the Northern Hemisphere. There are about 63 species found in Asia, and 20 that are endemic to China. It prefers shaded woodland areas in temperate regions.

History/Folklore: Solomon’s seal is best known for its ability to heal sprains, joint injuries, connective tissue and cartilage injuries, bruising, arthritis, and low back pain. It can be used to treat repetitive stress injuries, tendinitis, and broken bones. It is effectively combined with mullein and horsetail to help treat the kinds of injuries mentioned here and can also be combined with nettle to effectively treat joint pain and arthritis. The herb’s ability to “play nicely” with other herbs gives it a broad range of possible applications for healing injuries or muscular-skeletal complaints, especially those associated with dryness.

It is unclear how the herb actually works, but its impact on joint and synovial fluids is obvious and well documented. Some of its benefits come from its mucilage properties; however, mucilage does not typically transport well in the bloodstream (and therefore is less able to reach the joints), so this does not entirely address the root’s power as a lubricant to the joints and tendons. Only very small doses are needed to begin the healing process–sometimes only three to five drops per day over a week. The dosage can be increased if needed, but small amounts work quite well, typically in the range of five to ten drops per day.

Used topically as a wash or poultice, the herb can help heal injuries and bruises and ameliorate skin problems such as blemishes, poison ivy, hemorrhoids, and other similar skin ailments. It can be gargled with or used as a mouthwash to help strengthen gums.

Solomon’s seal tea can be a useful tonic for the kidneys, heart, and sexual organs.

Solomon’s seal root is edible and has been used by Native American tribes as a food and medicine for centuries; it has been widely used to help heal injuries, broken bones, and coughs. The Menominee tribes also used the herb as a smudge to revive unconscious patients.

The English herbalist John Gerard (c. 1545-1612) recommended Solomon’s seal to heal broken bones; he also claimed that in one or two nights it could take away bruises sustained by women who had stumbled “upon their hasty husbands’ fists.” Clearly in his times, women being beaten by their husbands was a common enough occurance to be noted as a condition for treatment.

In Oriental medicine, Solomon’s seal is most typically used to tonify the Spleen and Stomach, especially Spleen and Stomach Qi to improve appetite and reduce fatigue. It is used to moisten the Lungs, helping to ease dry coughs and sore throats, and to tonify the Kidneys, helping to reduce low back pain and weakness in the lower back. It is also used topically to heal bruises, skin ulcers, boils, and hemorrhoids.

In Chinese herbal shops, it is sold in slices; for a good-quality product, select slices with a nice golden to whitish color (but not bleached white). In Korea, the herb is used in a tea called dungulle. To make a tea, soak Yu Zhu in cool water for 10 minutes and then place in a pot with 3 cups of water; bring to a boil and then lower heat. Let it cook over low heat for 2+ hours. Check to be certain the water does not cook off; if needed, add more water. Considered safe, the herb is not recommended for those suffering from Spleen or Stomach Deficiency or with Phlegm-Damp.

A legend in China associates the herb with longevity. It is told that an abducted village woman escaped the royal palace where she had been taken and hid in the woods. She survived by eating just this herb, developing a slim figure and lovely smooth skin. When she returned to her village 60 years later, her neighbors were amazed to see that she looked the same as she had when she entered the palace so many years before.

The root is a starch-like food that was used to make breads and soups. The young shoots are also edible and can be eaten raw or boiled like asparagus. The roots should be boiled with three changes of water before being roasted and served as side dish. (The water can be save to be used medicinally.)

A typical proportion for making tea is about ½ tsp of dried root to 6 to 10 oz of water. (Remember, this is an herb that works well in small doses.) In decoction, typically 1 to 4 oz. taken 3 times daily is recommended.

The name Polygonatum, derives from the ancient Greek word meaning “many knees”. This refers to the multiple joints found in the rhizomes. The roots also bear depressions that resemble royal seals, possibly suggesting the common name Solomon’s seal (aka the Star of David). Another suggestion for the plant’s common name is that the cut roots resemble Hebrew characters. Still another notes that the “seals” on the rhizomes, where the stalks rise up, are a sign of the plant’s ability to “seal” and repair injuries. These “seals” appear when the plant dies back and the stalks fall from the root, leaving a scar behind that is similar to the Star of David.

Solomon’s seal is widely held to be a powerful protector able to ward off evil and attract success, especially in financial matters. It has been burned in ceremonies to help attract profitable career and business opportunities as well as to protect the home. The root is also used in magic to call upon the Elementals.

Generally, Solomon’s seal tea is best use for treating digestive ailments, coughs, and uterine and vaginal irritations. A tincture is best used to treat joint pain, broken bones, and tendonitis. Both can be used to help aid recovery after surgery.

In Afro-American herbalism, Solomon’s seal is known as High John the Conqueror, in reference to its abilities to conquer and heal injuries as well as treat male and female infertility. It was worn as a talisman or chewed for the strength to conquer one’s own fear or to stand tall in the face of others.

Lily of the Valley