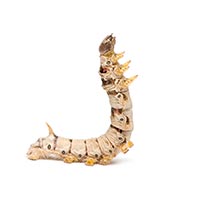 Not commonly used in the west, in China, street vendors sell roasted silkworm pupae as a snack. Silkworms have even been proposed for cultivation by astronauts as a space food for long-term missions. Used medicinally, silkworms are used for treating infant convulsions, preventing the signs of aging skin, treating sore throats and are highly effective for treating facial paralysis caused by stroke.

Also Known As: Bai Jiang Can, Can Sha (silkworm feces)

Bombyx mori is the silk moth larvae or caterpillar. It is an animal in the family Bombycidae. Their life cycle of larvae (or caterpillar) to moth is very short. They are covered in tiny black hairs. After they have molted four times, their bodies become slightly yellow and the larvae prepare to enter cocoons made of raw silk produced by their salivary glands.

Caution: It can cause allergic reactions (an acne-like rash, dry mouth or nausea) As silkworm has anticoagulant properties use with care if you have pre-existing bleeding disorders. Not recommended for pregnant women.

History/Folklore: Silkworm is a classic herb and has been used for centuries in Oriental medicine. It is noted in the oldest existing Chinese pharmacopoeia for treating infantile convulsions, submandibular lymphadenitis, skin itching, sore throat and more.

Extracts made from silkworm have strong anticoagulant properties and an alcohol extract made from the worms inhibits the breathing of human hepatoma cells making the worms a treatment for rectal-tumor type polyps.

Combined with fresh ginger the combination is used to treat swollen body and clenched teeth due to tetanus.

The name Bai Jiang Can (translates as white stiff silkworm) derives from the surface of the worms being covered in white mycelium and conidia. This powdering substance is known for have a good hypoglycemic effect.

Typical dosage is 3-10 grams, in powdered form the dosage is 1-3 grams and in tincture 2-4 ml. Good quality is thick, stiff, and white.

The herb Can Sha (silkworm feces) is also used to dispel Wind and Damp. It is more often used to help harmonize the stomach and prevent vomiting, diarrhea and cramping due to Damp in the Middle Jiao.

Silk was so valuable and protected by the Chinese producers that legends claim that a Chinese princess hid silkworms in her hair as part of her dowry, helping to smuggle them out of China. It is also said that Christian monks smuggled the silkworms out of China in the the first century AD and sold them to the Byzantine Empire.

Bombyx mori (silkworm) is the primary producer of silk.

Mahatma Gandhi was critical of silk production because of his belief in “do no harm to any living thing,” including the moths. His belief prompted him to promote cotton spinning machines as an alternate choice to silk