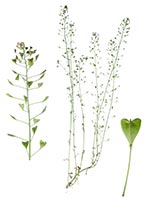 Shepherd’s Purse is famous for its ability to stop bleeding, especially in the uterus. It is used to heal wounds, bleeding from any internal organ for any reason, heavy menstrual bleeding for any reason from fibroids to endometriosis, to post trauma to the uterus caused by surgery. In China, the leaves are a popular ingredient in dumplings and the herb is used to “brighten eyes.”

Below is an overview of Shepherd’s Purse, combining and interpreting the best of Western Science, Traditional Chinese Medicine (TCM), Shamanism, Folklore and more. Gain a balanced and thorough understanding of the healing properties of Shepherd’s Purse.

It is a common weed of the Cruciferous order (the mustard family of plants) that is found all over the world. The main leaves are 2-6 inches long, and vary in form, either irregularly pinnatifid or entire and toothed. When not in flower, it is identified by its radiating leaves, of which the outer leaves lie close to the earth. The plant has numerous white small flowers that are self-fertilized and followed by wedge-shaped, also called heart shaped, fruit pods, divided by narrow partitions into two cells, which contain numerous oblong yellow seeds. It can be found blooming at almost any time of year.

Shepherd’s Purse is likely native to Eastern Europe or West Asiatic regions. It likes unoccupied wasteland areas such as fields and roadsides.

Caution: Dosing is important. The plant is edible. However, an overdose of shepherd’s purse extract might cause paralysis, difficult breathing and in very rare cases death.  Not recommended during pregnancy, as it can cause uterine contractions Use with caution, and under the care of a trained healer, if a person has a preexisting heart condition.

History/Folklore: Shepherd’s purse flowers all year round in Britain. Its common name derives from the resemblance of the flat seed-pouches of the plant to an old-fashioned leather purse.

In the summer, the plant extract has a sharp, acrid taste. Blending it into wine or spirits of juniper can help mask the strong flavor, making it more palatable. The leaves, which taste similar to mustard greens, can be eaten in salads, soups and other recipes and are harvested all year round. The seeds have a peppery taste and can be used as a substitute for mustard seeds or pepper.

Shepherd’s purse contains a protein that constricts smooth muscles that support and surround blood vessels, especially those in the uterus. Some of the plant’s other constituents may accelerate clotting. The herb has a long history of being used to help the womb return to normal size after childbirth.

Shepherd’s purse has been used to stop heavy menstrual bleeding due to uterine fibroids, endometriosis, birth-control devices such as IUDs, post hysterectomy surgeries and even peri-menopausal bleeding.

In China, the herb is blended with other herbs to help treat blurred vision and spots before the eyes. It is a popular ingredient in Chinese dumplings and shows up in Japanese and Korean cooking too. The flowers, leaves and seeds are edible. The leaves can be eaten raw or cooked. They are best when eaten before the flower stalks appear. Their flavor is similar to the taste of radishes, but less hot. They are not unlike mustard greens.

In Japan, it is tradition to mix shepherd’s purse with rice and barley gruel that is served on January 7th every year.

A simple tea can be prepared by using 1-2 tsp of shepherd’s purse in a cup of hot water and let steep for 10-15 minutes. The tea can be taken 2-3 times daily.

The seeds of the plant are a valuable food for small wild and caged birds. When poultry have fed on the plant in early spring it has been noticed that their yokes become a greenish or olive color and stronger in flavor.

A decoction of shepherd’s purse mixed with milk, is fed to check purging in calves.

A few drops of shepherd’s purse juice infused on a cotton ball will help stop a bloody nose.

1 ounce of shepherd’s purse to 12 ounces of water, reduced by boiling to ½ a pint is a typical medicinal formula. It can be strained and taken cold.

Shepherd’s purse can cause drowsiness, changes in blood pressure and thyroid function, and palpations. Dosage and the current state of health of a person are important factors before using this herb. Seek a trained healer for guidance.