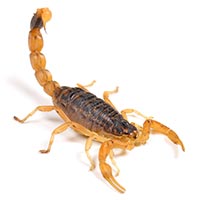 There are over 100 scorpion-based herbal formulas in Chinese Medicine. Modern studies have proved that Scorpions contain 17 amino acids and 14 trace elements that are essential to the human body, making it not only a medicinal substance but a nutritious food as well. Scorpion stings are painful, but usually harmless. Only 25 species are deadly. An image of evil, and a protector against evil, the scorpion is viewed by many cultures as an ancient healer and a cause of death.

Scorpions are in the Order of Scorpiones and in the Class Arachinida. There are over 1,500 species of which only 25 have lethal venom. They have an elongated body, eight legs, with strong claw-like appendages at the front and a curved tail with a venomous stinger at the back. On average they are about two inches long, but can be much larger depending on species.

Scorpions are found all over the world in a wide range of environments from dessert, to grasslands to rain forests. Typically in China they are caught in the Spring and Summer.  The ones caught between the areas of Qingming and Guyu, in China, are believed to have the best medicinal value. Scorpion habitats include caves, rock crevices, under dead leaves and in barks.  They hide in the daytime and come out at night to eat insects, spiders and other small animals.

History/Folklore: In China, there are 15 species with Buthus martensii being the most common. The dried body is the main medicinal source. Once captured they are soaked in water to allow them to spit out any dirt, and then are either boiled in water or salt water until they become stiff. They are then kept in a cool, dry place for drying and storing.

The oldest known fossil record of scorpions indicates that they evolved around 430 million years ago and may have had gills as they evolved out of the water and onto land.

Scorpions have been used for over 2,000 years in China as a surprisingly effective treatment for tremors and seizure type symptoms. These include nervous system disorders, cerebrovascular disorders, malignant tumors, stubborn viruses, tetanus, strokes and more.

Scorpion poisoning due to the venom is mainly a function of either overdose or allergic reactions. Dosages need to be carefully Monitored. Typical recommended dosage is 2-5 grams in decoction, or 0.5-1 grams in pills or powder. In addition the dose of the tail should be one third of that of the body.

The peptides in scorpions interacts with our bodies sodium channels helping to ease pain.

In North Africa and South Asia the scorpion is an important cultural image appearing in art. In Islamic art in the Middle East, the scorpion is used as a symbol of the Sufi dervishes power to vanquish evil. There is an old Afghan folk story that relates the tale of a scorpion that crawls into the Prophet’s shoe which is then grabbed by an eagle that flies off with it letting the scorpion fall to the ground and saving the life of the Prophet.

Unlike snakes, scorpions always come back and cannot be frightened away so housewives are particular about cleaning their houses making sure they never enter the house.  In South Asia, felt carpets are used as it is said that scorpions and tarantulas do not like to step on the fabric. In North India, rural locals use cow dung inside their houses on floors and walls as a preventive to scorpions.

Many cultures hold scorpions to be both the embodiment of evil and a protective force against evil. Some cultures also identify the scorpion with human sexuality. In Iran, a scorpion’s bite was so venomous that their was a saying about praying for your enemy to be stung by a Kashani scorpion. In popular Muslim folklore it is said that particularly dangerous scorpions inhabit hell.  It is also viewed as a protector against evil.

The Sinai wilderness was recognized as having lots of scorpions during the time of the exodus.

In Ancient Egypt, Serket, the goddess of fertility, nature, animals, medicine and magic was often depicted as a scorpion. She was also a protector of the dead, especially as venom caused stiffening, which further associated her with embalmers. Her name translates as “she who tightens the throat or she who causes the throat to breath.”  Her image is one of the earliest to be found on ancient artifacts as a woman with a scorpion on her head. The most dangerous species of scorpion lives in North Africa, so she was revered as an important goddess for her ability to heal venomous stings. As time moved on she became integrated as an aspect of the goddess Isis.

In Sumaria, the scorpion was associated with the sun, with ancient writings depicting scorpion-men as guarding and protecting the sacred gateways leading to ascension, pleasure and enlightenment.

In Buddhist tradition it is Mara, the opponent to the Buddha, who sends venomous animals like scorpions and snakes to destroy the Buddha. In Hindu, one of the destructive deities is the hag Vrsikodari, the goddess with the scorpion on her belly.

In Western astrology, the eighth sign is the sign of the scorpion. Personality traits of a person born under this sign are loyalty, passion, being dynamic, obsessive, manipulative, independent and observant.

Some people do keep scorpions as pets.

Scorpion based medicinal liquors and dishes are the most popular preparations, though powders and pill forms are also used.

Long-term use of scorpions is believed to improve health and prevent cancer.

Scorpions glow a bright blue-green when exposed to black light, due to the presence of fluorescent chemicals in their outer shell, called the cuticle.