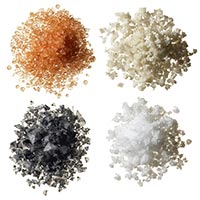 Salt is essential for life. It is one of the basic human tastes and makes up 0.4% of your total bodies weight. Salt plays a key role in the body as an electrolyte (aiding nerves and muscles to function properly) and as an osmotic solute (helping maintain the proper balance of fluids in the body). Too much salt can increase the chance of cardiovascular disease. Salt is one of the five herbal flavors in Traditional Chinese Medicine. It is identified with helping the body to dissolve stagnation.

Below is an overview of Salt (Yan), combining and interpreting the best of Western Science, Traditional Chinese Medicine (TCM), Shamanism, Folklore and more. Gain a balanced and thorough understanding of the healing properties of Salt (Yan).

Salt is present in large quantities in seawater, where it is the main mineral constituent. Salt is also processed in salt mines. The largest salt mine is the Sifto salt mine in Ontario, Canada. The second largest is the Khewra sat mine in Pakistan.

Parts Most Frequently Used: Mineral in crystalline or solute forms

Caution: Necessary for life, but too much salt can cause cardiovascular disease.

History/Folklore: From the very beginning salt has played a major role in the development of civilizations. Communities have always tended to be built either around sources of salt or near areas where it could be sourced through trade. For thousands of years salt has been the best preservative for meats. China has one of the oldest known archaeological sites for the production of salt. Both Romania and China have archeological sites that give evidence of salt being extracted from water that are over 8,000 years old.

The word “salary” derives from the Latin word for salt because Roman Legions were sometimes paid in salt, which was considered to be quite literally worth its weight in gold.

In Britain, the suffix “-wich” in a place name means the area was once a source of salt. Sandwich and Norwich are examples.

Salt has long been an important item for trade between many ancient cultures the world over. Prized for its flavoring and preserving properties. Nations have gone to war over salt. Venice and Genoa went to war over salt. An ancient practice in times of war was to scatter salt around a defeated city in order to prevent plant growth

In general, processed foods are very high in salt.

Epsom salts are popularly used to bath in to aid sore muscles and aches.

Salt is used in sacred ceremonies to cleanse and protect. Salt has been used to bless a threshold or invoke divine protection. In Buddhism salt is said to repel evil spirits. That is why it is customary to throw salt over your left shoulder before entering your house after a funeral, it will protect you from any evil spirits that may be clinging to your back. Salt is said to have a corrosive effect on a demon’s skin, burning them and keeping them away.

Salt has been used for many centuries to ward off evil spirits, and to celebrate weddings and housewarmings. It is often placed in the four corners of a room to cleanse and protect the space or as a line across your doorway to keep negative persons with bad intentions from entering. Salt was also a symbol of friendship. In ancient times, a gift of salt, was a gift of life, more valuable than gold as it was able to preserve foods.

Salt has many uses including the production of aluminium, soap and glycerine. It is used as an emulsifier in the manufacturing of rubber and it is also used in the firing of pottery, where it is used to make glazes.

Sodium chloride. Can contain other minerals and additives for health such as Iodine and Iron.

A simple saline solution is best for cleaning wounds.

Salt and Your Heart

Too much salt may cause cardiovascular disease, though new studies are now questioning this and refining our understanding of how salt is metabolized and used in the body.

Salt is used to cleanse and protect any environment from negative energies or spirits.