Sage has been considered one of the top medicinal and culinary herbs for centuries. This herb is easy to cultivate and has spirit cleansing properties. It is a mainstay in many herb gardens. Its powers as a healing remedy are considered best given in small and often-repeated doses.

How to use Sage and take FULL advantage of it's healing powers! 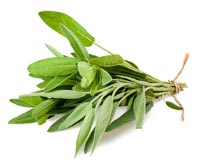 Sage belongs to the mint family and includes many diverse species and genera. Cultivars can vary considerably in size, leaf, flower color, and foliage pattern. Generally the leaves are grayish green and with spikes of spring flowers ranging from purple, blue, white, or pink. Sage can be harvested late Autumn to early Spring.

Sage is native to the Mediterranean region.

History/Folklore: Considered in Britain to be one of the essential herbs, along with parsley, rosemary, and thyme. Recipes for sage pancakes date back to the 5th century BC. It is both a digestive aid and appetite stimulant. Sage is also used to improve memory, cleanse the environment, and ease painful menses. It is also being noted for lowering blood sugar levels.

The Middle Ages generated many sayings referring to the plant’s healing properties and value, like “why should anyone die who has sage in their garden?” Sometimes called Salvia salvatrix, meaning “sage the savior,” since it was one of the ingredients of Four Thieves Vinegar, a blend of herbs that was supposed to ward off plague.

It was used by the ancient Egyptians as a woman’s fertility drug. And the ancient Greek physician, Dioscordise used the herb to stop bleeding wounds and heal skin ulcers and sores. He also used it to treat coughs, sore throats and heal sprains.

Sage contains over 160 distinct polyphenols which are each known for their antioxidant properties. One cup of sage tea twice a day significantly increased immune function.

Research has indicated that using both S. officinalis and S. lavandulaefolia for 4 months helped to improve learning, memory and cognitive function in individuals with moderate Alzheimer’s disease.

Sage can be applied externally directly on cold sores, mouth ulcers, and bleeding gums to help them heal. Research is also showing that a sage can be used as a spray to help ease sore throats and reduce swollen tonsils.

Spanish sage (S. lavandulaefolia), does not contain the compound thujone that is found in common sage (Salvia officinalis). Thujone is the compound that can be toxic in high doses.

People who used sage regularly in their diets seem to have a 54% reduced chance of contracting lung cancer compared to those who did not use sage.

Early research is indicating that sage extract used daily for an 8 week period can improve symptoms commonly associated with menopause, such as hot flashes, vaginal dryness, and night sweats. Sage contains estrogen-like compounds that allow them to bind to particular receptors in your brain to help improve your memory, treat hot flashes, and excessive sweating. It has a long history of use for reducing menopause symptoms.

A recent study has shown sage to be effective reducing blood glucose levels in rats with type 1 diabetes. Mice with type 2 diabetes that used sage tea showed the same effects as if they had been using metformin, a drug commonly prescribed to manage blood sugar levels.

In Oriental medicine, the variety Salvia miltiorrhizae is most commonly used. It is often identified as red sage root (dan shen) or Chinese sage. It is also native to the Mediterranean region. Sage is one of the most commonly used herbs in Oriental medicine. The common name, dan shen, refers to the roots reddish color and shen is a reference to ginseng (red shen), indicating the herbs importance and recognized healing powers.

Dan shen, Chinese sage (S. miltiorrhizae), is considered bitter, slightly cold and nontoxic, unlike common sage that contains the toxic substance thujone that can in large doses be harmful. It is popularly used to vitalize blood, calm, and build Qi (Energy).

Sage can be used as a hair rinse to help treat dandruff, as well as promote hair shine and growth. A 2% extract of sage can be applied to the skin to help soothe sunburns.

Sage has been used since ancient times to ward off evil and snakebites, as well as to increase female fertility.

Sage has long been a symbol for wisdom and immortality. In the Middle Ages it symbolized domestic virtue and in the Victorian era it meant a happy home and hospitality.

Charlemagne recommended the plant for cultivation in monastery gardens.

The “officinalis” in the plant’s name refers to sage’s medicinal roots. The officinal was the traditional storeroom of a monastery where these herbs and medicines were kept.

As sage is similar to rosemary in its ability to improve brain function and memory, it is being studied for constituents that could be used in treating Alzheimer’s.

How to use Sage to take FULL advantage of it's healing powers!