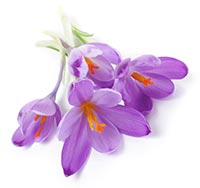 The dried stigmas of the plant produce saffron, the deep auburn colored spice with a sweet flavor. A single thread can flavor a whole meal. Saffron has been used as a dye, perfume, medicine, and offering to the gods. It is said to help lift depression and ease the emotions after a shock. It also helps asthma, coughs, clears acne and eases PMS.

Below is an overview of Saffron, combining and interpreting the best of Western Science, Traditional Chinese Medicine (TCM), Shamanism, Folklore and more. Gain a balanced and thorough understanding of the healing properties of Saffron.

Saffron is produced from the saffron crocus flower, Crocus sativus. It can grow eight to twelve inches tall and bears four flowers, each with three vivid crimson stigmas, which are the distal end of a carpel.  It is a male sterile plant.  They only flower in mid-autumn.

Saffron is native to Southwest Asia and some parts of Europe, including Greece, where it was first cultivated.  It is unknown in the wild and is thought to have been originally cultivated in Crete.  It likes hot, dry summer breezes and full sun.

History/Folklore: The dried styles and stigmas are called threads. It is described as having a hay-like fragrance, and the pigments impart a golden-yellowish tint to foods and textiles.  It has a recorded history that is attested in 7th century BC Assyrian botanical treatises and has been traded and used as a culinary spice, dye, and medicine for over four thousand years.

The Summerians used wild-growing saffron in their remedies and magical potions. The Perisans wove saffron into textiles that were ritually offered to their gods.  They used saffron in dyes, perfumes, medicines and body washes.  Saffron threads would be tossed over a bed and mixed into hot teas as a cure for melancholy.  Non-Persians feared their use of saffron as a drugging agent and aphrodisiac.

Alexander the Great used saffron infusions in his rice and baths as a cure for battle wounds. They took the Persian use of saffron-bathing back to Greece with them.

The Minoans showed saffron in their palace murals by 1600-1500 BC.  Ancient Egyptians and Greeks used saffron in scented waters, perfumes and potpourris used at court.  They also used it as divine offerings and as a medicine.

The Romans loved saffron and brought it with them when they conquered and settled in Southern Gaul, European production of saffron fell after the fall of Rome but it is said to have been brought back to France with the spread of Islam into Spain and Italy. The Black Death plague incited a spike in saffron usage as a counter to the disease. The theft of a shipment of Saffron in the Southern Mediterranean caused the fourteen-week-long Saffron War.

Chinese and Kashmiri accounts date the arrival of saffron into South Asia  between 2500-900 years ago.  Buddhist monks wear saffron colored robes, however the robes are not dyed with expensive saffron, but rather with tumeric or ochre, which were cheaper dyes to use.

Saffron is mentioned in the Chinese medical text, “Shennong’s Great Herbal,” which dates from 300-200 BC. By the 3rd Century A.D. saffron was referred to as being from Kashmir, where it was to be grown as offerings to Buddha. Saffron was brought to England around 1350, most likely to be cultivated in monastic medical gardens.

Saffron was brought to America by colonists around 1730 where the Pennsylvania Dutch cultivated it throughout Eastern Pennsylvania.

Iran accounts for 90% of the world’s production of saffron.  Persian is the first language in which saffron is referenced as a culinary spice.

Saffron contains 150 volatile oils and many carotenoid compounds.  Picrocrocin, is a bitter compound responsible for saffron’s flavor and its insecticidal and pesticidal properties.  As saffron is dried in the heat enzyatic actions split picrocrocin, yielding two compounds including safranal, the volatile oil that give saffron its aroma.

Saffron is divided into grades based on quality and age.  Those with the red tips only are the strongest, red with some yellow is the next strongest grade and mixed, also called “bunch”saffron, or all yellow saffron will have aroma but no dying ability.

Spanish grown saffron labeled La Manch is a protected status confirming the saffron is from a particular area in Spain and may be either general grade of very high quality saffron.

Italian varieties of saffron are said to be slightly more potent than the Spanish, with the most intense varieties coming from Iran.

“Aquila” saffron is grown exclusively on eight hectares of land in Italy’s Abruzzo region. It was brought to Italy by a Dominican monk from inquisition-era Spain.  Sardinia grows 60% of Italy’s saffron.

Soaking saffron in milk, broth or warm water before you use it helps bring out the herbs potency. The herb has a wide variety of uses but is most known for treating depression, helping skin disorders, reducing fevers and as an anti-inflammatory.

Culpeper recommended it for fainting fits and palpations of the heart. He called it the herb of the sun, or lion herb, as it was so useful for strengthening the heart.

Confectioners and liquors use saffron for its taste and color.

The stigmas can only be picked by hand as machines are not delicate enough.

It takes 250,000 stigmas to make just a half kilo of saffron, but one pinch is all you need.

100% real saffron has been shown to be as effective treating depression as some prescription medicines. Only ten strands are needed.