Rue is one of the oldest English gardening plants used for medicine. At one time holy water was sprinkled from brushes made of rue, giving it the name of the Herb of Repentance and the Herb of Grace. From earliest times rue has been used to protect against contagious diseases and infestations of fleas and other insects. The herbs disagreeable odor and bitter taste are only noticed in large doses. In small doses it is eaten as a food, used as a flavoring and has traditionally been a very popular medicine.

Below is an overview of Chinese Yams, combining and interpreting the best of Western Science, Traditional Chinese Medicine (TCM), Shamanism, Folklore and more. Gain a balanced and thorough understanding of the healing properties of Chinese Yams.

Rue is a hardy evergreen. The stem is woody in the lower part and its leaves are a bluish-green that are bi- or tripinnate. The flowers are in terminal panicles and are greenish-yellow in color. The first flower that opens has ten stamens and all the other flowers will have only eight.

Rue is native to Southern Europe. It can grow almost anywhere, but prefers sheltered dry environments. It does better in poor dry soils. 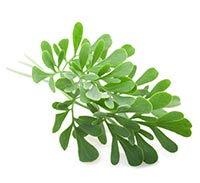 Caution: Do not take during pregnancy as it is very stimulating with abortifacient properties. Some people are allergic to the plant’s oils and can develop a severe rash. In excessive doses it is an acre-narcotic poison, use with caution and in small doses.

History/Folklore: Do not  confuse rue (Ruta graveolens) with goat’s rue (Galega officinalis) or meadow rue (Thalictrum species) these are both different plant’s.

Rue was most likely introduced to England by the Romans. The name “Ruta” derives from the Greek word “reuo” meaning “to set free”. This word was applied to the plant because of the herbs ability to treat so many illnesses, basically both setting the healer free to use it and the patient being set free from what ailed them. The Romans also used rue to purify objects made of iron (swords and other weapons for example).

Rue has long been used to prevent plagues and discourage fleas, scorpions, and snakes from entering the home. It is one of the herbs most known for its magical protective abilities and is commonly used in spells to ward off evil and protect the body, mind and spirit. It has been used by the early Roman Catholic Church in holy water to wash away sins and to perform exorcisms. This gave rise to one of the herb’s common names. Herb-of-Grace. Rue has a long history full of its use in magic, medicine and as a culinary condiment. The herb has also been called “Witchbane” as many people carried around bunches of the herb to keep witches away from them.  The phrase, “rue the day” is said to come from the practice of throwing rue at the enemy while cursing him. Rue is known to die easily if negative energies are present. In ancient remedies rue was viewed as a remedy for poisons.

Rue is said to help contain psychic forces and activate the soul when conditions require mental boundaries, clarity and taking responsibility. It aids discrimination and the empowering of a person’s will to be true to themselves.

The Greeks regarded rue as an anti-magical herb, because it was used as an effective remedy against the nervous stomach that can be suffered before meeting new people and strangers.  This type of upset stomach was believed to be caused by witchcraft. The Greeks also used rue to ease painful menstrual cramping or amenorrhea.

Rue has been used as a powerful guard against witches, and was used in many spells. In the Middle Ages it was believed that herb could enhance what was called “second sight” or physic abilities. It was said that rue grown under a fig tree was best for enhancing physic abilities.

Pliny reported that rue is useful at preserving eyesight so painters commonly used rue to maintain clear, focused sight. It is said that Michelangelo and Da Vinci both used the herb regularly for this reason.

Culpepper recommended rue for treating sciatica and joint pain. It was used as a protection against plague and pestilence.

In the 18th and 19th centuries, the Italians made amulets called “cimaruta” out of tin or silver in the shape of the tops of rue. They might add an image of fertility, crescent moons, fish, even the Sacred Heart of Jesus to increase or focus the amulets protective attributes.

Country folks would boil the herb with treacle and make a conserve of them. These leaves were used to treat croup in chickens and also cattle.

Oil of Rue is distilled from the fresh plant. 1-5 drops are a typical dose when using the oil. The oil can also be added to water that includes honey or sugar to sweeten the taste. Water best serves to extract the plants constituents and properties than wine or alcohol does. The oil is used as a fragrance in soaps and cosmetics.

Rue is grown both as medicine, condiment, insect repellent and ornamental plant in gardens. Cats do not like the smell of it and in India the plant is grown to repel snakes.

Among other traditional uses, rue was used as an aborticant mixed with other ingredients. As rue is highly poisonous in large doses any use of the herb taken internally is best approached under the care of a seasoned and trained healer.

Rue is an energetic and moving herb, helping to move energy and warm the body. It helps break up food, phlegm and stasis in the uterus, joints or muscles. It is primarily an herb that dispels cold and breaks up conditions of chronic stagnation.

Used sparingly, because of its bitter and potential to upset stomachs, it makes a good addition to spice mixes and is used in Ethiopian cuisine. It was once extensively used in kitchens but has fallen out of favor in today’s kitchens. The Romans used it a lot in their dishes, as did the Greeks. The bitter leaves can be added to eggs, cheese, fish and into wine to make a meat sauce. It was also used as flavoring in beer in the Middle Ages.

Rue is a symbol of sadness and bitterness.

Rue’s leaves have a powerfully disagreeable odor and in large doses, are almost nauseating to taste. In small doses, rue is added to foods as a flavoring agent and used as a condiment.

Rue-water sprinkled in the house is said to kill all fleas.

A leaf or two of chewed rue will have a refreshing aromatic flavor and help relieve headaches, hysterical spasms, or palpations.