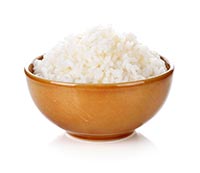 The word “Qi” used in Taoism, Traditional Chinese Medicine, and Martial Arts, means “life force, energy or breath.” It is derived from the two symbols of air and a bowl of steaming rice. If you want a good, strong life force: Eat rice! There is white, brown, purple, black, and reddish colored rices available. Brown rice is whole grain white rice with only the first outer layer or husk removed. White rice is brown rice that has been milled to remove the bran and much of the germ. This reduces the extremely high nutritional value of rice, giving white rice a lower nutritional value than brown rice. The ability of white rice to be easily absorbed by the body is the reason why many healing recipes in Traditional Chinese Medicine and Ayurvedic Medicine make use of white rice and not brown rice, which can be too difficult for some to digest.

Below is an overview of Rice (Bai Fan), combining and interpreting the best of Western Science, Traditional Chinese Medicine (TCM), Shamanism, Folklore and more. Gain a balanced and thorough understanding of the healing properties of Rice (Bai Fan).

Rice is the seed of the grass species Oryza sativa (Asian rice) or Oryza glaberrima (African rice). Rice is a mono-cot, normally grown as a perennial. It can produce crops for up to thirty years. Rice grows to be 3-5 feet tall depending on the soil and variety. It is labor intensive and requires lots of water. Rice is typically classified as long-, medium- or short-grained.

Native to China, Asian rice is grown on steep terraced hills or flooded flat lands, but it requires lots of water to grow.

History/Folklore: Rice is one of the oldest cereal grains. Brown rice is a whole grain rice and has more nutritional value than other types of white or long-grained rices. As a cereal grain, it is the most widely consumed staple food in the world, particularly in Asia.  It is the third largest agricultural commodity in the world, following sugarcane and maize.

Chinese legends attribute the domestication of rice to the legendary emperor of China and inventor of Chinese agriculture, Shennong. Archaeological evidence indicates that rice originates from a single domestication of 8,200 to 13,500 years ago in the Pearl River Valley region of Ancient China.

In Traditional Chinese Medicine rice is used to strengthen the body and enhance the complexion. Medicinally it is also commonly prepared as a congee, a kind of rice porridge or gruel, by adding more water to the boiling process. Adding more water allows the rice to be more easily digested by the very sick as well as allowing important herbs to be included that can help aid the healing process.

The Chinese have used rice water for centuries to help cure diarrhea and aid digestion. In India, rice water is used as an ointment to calm and soothe inflamed skin. Dried sprouted rice has also been used externally to aid digestion and tone muscles. Rice water is an excellent remedy for children and the very sick as it gently treats diarrhea, poor digestion, and fevers.

The word “Qi” in Chinese derives from the symbols for a steaming bowl of rice and the symbol for air. Taken together to describe “Qi,” the word comes to mean the essence of nutrition, health, vitality, life force, breath, energy flow, or upwardly and circulating or moving and transcendental energy. An energy that connects heaven, man and the material world. If “Qi” is written without the symbol for a bowl of steaming rice, it simply means “air.”

In China, during the annual Chinese New Year Festival, sticky rice cakes, called “Nian Gao” are eaten as a symbol of increasing prosperity for the New Year.

Long-grain rice is high in amylose, allowing it to remain mostly intact during the cooking process. Medium-grained is high in amylopectin, making it more sticky. The Italian dish risotto, and Japanese sushi use sweet medium-grain rice. Brown rice may be soaked for up to 20 minutes before cooking to stimulate germination which activates enzymes and enhances the amino-acid composition of the rice. Frying rice quickly in oil of fat before boiling it will reduce the sticky quality and is a technique often used in preparing rice pilaf dishes in Iran and Afghanistan or biryani in India and Pakistan.

The high potassium levels in rice (even white rice) help rice to eliminate excess weight caused by edemas and water in the body. Its high nutritional value can make it a good choice for lowering calories, especially when served with vegetables, beans or lentils.

Wild rice (Zizania or Porteresia) are not the same species as brown or white rices.

Of all the grains, rice has the highest absorption of protein.

How To Prepare Rice

To prepare rice, use one part rice to two parts water, bring to a boil and then lower hear to a simmer for 15 minutes.