There are hundreds of species of rhododendrons. Several of them are identified as being used in Oriental medicine and as a culinary food in Tibet and other areas of the world. Each variety in Asia is generally identified as being useful for treating what is called, “Phlegm.” In the West phlegm is associated with mucus, in Oriental medicine, it is associated with sputum, tumors, congestion, swellings, and more. This makes specific rhododendron plants useful for treating inflammation, joint pain, arthritis, asthma, coughs, and other phlegm related ailments. Azaleas are just one of the subspecies within the rhododendron family of flowers. New studies are confirming the plant’s anti-inflammatory, antioxidant, and liver protecting potentials. In Nepal, the flower (R. arboreum) is considered edible and enjoyed for the sour flavor and color it adds to dishes and beverages. Knowing which species and how to use it, is critical as all species of rhododendron (and by extension, azaleas) are highly toxic.

How to use Rhododendron and take FULL advantage of it's healing powers! 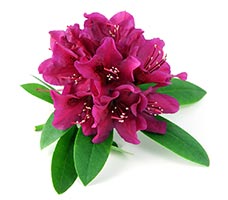 Rhododendrons like the temperate zones of the Northern Hemisphere and prefer to live near or under trees. They are native to Asia, Europe, and North America. They like to grow in coarse grasses and shrubs. It can also be found growing in thin pine woods. Azaleas and rhododendrons are now grown all over the world as popular ornamental garden plants.

Caution: R. Daurici (Dahurian), R. molle, and R. arboreum are the varieties most commonly used in Oriental medicine. At proper doses, and not used for long periods of time, rhododendron is appropriately used as a medicine to heal. Large doses are toxic. It is not recommended for pregnant women. All varieties of rhododendron are considered toxic. Symptoms of poisoning can include sweating, coma, chills, seizure, cardiac and respiratory arrest, and even death.

History/Folklore: Rhododendron and azalea share the same character in Chinese. Azaleas are in fact a subspecies of the rhododendron genus. Several rhododendron species have been used safely and effectively in Oriental medicine to help treat asthma, congestion, coughs, joint pain, chronic tracheitis, and more. Modern research is confirming rhododendron as having anti-inflammatory, antioxidant, and liver protecting potentials. Rhododendron and azaleas are also both highly toxic, some species more so than others, knowing which to use and how to use them is critical.

Studies of R. dauricum, a species often used in Oriental medicine, have revealed the presence of numerous flavonoids in the leaves and twigs. This includes the compound farrerol that is known for moving phlegm and alleviating coughs. Each variety of rhododendron is generally identified as being useful for treating what is called, “Phlegm.” In the West phlegm is associated with mucus, in Oriental medicine, it is associated with mucus, sputum, tumors, congestion, swellings, and more.

Other flavonoids present in R. dauricum and R. arboreum show anti-inflammatory, anti-bacterial, and antioxidant properties. Some of these same flavonoids exert vasodilatation and myocardial preservation in vascular smooth and cardiac muscle cells. The plant and its constituents continue to be studied for possible development of a potent drug that could be used for treating cardiovascular disorders.

There are about twenty different species of rhododendron commonly referred to in the Oriental Medicine Materia Medica, all are toxic, some more than others, and while some may overlap in properties, each can also have its own particular application or recommended use.

The leaves of the variety R. arboreum/Shu Xing Du Juan (Treelike Rhododendron) native to Tibet, are used externally for their astringent properties. They are made into a paste or poultice that can be applied to the forehead for treating headaches. A juice made from the bark of this plant is used to treat coughs, diarrhea, and dysentery. A tea made from the flowers is used to prevent vomiting and a juice made from the flowers can help ease menstrual disorders and is enjoyed for its nutritional value and flavor. The flowers are also dried and powdered for use in foods and drinks. In Tibet, the tender spring leaves of this species are used as a cooked vegetable, the flowers are eaten raw or cooked (especially enjoyed in fish curry dishes for their sour flavoring and color). The flowers are also pickled by adding salt and chili. As always, with rhododendron, large quantities are not recommended as large doses of the plant can cause intoxication.

A juice, known as burans or buransh, is traditionally made from the flowers (R. arboreum/Shu Xing Du Juan (Treelike Rhododendron) in Nepal and it is a popular beverage and culinary ingredient used for making Indian curries, bread, chutney, and even pakoras. The juice has a lovely raspberry color and a sour, slightly sweet flavor. It will have a jelly-like texture and is rich in potassium, calcium, iron, and vitamin C. It is enjoyed as an appetiser or to help cure mountain sickness or stomach upsets due to high altitudes.

Rhododendron honey, also called, mad, wild, or toxic honey, has been used since ancient times as a medicine. It is made by honeybees that collect nectars from rhododendron flowers. It can cause severe vertigo, arterial hypotension and bradycardia if consumed in large amounts. In medicinal amounts, the honey has been shown in studies to help lower blood sugar and lipid levels, while also exhibiting antibacterial, antifungal, antioxidant, and antimicrobial properties.

Mad honey is a honey made from a specific type of rhododendron plant, used for medicinal purposes only it can cause hallucinations. In fact, this honey contains a neurotoxin found in rhododendron and also azalea plants. The honey is harvested from high cliffs where the bees build their nests. Untreated cases of severe intoxication can have symptoms that can last up to 24 hours. Studies have linked the honey used medicinally, as effective for improving heart health, healing wounds, and cleansing blood.

Rhododendron contains chemicals that can lower blood pressure and interfere with the electrical activity of nerves. At low doses it can reduce pain. At higher doses it is toxic and poisoning.

The grayanotoxins found in rhododendron plants can disrupt sodium channels impacting the skeletal and cardiac muscles. All parts of the plant are considered poisonous, and ingesting as little as 0.2% of an animal’s body weight has resulted in poisoning.

The name “rhododendron” derives from the Greek words for “rose” and “tree”.

In Asia, R. arboreum/Shu Xing Du Juan leaves can be used to produce a juice that has traditionally been sprinkled in beds and on linens to prevent bed bugs and lice. The wood of this tree is also used in Nepal for making tools, small buildings, and fences. The wood is also an excellent source for fuel as it burns long and warm.

In China, azalea is also known as “thinking home bush” (Si Xiang Shu). The plant is immortalized in poetry by Du Fu.

In Japan, there is an annual azalea festival held in Higashi Village which contains over 50,000 blooming azalea plants.

Azaleas are the symbol of the city Sao Paulo, Brazil. Rhododendron is the national flower of Nepal.

The flowers can be a symbol of caution and danger.

In Nepal and other parts of Asia, rhododendron tree flowers are juiced to make a juice concentrate that is used medicinally and in curry dishes and beverages.

Azaleas and rhododendrons were once so infamous for their toxicity that to receive a bouquet of the flowers in a black vase was considered a well-known death threat. In their day, they were used as poison.

A certain variety of rhododendron contains a neurotoxin that can cause hallucinations and be harmful if used in high doses or inappropriately. The honey made from the flowers is called “Mad Honey”. It is not recommended for general use, but is used effectively as a medicinal honey used by trained professionals.

How to use Rhododendron to take FULL advantage of it's healing powers!