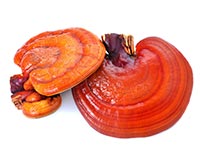 Below is an overview of Reishi, combining and interpreting the best of Western Science, Traditional Chinese Medicine (TCM), Shamanism, Folklore and more. Gain a balanced and thorough understanding of the healing properties of Reishi.

Key Actions: There are six different types of G. lucidum. Each mushroom is classified by color and each has slightly different properties. The most commonly used and most potent is the red variety. Calms Shen, Tonifies Wei Qi and Blood, Nourishes the Heart, Supports Shen, Removes Toxicity, Disperses Accumulations, Supports the Three Treasures (Jing, Qi and Shen)

Reishi mushrooms encompasses several fungal species of the genus Ganoderma. They are polypore mushrooms that are soft corky and flat, with a red-varnish, kidney shaped cap. They do not have any gills on their undersides. They grow as a parasite or saprotroph on a wide variety of trees.

They grow in the Northern Eastern Hemlock forests, with a worldwide distribution in both tropical and temperate geographical regions.  In nature, Ling Zhi particularly grow at the base of deciduous trees, especially maple trees.

Caution: Non-toxic, can be eaten daily.

History/Folklore: The botanical name, “Ganoderma” derives from the Greek and Latin roots meaning “brightness or sheen” describing the appearance of the mushrooms caps.

The Japanese name is Rieshi. Other words for Reishi can be translated as “sage mushroom, grandchild ladle and departure mushroom.”

Ling Zhi mushrooms have been used in Chinese Medicine for over 2,000 years , making them one of the oldest mushrooms known to be used medicinally. They were originally thought to be an elixir of life for gaining immortality.  As such, they were valued by Taoist monks for both their properties of increasing health and aiding the development of spritual experiences and understanding. Ling Zhi was said to “absorb earthly vapors and leave a heavenly atmosphere.”

In China, only two or three out of 10,000 aged trees still have Ling Zhi growing at their bases, making the wild variety extremely rare. In Japan 99% of all wild mushrooms are found on old Japanese plum trees, but are so rare that only a few are found per 100,000 plum trees.

Often described as being “tough” and “woody” with a bitter taste. Reishi is often traditionally prepared as a hot water extract, tea or decoction, that is brought to a boil and then left to simmer for up to two hours.