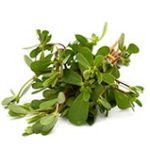 Considered a weed in many areas, it can also be eaten as a leaf vegetable and used as a medicine. Eaten raw it is crunchy with a light lemony flavor delicious in salads and sandwiches. It has long been used as food in the Mediterranean region and as a medicine in Traditional Chinese Medicine. In China, it is often described as a longevity herb.

Purslane is an herbaceous annual succulent in the family Portulacaceae. It has smooth, distinct reddish, mostly prostrate stems and alternate green leaves that cluster at the stems joints and ends. The leaves are soft, succulent and spoon-shaped. It’s yellow flowers have five regular parts and can appear at any time during the year. Purslane has a taproot with fibrous secondary roots.

Purslane is assumed to be mostly anthropogenic extending from North Africa, Southern Europe, the Middle East, the Indian Subcontinent, to Malesia and Australia. It is not yet clear how or when it reached North America.

Purslane is widely used in East Mediterranean countries. The Roman herbalist, Pliny the Elder, advised wearing the plant as an amulet to expel all evil.

The betalain alkaloid pigments in purslane are potent antioxidants. Well known and documented for their anti-inflammatory and antioxidant properties.

In juice form the herb has been used to relieve dry coughs, shortness of breath and externally to treat inflammation and sores.

Traditionally it was thought to cool the liver and be excellent for treating hot ailments such as headaches, restlessness or insomnia due to heat. The 17th century herbalist Culpepper said the herb could be “applied to gout, it easeth pains thereof, and helps the hardness of sinews, if it come not of the cramp, or a cold cause.”

The herbalist Mrs. M. Grieves, indicates that “the seeds, bruised and boiled in wine, were given to children as a vermifuge.”

Purslane is a common plant in many parts of India. Australian Aborigines use the seeds to make seedcakes. The Greeks use the leaves and stems with feta cheese, tomato, onion, garlic, oregano and olive oil. They add it to salads, boil it, and add it to casseroled chicken. In Turkey the plant is also bake in pastries and cooked similarly to spinach. In Egypt it is cooked in a vegetable stew. In Pakistan, it is cooked in stews with lentils. The older thick stems can be pickled in salt and vinegar to save for winter salad toppings.

The common name, “Verdolaga”, associated with the plant in South Africa is a nickname for football clubs with green-white color schemes in their uniforms.

Purslane is able to tolerate poor contracted soils and drought. As a companion plant it provide ground cover to create a humid microclimate for nearby plants, helping to stabilize ground moisture. Its deep taproot helps bring up moisture and nutrients used by other plants. Purslane helps break up contracted soils allowing other plants to follow after it making it a beneficial weed in places that do not already grow it as a crop in its own right.

Purslane is mentioned in the Bible as a repulsive food.

The stems, leaves and flower buds of purslane are all edible. Enjoy them in salads, stir-fried or in soups or stews.

Purslane has more omega-3 fatty acids than any other leafy vegetable plant and more than some fish oils.

The hairy-stemmed spurge (Euphorbia vermiculata) is poisonous and is sometimes mistook for purslane (Portulaca oleracea). Unlike purslane, it has hairy stems, milky sap, and a red tear-shaped spot in each leaf. Be sure of your identification before eating!