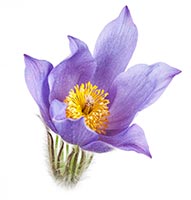 Pulsatilla is known for its ability to help rest and repair the energies of the body.  It relaxes the adrenals helping to calm anxiety and soothe the effects of constant stress. It is an excellent herb for anyone feeling truly burnt out, chronically afraid and exhausted. It is an excellent remedy for nervous or stress induced insomnia. Pulsatilla is considered one of the top 50 herbs in Traditional Chinese Medicine. It is popularly used in homeopathy, by Native American peoples and European herbalists. The 35 different species of pulsatilla are all similar in their medicinal uses.

Pulsatilla is a perennial plant with simple, erect stems that grow to be 3-5 inches tall. There are over 33 species. The whole plant is covered with silky hairs. The majority of leaves develop after the flowers and are two to three times deeply pinnately cleft to the base, in long, linear segments. The flowers are solitary, terminal, pendulous, deep-purple or violet-brown with six sepals.

Pulsatilla likes a well-drained, light, but deep soil and will flourish in peat or leaf soil, with the addition of lime rubble. The plant is found in Europe from Turkey, Russia, Germany, England, Sweden, to France. It grows in Asia in open fields, hillsides and pasture grounds.

Caution: This is a low dose plant. Never use more than 1-5 drops. Overdose can dramatically lower the heart rate and cause mental confusion.

History/Folklore: In one sentence, pulsatilla is most known for treating painful conditions of the reproductive and digestive systems, helping patients to sleep better.

The plant’s common name, Easter Flower, derives from the flower’s blooming during the Easter season, April to June. It is generally recommended that the plant be harvested soon after flowering. Made into a tincture and properly stored, some say it will last up to one year, but not longer. All species of the plant wilt very quickly.

It is recommended that the plant be placed in alcohol after being dried to insure its medicinal value. Alcohol is thought to be the plants best menstruum (the liquid used to extract the medicinal properties from the plant). Commonly 2 lbs of fresh plant are used in 4 pints of strong alcohol (100% vodka for example), then expressed and filtered.

Anemone pulsatilla (Pulsatilla) is commonly blended with Meadow Anemone (A. pratensis), which belongs to the same order of plants, the combination is sometimes only called “pulsatilla.”

Used topically, pulsatilla, can be an irritant.  When chewed it can be numbing or provide a tingling formication. Taken internally in overdoses, it acts as a gastric irritant, even causing vomiting, constriction in the chest and weakness. High doses constrict the heart.

The Blackfoot Americans Indians used the herb to induce abortions and to aid childbirth.

The plants most important function is to allay irritation of the nervous system in weak or very sick people. Allowing them to rest, recover and facilitating the use of other healing tonics and medicines. While the plant has a wide application, it is particularly useful treating conditions in which the mind or mental states play a prominent role. It is the remedy for nervous women.

The herb is beneficial for treating nervous exhaustion in women. This is a person who weeps easily, appears despondent. A tendency to brood over real or imagined trouble, restlessness, sadness, nervous depression, are all factors that pulsatilla is good for treating. If suffering from insomnia and nervous upset is the cause, pulsatilla is a good remedy.

The herb is also used to treat disorders of the reproductive organs of both sexes. Amenorrhea, dysmenorrhoea, leucorrhoea, uterine colic, ovaritis, sluggish, weak labor-pains are sometimes remedied with pulsatilla. Spermatorrhoea, orchitis (swelling of the testicales) and prostatorrhoea can also be treated with pulsatilla.

Which do form do you use? The dried or fresh plant? There are two main schools of thought. One is the Western, American school which suggests that only a tincture of the fresh plant has any use, and the second point of view, largely from England, that only the dried plant in tincture ought to be used in order to remove the unsafe effects of the plant’s strong constituents.

In Traditional Chinese Medicine, pulsatilla is often included to help support other tonic and calming herbs within many healing formulas.  In China, it is the root rather than the whole herb that is used. The roots are long cylindrical, twisted and slightly flat.  Their skin will be yellowish-brown, with irregular vertical wrinkles. The texture will be hard and crisp. They are bitter tasting. Typical dosing of the root in Traditional Chinese Medicine is 9-15 grams in decoction.  Bai Tou Weng Tang (Pulsatilla Decoction) is a well-known Chinese formula used for treating acute dysentery, sore stomach and frequent urge for a bowel movement with nothing coming out.

In China, the roots are harvested in spring before the flowers bloom or in the autumn after the leaves turn yellow. They consider this herb to be the “King herb” (meaning the best) for treating any kind of dysentery due to Heat. It effectively treats bacterial or amoebic dysentery.

The Chinese name, Bai Tou Weng, derives from the head of the root being white and hairy, like a “Hoary-headed Geezer.”

The constituent, anemonin, is a crystalline tasteless substance that is a powerful irritant and in over-dosing can cause gastric-enteritis. It can significantly depress circulation, respiration and and the spinal cord causing death without convulsions.

Doses of only 2-3 drops in water will help ease spasmodic coughing associated with asthma, whooping-cough and bronchitis.

Pulsatilla is a popular ornamental flower for the garden. It is an ideal ground cover as it blooms early and remains a dwarf.

The juice of the purple sepals can give a greenish stain to paper or cloth, but it is not a permanent dye or stain. The color has been used to dye Easter and Pashal eggs.

American pulsatilla (Pulsatilla nuttaliane) is found in Mississippi and is commonly used to treat colds, anxiety, and rheumatism of the knees.

Pulsatilla is strong. A safe dosage is considered to be 1-5 drops and never more than 10 drops.