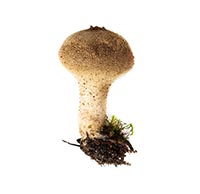 In Oriental medicine, the puffball mushroom is commonly used to treat swollen and sore throats. It is actually the dried fruiting body of several mushrooms. The three most commonly used are: Laisophaera fenzlii Reich, Calvatia gigantea Loyd, and Calvatia lilacina Loyd. They are all spherical in shape and are edible when they are young. They are also used to stop bleeding including nose bleeds and even traumatic hemorrhaging.

Below is an overview of Puffball (Ma Bo), combining and interpreting the best of Western Science, Traditional Chinese Medicine (TCM), Shamanism, Folklore and more. Gain a balanced and thorough understanding of the healing properties of Puffball (Ma Bo).

All varieties grow large, some can grow to be as much as 10 lbs!

Lasiosphaera fenzlii is oblate or spherical. It is about 15-20 cm in diameter, with no base. Its peridium is gray-brown, papery and often broken off in blocks or flakes. The body is light brown to brown, compact, flexible and has grey-brown cottony filaments when it is shredded. Its spores are easily released and appear as dust.

Calvatia gigantea also has little or no base. Its peridium consists of yellow-brown membraniform exoperidium and a thicker grayish-yellow endoperidium. It is smooth, hard, brittle, and also peels off in blocks. Its spore body is pale green-brown.

Calvatia lilacina looks like a spinning top. It is 5-12 cm in diameter and as a base. Its peridium is thin, two layered, purple-brown, rough, wrinkled, and with circular depressions.

Puffball is found in deciduous forests and grows in a tropical climate. It can be found in China, Europe, and North America, in particular the central and eastern United States and Canada.

History/Folklore: In China the puffball is emblematic of an excellent doctor who uses effective, inexpensive, and ordinary substances to cure people. They are considered excellent for treating swollen and sore throats, coughs and to help stop all kinds of bleeding, though they are especially popular for treating external wounds.

Traditionally a piece could be torn of and applied to bleeding injuries or gums. To aid sore throats it is used in decoction or mixed with honey into pills that can help cure chronic coughs. If adding this herb to an herbal decoction, add the powdered puffballs by wrapping the substance in cheesecloth. Puffballs are most commonly powdered but can also be made into an extract. When used in decoction a typical dose is 1.5-4.5 grams.

It is considered excellent for treating throat diseases with bleeding and ulcers as puffballs also stop bleeding and help heal sores.

Puffballs are used to stop bleeding internally and externally. It is best for topical use, but is used internally when the cause of bleeding is due to internal heat causing hematemesis, hemoptysis, and epistaxis. For traumatic bleeding the powder is applied directly on to wounds. This includes knife wounds, post-operative wound bleeding or nose bleeds. 3-6 g is the typical dosage for use in decoction to be applied externally for healing wounds.

The constituent calvacin is known to inhibit cancer. It is sited as one of the first substances with antitumor activity to be isolated from a mushroom.

If the mushrooms are still white they are too young to harvest. In the wild they will often re-appear in the same place each year, making some suspect that they may in fact be mycorrhizal rather than saprotrophic, but this remains to be resolved. They can be found growing in large circles, called “fairy rings.” They can grow to be as large as a football.

The trillions of spores the mushrooms produce are what are used to stop bleeding.

The young white puffballs are edible, the older brown puffballs are not edible. They are described as either having no taste, but great at absorbing the flavors of the sauces and foods they are cooked with, or as having a rich, earthy, and nutty flavor. The biggest concern with harvesting puffballs in the wild is properly identifying them and making sure you are picking them at the right age.

A true puffball will have a thick, hard, white flesh inside. Do not eat anything with a brown, yellow, purplish or black interior as this might indicate the mushroom commonly called earthball (Scleroderma citrinum). They can cause nausea and are not what you want to be eating. The white flesh should be solid with no gills. If there are any gills, discard immediately. Some species can fool you with a tissue that surrounds the mushroom when they are young, called a “universal veil,” making you think it is a puffball when it isn’t. Some species, such as Aminita, are deadly, so correct identification is crucial. Only eat those puffballs that have no gills and have not formed spores.

Popular recipes for cooking puffballs include sauteing them with alone or with vegetables, stir fried, or used in place of eggplants in any recipe.

Puffballs are being conserved in Norway and are becoming more rare in other parts of Europe as well. Poland now protects them from foraging.

They have been used by beekeepers in Britain as kindling placed below hives to help make the bees sleepy. It had been thought the smoke had narcotic effects on the bees, but this has been proven to be false, it was simply the smoke that sedated the bees.

Puffball soup is a popular, highly nutritious, and tasty soup. You want to be sure that none of the mature spores remain within the mushroom as they can be poisonous.

The best puffballs are big, elastic, with thin peels and a grayish-brown color.

Puffballs can be used to stop bleeding caused by trauma. This includes knife wounds, post-surgical wounds, and simple nose bleeds.