Pot Marigolds, also known by their Latin name, Calendula, can be used to treat wounds. It is like arnica, only milder and gentler and therefore can even be used on open wounds. This beautiful flower has a long history in India and the West as being sacred and is used in religious ceremonies and rituals. It is a food, a medicine and a wonderful addition to your garden. Do not confuse pot marigold with marigolds of the Tagets genus, which are commonly grown in vegetable and ornamental gardens.

Below is an overview of pot marigold, combining and interpreting the best of Western Science, Traditional Chinese Medicine (TCM), Shamanism, Folklore and more. Gain a balanced and thorough understanding of the healing properties of pot marigold.

Take FULL advantage of the healing powers of this herb! 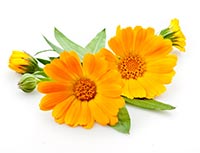 What are the benefits of Pot Marigold? How can it be used? Get Eastern and Western perspectives about how and why Pot Marigold (Jin Zhan Ju) works. Get recipes, gardening tips, insights, and much, much more.

Pot Marigolds (Calendula) are a genus of about 15-20 species. There are four basic species: African, French, Triploids and Single Marigold each with several sub-types in each of the various varieties. They are annual and perennial herbaceous plants in the daisy Asteraceae family. Pale green oblong leaves that are hairy on both sides with golden orange flowers.

Native to Southwestern Asia, Western Europe, Macaronesia, Egypt, and the Mediterranean. Pot Marigold (Calendula) is now naturalized in most parts of the world. They grow well in ordinary well-drained garden soils and need little attention.

Caution: Considered safe, Calendula is not recommended for those who have allergies to members of the Asteraceae family (feverfew, chamomile, or echinacea). Caution during pregnancy as the herb can stimulate the uterus.

History/Folklore: Calendula (Calendula officinalis) is often commonly called pot marigold or English marigold. The name refers to about 20 species of edible flowers from the daisy family. The calendula species are not the same as the flowers of the genus, Tagetes, also commonly known as marigolds.

Only the common deep orange-flowered variety of calendula is considered to have medicinal value. Calendula is said to bloom during every month of the year. The flowers open from nine in the morning till three in the afternoon (or with the movements of the sun), hence the name “calendula” deriving from the Latin for “little calendar” or “little clock.” This name also signified the start of the new lunar cycle, a time when the flowers were said to be in full bloom. Old English authors called it Golds or Ruddes.

It has been associated with the Virgin Mary and by the 17th century, with Queen Mary. The name “Marys Gold” refers to the flowers use in many rituals and ceremonies, including the wearing of crowns or garlands in early Catholic events in some countries.

The flowers are sacred in India and have been used to decorate the statues of Hindu deities since ancient times. They are often used as a less expensive dye than saffron for creating the highly valued orange colored fabrics worn by monks. The flowers are dried and used in broths that are said to calm the heart and spirits. They are a common ingredient in German soups and stews, which is where the name “pot marigold” derives from.

They have been accredited with drawing out evil humors from the head and strengthening eyesight. Culpeper said, “They strengthen the heart exceedingly… a little less effectual in the smallpox and measles. The juice of marigold leaves mixed with vinegar, and any hot swelling bathed with it, instantly gives ease.” Infusion of one ounce to a pint of boiling water is given internally in doses of a tablespoon, and externally as a local application. The flower rubbed directly on a bee or wasp sting was said to aid the pain and swelling. The leaves eaten in a salad, have been considered useful in treating scrofula in children. The ointment and lotions made of pot marigold are excellent for treating skin disorders, sprains and muscle pain.

The flowers were used on the battlefields during the American Civil War as well as in World War I on open wounds to help promote healing. Pot marigold works to heal wounds quickly so be sure all open bruises and wounds are thoroughly cleansed and that there is no infection present as it promotes rapid recovery and tissue repair.

Pot marigold’s milder and neutral qualities make it more suitable for treating mild infections than the more aggressive pungent, warm, and antibacterial herbs such as garlic and myrrh. Pot marigold is an excellent astringing and decongesting herb which will help treat swellings and blood congestion as well as stop bleeding.

The best to time to harvest pot marigolds is in the summer, in the heat of the day when the resins are high and the dew is evaporated. Carefully dry the flowers at low temperatures in order to help keep the flowers vibrant colors. Often planted along side spinach in the garden where the two types of leaves were often combined and eaten together.

In Ayurvedic medicine the plant is considered cooling with a bitter and pungent taste. It is used as a vulnerary, antispasmodic, alternative and treat wounds, bee stings, and as an eye wash. American Indians used the herb to treat upset stomachs.

The color of ornamental fish that are bred in captivity can be intensified by the addition of pot marigold flowers into their diets. It is said that by just looking upon the flowers you could strengthen your eyesight, while a tincture can aid red eyes and cure headaches.

In one small study of about 250 women undergoing radiation after surgery for breast cancer, Calendula ointment was found to have better results than a commercial ointment.

Used on Smallpox and Measles

A decoction of pot marigold flowers is used to bring out smallpox and measles, in the same manner as saffron. Pot marigold is often used for children diseases as it is safe and effective.

A yellow dye is extracted from pot marigolds by boiling it. The dried flowers can be eaten and also used to color cheese, puddings, or as a replacement for saffron.

Take FULL advantage of the healing powers of this herb!

What are the benefits of Pot Marigold (Jin Zhan Ju)? How can it be used? Get Eastern and Western perspectives about how and why Pot Marigold works. Get recipes, gardening tips, insights, and much, much more.
Start My Health Session!