Pomegranates are moderate in calories and an excellent source of dietary fibers. They are considered a “super fruit” because of their important nutritional value and antioxidant properties. Regular consumption of pomegranate juice has been found to be effective against diabetes, lymphoma, and BPH (benign prostatic hyperplasia). Pomegranates are a worldwide and ancient symbol of fertility and prosperity. The Spanish introduced the fruit to the Caribbean and Americas. Their leaves and flowers are used to treat burns.

Below is an overview of pomegranate​, combining the best of Western Science, Oriental Medicine, Traditional Chinese Medicine (TCM), Shamanism, Folklore, and a wide range of healing modalities. Gain a balanced and thorough understanding of the healing properties of pomegranate.

How to take FULL advantage of Pomegranate's healing powers... 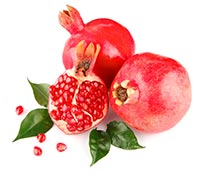 CHECK OUT my Online Course about Pomegranate. Dive deep into the benefits and applications of Pomegranate from Eastern and Western perspectives and much, much more!

Pomegranate is a fruit-bearing shrub or small tree in the family Lythraceae. The fruit is bright red, purple or orange-yellow depending on the cultivar with a thick leathery outer layer. The inside has a white spongy membrane that holds and separates the individual sections that contain sacs, called arils, that are filled with edible juicy pink pulp surrounding a single seed. The leaves are opposite or sub-opposite, glossy, narrow and oblong. The flowers are bright red with three to seven petals. The edible fruit is a berry, varying in size from a lemon to the size of a grapefruit. This berry is filled with the seeds that are surrounded by the watery-pulp.

Pomegranates are believed to be native to Persia (Iran) and the Sub-Himalayan foothills of Northern India. They are now cultivated all over the world. They prefer drier climates.

History/Folklore: The name “pomegranate” derives from the Latin word “pomum” meaning “apple, and “granatum” meaning “seeded.” The whole name translating as “seeded apple.” The ancient Spanish city of Granada is named after the pomegranate with the city using an image of the fruit on its heraldry.

Pomegranates are long lived with some species being as old as 200 years of age. They are a worldwide and ancient symbol for fertility, life, death, reincarnation, prosperity, eternal life and marriage.

Pomegranates have been found in the tomb of Queen Hatshepsut in Egypt and archeological sites in Jericho in the West Bank, dating back to the early Bronze Age. The Ancient Egyptians regarded pomegranates as a symbol of prosperity and ambition. They used it as a remedy for tapeworm.

The myth of Peresphone, the goddess of the underworld, uses pomegranate seeds to quench her thirst while she is a prisoner of the underworld. To this day, in Greece, the pomegranate is given as a gift to new homeowners. The fruit is placed under the home-altar of the house as a symbol of abundance, good luck and fertility.

Pomegranates appear on the ancient coins of Judea. When not in use, the handles of Torah scrolls are sometimes covered with decorative silver globes similar in shape to pomegranates as pomegranates symbolize the mystical experience in the Jewish mystical tradition, called the kabbalah.

The first incontrovertible image of Christ in a mosaic, is a 4th century floor mosaic from Hinton St. Mary in Dorset England. The bust of Christ is flanked with pomegranates. The fruit bursting open is a symbol of the fullness of Jesus’ suffering and resurrection.

The trees have been grown in South China and Southeast Asia for centuries and were brought by traders via the Silk Road. In Japan, the pomegranate is a popular bonsai tree because of its flowers and its unusual twisted bark that the older trees can attain. In China, a picture of the ripe fruit with seeds bursting forth is often hung in homes to bestow fertility and numerous offspring. Some said the number of seeds represented the number of generations a family would enjoy.

In Chinese culture, the pomegranate is used in Buddhist religious ceremonies and for daily purposes as well. The seeds were used as a dye for hair and as a medicine. The branch of a pomegranate tree was used to sprinkle water during ceremonies. While the peach is typically used to symbolize longevity, once the pomegranate was introduced in 126 B.C., it was used as a replacement if peaches were not available.

The Chinese use the leaves to relieve itch and the flowers are used to treat burns. A third of a pound of skin mixed with water and simmer until thick is a common recipe for treating eczema. For treating diarrhea, a possible recipe includes using the skin and seeds of one fruit, crushing them together, adding salt, and covering with water, then steaming the mixture until the liquid is thickened and the skin and seeds are soft and mushy. When done, drink this decoction 3x a day.

In Traditional Chinese Medicine, pomegranates are considered a Yin food or tonic as they cool and hydrate the body.

Today, in the West pomegranates are recommended for controlling weight, improving circulation and protecting against cancers. They are used in hormone replacement therapy, oral hygiene and the treatment of immune suppression.

The constituent, punicalagin, which is unique and abundant in pomegranate juice, is known for being effective in reducing the free radicals that can lead to heart-disease. The collective and synergistic force of the ellagitannins (including punicalagin), fatty acids, flavonoids and other compounds found in pomegranate are known to have a far stronger impact than when they are separated and used individually.

Pomegranates were introduced into Spanish America in the late 16th century and California by Spanish settlers in 1769.

Before the introduction of tomatoes (a New World fruit), pomegranate juice, molasses and vinegar were widely used in many Iranian foods and are still found in traditional recipes.

In Greece, pomegranate is used to make a creamy broth of wheat, pomegranates and raisins.

In India and Pakistan, the dried seeds are used for chutneys and curry preparations.

The pomegranate is one of the main fruits in Armenian culture. It is used in wedding ceremonies as a gift to the bride who throws it against a wall, breaking it into pieces ensuring the bride will have future children.

Pomegranate is also made into a liqueur, jam and fruit confectionery used on ice cream.

In Mexico pomegranates are commonly used to adorn the traditional dish “chiles en nogada” representing the red of the Mexican flag in the dish.

Pomegranates contain about the same amount of calories as a single apple. An average pomegranate will contain about 600 juice sacs filled with small edible seeds. The dried seeds are used in trail mix, granola bars and as toppings for salads and ice cream.

The French term for pomegranate, grenade, gives its name to the military “grenade.”

The peel, though edible contains 3x the amount of polyphenols as the fruit or pulp. It is used in dietary supplements and food preservatives.

Kandahar is famous in Afghanistan for its high-quality pomegranates.

How to use Pomegranate (Shi Liu) and take FULL advantage of it's healing powers!