Polygonum is one of the most popular tonic herbs in Traditional Chinese Medicine, in which it has thousands of years of use as a healing and anti-aging herb. Commonly called Fo-ti in North America, the herb is often used to promote hair growth and prevent premature graying. A growing number of studies confirm the herb’s ability to help treat diabetes, liver disease, cancer, atherosclerosis, and neurodegenerative disorders. It is considered the King of Yin Tonics in Oriental Medicine.

Below is an overview of polygonum, combining the best of Western Science, Oriental Medicine, Traditional Chinese Medicine (TCM), Shamanism, Folklore, and a wide range of healing modalities. Gain a balanced and thorough understanding of the healing properties of polygonum.

How to take FULL advantage of Polygonum's healing powers... 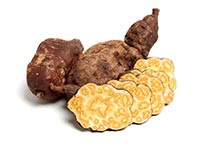 JOIN ME in an exploration of the healing herb, Polygonum / Fo-Ti (He Shou Wu). Explore the benefits and applications of Polygonum, from Eastern and Western perspectives, and so much more!

Pin Yin: He Shou Wu (Translates as “Black-Haired Mr. He”)​

Also Known As: Zhi He Shou Wu (cured preparation), Sheng He Shou Wu (unprepared), Fo-Ti (Translates as “Elixir of Life” or sometimes, “Vine to Pass Through the Night”)

Polygonum is a type of vine in the buckwheat family, Polygonaceae. It has a woody tuber and leaves that are heart-shaped and about 3-7cm long. The plant’s flowers are white, greenish-white, or pink. There are dozens of related species of Polygonum so be sure of your botanical name when choosing your plant. Polygonum multiflorum is a hermaphrodite and is pollinated by insects.

Polygonum is native to China but also grows extensively in Japan, Taiwan, and some parts of North America on hillside forests and rock crevices.

Caution: Generally considered safe, there is concern that improperly prepared polygonum or over-use over a long time may cause liver damage, especially in people with pre-existing liver problems. If fatigue, anorexia, nausea, yellowing of skin and sclera, yellow urine, and other symptoms appear after medication, patients should be alerted to the occurrence of liver damage and promptly stop the medicine and treatment.

History/Folklore: Polygonum is commonly used to treat cancer, heart disease, memory problems, and other ailments associated with aging. The herb is a classic longevity tonic herb known for its ability to rejuvenate the body and improve cognitive function. It is an adaptogenic herb with excellent anti-inflammatory properties. Its antibacterial properties have been found to treat MRSA (methicillin-resistant Staphylococcus aureus) in a cell-based study.

Polygonum is used worldwide to promote longevity and virility. It is one of the most popular herbs in Traditional Chinese Medicine, containing over 100 chemical compounds that, depending on what preparation you are using, allow you to increase or decrease access to particular constituents.

There are four common types of preparation for polygonum: raw, cured, wine, and steamed. The most commonly used preparations are raw and cured. The roots are reddish and popularly boiled with black beans to create a preparation known as red Fo-ti. The roots can be boiled or steamed with black soybeans (Hei Dou) for several hours or up to three days and then dried. Black beans are traditionally attributed with the property of supplementing blood and essence (Jing). The prolonged cooking is associated with enriching the herb’s warming nature. This approach is used to help prevent heart disease by preventing the accumulation of plaque forming on blood vessel walls.

Raw polygonum is used for its laxative properties or applied externally to treat skin conditions such as acne, dermatitis, scrapes, and athlete’s foot. It is useful for countering inflammatory conditions and treating abscessing infections or eruptive diseases such as rubella. Raw polygonum is sometimes mistakenly called “white Fo-ti.” While shou wu (Bai Shou Wu) is an unrelated plant, Cynanchum bungei, it is said to have similar properties to ho shou wu, with similar tastes and applications.

The plant was originally called Jiao Teng, meaning intertwining vine (“jiao” means intertwining, and “teng” means creepers) referring to the plants intertwining vines. However, after a Mr. “He” was unable to father a child at 58 years and was advised by a monk to eat Jiao Teng, which he did, and then fathered more than 7 children and had his hair turn black again after being gray, the herbs name was changed to ho shou wu, or Mr. He’s Black Hair, as his youth and sexual potency were restored by taking Fo-ti tea. Another version of the story tells of his using the herb and then being able to recognize the principles of human life. He is said to have lived to 160 years of age.

It is often cooked in water and black beans to prevent gray hair or baldness. Curing the herb increases the phosphates (especially lecithin) by almost 30%, as well as the sugar content. Curing the herb with black beans also helps to eliminate potential laxative properties identified with uncured polygonum. It can also be traditionally prepared with red jujube to treat insomnia.

The North American name, Fo-ti, was created by a Hawaiian businessperson wishing to take advantage of the herbs’ renowned tonic and healing properties. Fo-ti translates as “Elixir of Life” and the name stuck for Westerners wanting to use the herb. To this day, you will find Fo-ti mentioned on labels for supplements and herbal blends that make use of polygonum as a part of their formulas.

In Traditional Chinese Medicine it is said to unblock the Channels (aka Meridians) allowing Qi to properly flow through the body and insure the release of Pathogenic Factors that can cause fatigue, pain, and weakness. It is considered to be the strongest of any herb for drawing Qi up out of the earth. It remains to this day, a revered Taoist longevity herb that can support health and the wisdom that is identified with living a long and righteous life.

It is recognized as an excellent herb for tonifying and replenishing Jing (Essence), which can be lost through weakening lifestyle choices, stress, overwork, or chronic illness. Polygonum is highly restorative and is often blended with angelica, lycium, ginseng, ginger, and other tonic and blood-tonifying herbs.

It is used to treat menopause symptoms and erectile dysfunction, safeguard the skin from ultraviolet rays, build stamina, and treat vaginal discharge.

Processed (cured) polygonum is noted for being less potentially toxic than ingesting raw polygonum. Preparing the herb helps to reduce the number of chemical compounds found in polygonum that may cause diarrhea.

Generally considered a safe tonic herb, there is only a few reported cases of liver hypersensitivity caused by the herb, and these were associated with having been used in unusually high doses. There is still no conclusive determination about if, how, or under what conditions polygonum may become harmful to the liver.

While the stems can also be used to tonify blood, they are especially used to treat insomnia and diabetes.

The sugars, rhamnose, arabinose, xylose, and glucose that are found in polygonum are known for their immune-enhancing properties. The THSG, which is similar to resveratrol, but stronger, and is one of the herb’s primary active constituents, up-regulates the Klotho gene.

Polygonum is thought to mimic estrogen in the body.

Polygonum extract is used in manufacturing as an ingredient in hair and skin care products.