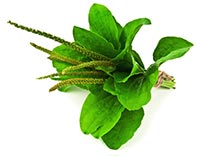 Often considered a weed, plantain is a useful herb for treating indigestion and stomach ulcers. The young leaves are edible and taste a bit like spinach or Swiss chard only bitter. Plantain is an herb that has been popular in Native American cultures, even though it originated from Europe and Asia. Brought to the Americas by early settlers, Native American’s quickly realized the plant’s antibacterial and anti-inflammatory properties made it useful for treating a wide variety of ailments and injuries. Both P. major and P. lanceolata have similar medicinal properties, neither are related to the starchy banana-like food that is also commonly called “plantain!” That is a different plant altogether! The Chinese make use of the seeds.

Plantain is a low-growing perennial plant with oval, ribbed short-stemmed leaves which form basal rosettes that tend to hug the ground sending up leafless flower stalks in the summer and fall. The flower stalks can be up to ten to fourteen inches tall. There are over 200 species in the plantain family.

Plantain is native to Eurasia but is now naturalized all over the world.  It will grow in sun or shade and in almost any soil.

History/Folklore: Plantain is one of the most abundant and widely distributed medicinal crops in the world. It has long been considered a cure-all and treatment for everything from bites to lung conditions, to jaundice, to hemorrhoids. It is found listed in early European herbals dating back to the 1500’s. Modern research confirms its ability to heal abrasions, skin wounds and treat lung conditions such as asthma and bronchitis.

Chewing on the leaves is a traditional method for preventing infections and the irritations caused by bruising, and insect bites (including spiders, wasps and mosquitoes) and snake bites.

Research is being introduced to study the plant’s ability to help protect the stomach and body from the effects of chemotherapy.

A strong infusion of the herb is said to help balance blood sugar levels. The constituent acubin, is recognized as a powerful anti-toxin and the constituent, allantoin is known for promoting wound healing, speeding up cell regeneration and having skin-softening effects.

The young leaves are edible and excellent in salads, soups and sandwiches. The older the leaves get the tougher they become, making them better for use in stews and soups. The immature flower stalks can also be eaten raw or cooked. The seeds have a nice nutty flavor. The leaves, seeds and roots can all be made into herbal teas. The roots have been used to treat wounds, fever and respiratory infections.

Plantain is often considered a weed. It has an uncanny ability for growing in urban settings and in areas needing reclaiming by nature such as roadsides and vacant lots. It is in fact an important plant for soil rehabilitation as it breaks up hard soil surfaces while simultaneously holding the soil in place preventing erosion.

The Saxons considered plantain one of their nine sacred herbs.  Early Christians used the plant as a symbol of the down-trodden as it was a common plant found along roadsides and paths. It thus became known as “way bread” and a symbol for the “well-trodden path” of those who seek the path to Christ.

Plantain was so commonly used in early Europe as a medicine and cure-all that it is even mentioned in the literary works of Chaucer and Shakespeare.

Plantain was brought to North America and New Zealand by European settlers who used it as a food and medicine. Because they brought it with them wherever they went and it tended to thrive in the disturbed soils around European settlements it earned the common name, “White Man’s Foot” by the Native Americans.

Common recommended dosage for tea is ¼ to ½ teaspoons of the leaf steeped in one cup of boiling water. This dosage can be safely used daily. Fresh leaves can be applied directly to abrasions, dermatitis, baby rash and insect bites. Syrups or tinctures can be taken in ½ teaspoon doses 3x daily.

Plantain makes a wonderful herbally infused oil. Simply fill a container with fresh crushed leaves and cover them completely in oil and cover. Let the oil sit in the sun for 2-3 weeks and enjoy as it turns a lovely dark green color. Strain and use the oil to treat a large number of skin conditions or use in salves.

The high nutritional and mineral content of the leaves make it an excellent tea for replenishing the lost nutrients due to diarrhea or dysentery.

The Chinese use the seeds. When adding to a decoction they will use 4-9g in a gauze or cheesecloth that is then placed into the decoction for steeping. This prevents the seeds from sticking all over the pan and making it difficult to strain the herbs from the decoction. When the seeds are fried in salt it will increase their tonifying effects on the Liver and Kidneys. The seeds are collected in the summer and fall when they are ripe. They are oval, or triangular-shaped oblong, flat and very small. Their color is yellowish brown to dark brown with fine wrinkles. They are known to have a significant diuretic effect and inhibit a variety of bacteria and Staphylococcus. An extract made from these seeds is also useful for preventing the formation of kidney stones.

Plantain is a wild food source for butterflies and birds.

Plantain seeds can be ground into a fine powder and used to make nutritious breads or even pancakes.

The tannins found in plantain help to draw bruised tissues together for proper healing and to help stop bleeding.

Plantain is a high source of fiber making it useful as a gentle natural laxative.