The processed root of pinellia is one of the most important and frequently used herbs in Traditional Chinese Medicine (TCM) to help Transform Phlegm and stop coughing. In China, pinellia is the primary herb for treating phlegm-damp syndromes including nausea, vomiting, insomnia and bloating. For all its abilities, it is a wonderfully gentle herb, able to treat both young and old.

Watch a short video, from Ann Christensen, Founder and Creator of White Rabbit Institute of Healing™ – A Little Known Secret about Pinellia…

Below is an overview of pinellia, combining the best of Western Science, Oriental Medicine, Traditional Chinese Medicine (TCM), Shamanism, Folklore, and a wide range of healing modalities. Gain a balanced and thorough understanding of the healing properties of pinellia.

How to take FULL advantage of Pinellia's healing powers... 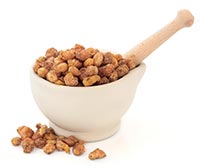 JOIN ME in an exploration of the healing herb, Pinellia (Ban Xia). Dive deep into the benefits and applications of Pinellia, from Eastern and Western perspectives, and so much more!

Pinellia is a genus of plants in the family Araceae. The plant’s inflorescence, which possesses a green, hooded spathe from which extends a long, tongue-like extension of the spadix. The leaves vary greatly in shape among the many various species from simple to cordate to compound with three to many leaflets.

Pinellia is native to East Asia, especially China, Korea and Japan. Pinellia ternata is the species that can now be found in Eastern North America as well. Pinellia likes hillsides, damp grass by streams or wooded areas.

Caution: Processed pinellia is considered safe and has few side effects. Because the herb is warming and drying it is not recommended for treating what the Chinese call Yin Deficient conditions. It is never used in cases of bleeding or depleted Body Fluids. The raw (unprocessed) root is toxic and is only used externally.

History/Folklore: In China, pinellia, is commonly called “Green Dragon” due to the color and shape of the inflorescence, which possess a green, hooded spathe from which extends a long, tongue-like extension of the spadix, giving the plant a dragon-like appearance. The name also derives from the plant blossoming in the lunar month of May, when the plants are green and blooming. Similar to dragons, pinellia is known for its ability to Lift the Spirits and Calm Qi (Energy) in the Body.

The plant blossoms in May, after which the tubers are excavated from the ground for medicinal use. The dried tuber is spherical in shape with a white or light yellow surface. The best quality is bigger, clean white, solid and with a consistency that is described as “fine mealiness.”

The raw roots are soaked for seven days in water and then in ginger juice or boiled in ginger tea that contains a quantity of alum in order to remove any toxicities. The initial herbal material is opaque white and once processed becomes a translucent yellowish In color.

Processed pinellia is considered safe and has been shown in both Western and Traditional Chinese Medicine research to have few side effects. Unprocessed, or raw, pinellia root is toxic and is only used externally. Typical external dosing is 4.5-12g of the raw herb, which is ONLY used externally to treat ulcerations and skin sores. The root will be dried, powdered and then blended with egg white (or ginger juice) for application.

Tests have shown tincture of pinellia is useful in treating acute toothaches.

The roots that have been deep fried with ginger and vinegar, or processed with licorice and lime (calcium carbonate) in order to remove toxicity are called “Fa Ban Xia,” and are the form most typically provided at pharmacies when “Ban Xia” is asked for. When the herb is treated with just ginger juice it is called “Ginger Pinellia” or “Jiang Ban Xia.”

Because pinellia contains ephedrine alkaloids, which might cause strokes or seizures when used improperly, the single and raw herb has been banned in the U.S. It has not been banned for use in Traditional Chinese Medicine formulas or products that are commercially available where the herb has been properly processed to reduce toxicity becoming safe to use as directed. Pinellia seeds are poisonous so do not ingest.

Slices of the herb can be used as a base for Traditional Chinese Medicine moxibustion treatments.

The raw root is toxic and is soaked in water or processed in other ways to remove the oxalates and other irritants found in the plant’s roots.

Due to the toxicity of the raw root it is only used externally in Traditional Chinese Medicine.

How to use Pinellia (Ban Xia) and take FULL advantage of it's healing powers!