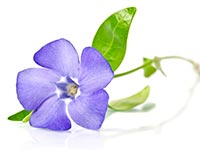 Both species of periwinkle (Vinca major, V. minor) and Madagascar periwinkle (Catharanthus roseus) are used for their astringent and tonic properties. Often associated with supporting “brain-health,” the plant is used to support memory and brain function in the elderly. It is also used to stop bleeding, and clear mucous from the throat and lungs. A beautiful flower, periwinkle has been associated with death, used as a medicine and as a magical ingredient in love potions and other spells.

The various species of periwinkle are perennials. Their shiny oval leaves are always found in pairs on the stem, with the flowers sprouting from their axils. The pretty purple flowers have five blunted, triangular petals that resemble the blades of a fan.

Periwinkle originated in Madagascar but is now found growing wild in warm climates all around the world.

Caution: Use of the whole herb is considered safe, however using the isolated constituent, vincamine alone can interact dangerously with some blood thinning medicines, so check with your healthcare provider.

History/Folklore: The periwinkle flower is the source of the lavender blue color “periwinkle” named after the plant. It has been used in the traditional medicines of many cultures including, Europe, China, India and Caribbean Islands.

The Latin name, “vinca” derives from the latin verb “vincare” meaning to bind or subdue, a reference to the plants invasive creeping stems.

The constituent vincamine, can be converted in the laboratory to a compound vinpocetine which is being studied as a possible dietary supplement to aid memory in the elderly. Studies have shown that the plant acts on white blood cells to inhibit cancer. Herbalists prefer using the whole herb for the balanced blend of healing chemicals found within the plant.

The Chinese have used the Madagascar periwinkle (Catharanthus roseus) as a medicine to especially treat diabetes, where it is effectively used as a substitute for insulin.

The flower is a symbol of spiritual peace and harmony.  Placing the leaves in the mattress of a couple is said to bring them peace faithfulness and love forever. The 17th century English herbalist, Culpeper said, “The leaves eaten together by man and wife cause love between them.”

An old traditional folk name from France and England was “Sorcerer’s Violet.” It was considered a favorite flower of the “wise folk,” sometimes called witches, for making charms and love potions, and was said to be able to exorcise evil spirits. The Italians called it “Flower of Death” from the ancient custom of placing garlands of the flowers on the funeral biers of dead children. The Ancient Romans used periwinkle to symbolize sacrifice and death and in Medieval England it was associated with executions.

Madagascar periwinkle (Catharanthus roseus) is an endangered species and not the same plant as periwinkle (Vinca rosea), though they have some overlapping and similar medicinal uses.

Periwinkle is used in homeopathy to treat hemorrhages.

A few crushed leaves applied to the nostrils will stop a nosebleed.