A beautiful garden favorite, this flower is also a wonderful medicinal herb. It is especially known for treating female conditions associated with menstruation or menopause. It has a long history in Traditional Oriental Medicine for helping to nourish Liver Blood and Calm Yang.

Below is an overview of red jujube, combining the best of Western Science, Oriental Medicine, Traditional Chinese Medicine (TCM), Shamanism, Folklore, and a wide range of healing modalities. Gain a balanced and thorough understanding of the healing properties of red jujube.

How to take FULL advantage of Peony's healing powers! 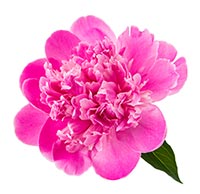 Peony is in the Ranunculaceae family. There are any from 25-40 different peony species, and many hundreds of cultivars. Most are herbaceous perennial plants, with some resembling trees. The flowering plants grow to be about 20-28 inches tall with glabrous branched stems.

They are native to Asia, southern Europe, and western America. Peonies like deep, rich, well-drained soil in full sun or partial shade.

History/Folklore: In the Chinese tradition, it is said that women who use peony root teas on a regular basis will become as radiant and beautiful as the flower itself. It is said to make skin elastic and silky. White peony is one of the oldest remedies in Traditional Chinese Medicine. It is always used in tandem with other herbs to support their function or as a counterbalance to their possible too strong actions.

In Traditional Chinese Medicine (TCM), white peony is highly regarded for its emotional stabilizing benefits and ability to improve mental focus. In TCM, the Liver is associated with the Hun, your ethereal soul, that part of your being and psyche that is intuitive, psychic, and wanders at night in your dreams to bring back inspiration. By nourishing Liver Blood, white peony helps strengthen this important aspect of Liver function helping to calm, strengthen, and improve mental and emotional clarity.

Whtie peony is most often used as a blood tonic useful for treating stagnant Liver Qi, with symptoms that include, muscle spasms, irregular periods, abdominal pain. It is also used to treat infertility associated with PCOS, ovarian failure, and endometriosis. It is commonly paired with Licorice to promote fertility.

White peony also has a unique ability to both nourish Liver Blood and subdue Liver Yang, making it the best remedy for headaches caused by Liver Blood deficiency and Liver Yang Rising. As a comparison, lavender can also direct Liver Qi (Yang) Downwards, but it does not also Nourish the Blood in the way that white peony does.

White peony is understood in Traditional Chinese Medicine to Pacify the Liver. This means it helps calm and cool the Liver, allowing the Liver to effectively fulfill its function of regulating the flow of Qi, and therefore also blood, throughout the body.

White peony helps nourish Liver Qi and Blood so there is enough of each to properly move through the body and for neither to become stagnant due to deficiency. The herb is often combined with bupleurum (Chai Hu) for this reason. Bupleurum has powerful draining and moving properties that can deplete blood over time. By adding white peony, blood is nourished and replenished allowing bupleurum to do a better job of getting things moving again, without causing depletion.

White peony roots are the peeled root and are white to pink in color, red peony root (Chi Shao) is from the same root but is unpeeled, retaining the outer layer and is red. White peony root is used most often. Both varieties have similar properties as well as slightly different strengths. White peony is considered to be more of a tonic to blood and Yin; the red variety is considered a better hemostatic and better at promoting circulation.

The name, peony, derives from the Greek name, Paeon, the physician of the gods, reputed to have discovered the medicinal properties of plants in this genus.

In China, peony petals are parboiled and sweetened for use as a tea-time delicacy, in summer salads, jams, or as a garnish in drinks. In the west, peony petals can be dried and used in potpourri or to scent baths with.

White peony tea is made from the leaves of Paeonia suffruticosa (Bai Mu Tan), a member of the peony family but a different plant from the flowers (Paeoniae lactiflorae). White peony tea is a popular type of white tea that can also boost the immune system and support heart health. The bark of this peony tree is also used as a medicine.

Not to be confused with peony tree (Cortex Moutan/Paeonia suffruticosa/Mu Dan Pi), peony flowers (Paeoniae lactiflorae), come in two commonly used varieties, white and red. White peony is considered to be more of a tonic to blood and Yin energy; the red variety is considered a better hemostatic and better at promoting circulation.

Over 262 compounds have been obtained so far from the Paeoniaceae plant family.

Cultivated in China since 900BC, peonies are one of the oldest remedies in Traditional Chinese Medicine.

How to use Peony to take FULL advantage of it's healing powers!