Pennyroyal (Bo He You)

Pennyroyal is a well-known emmenagogue causing the uterine muscles to contract. It is considered a midwife’s herb that is typically combined with other herbs to help stimulate a delayed or irregular menses and help expel a dead fetus. In proper doses, pennyroyal tea and leaf extracts have been used without serious side effects. Pennyroyal oil, however, is highly toxic causing seizures, coma, cardiopulmonary collapse, acute liver and kidney disease, and multiorgan failure. The tea has also been used traditionally to treat pneumonia, shortness of breath, stomach pains, liver and gallbladder problems. It is used in soaps and perfumes for its minty fragrance. It is commonly used as an insecticide to kill mosquitoes and fleas.

Watch a short video, from Ann Christensen, Founder and Creator of White Rabbit Institute of Healing™ – Can Pennyroyal Be Used Safely?

Below is an overview of pennyroyal, combining the best of Western Science, Oriental Medicine, Traditional Chinese Medicine (TCM), Shamanism, Folklore, and a wide range of healing modalities. Gain a balanced and thorough understanding of the healing properties of pennyroyal.

How to take FULL advantage of Pennyroyal's healing powers... 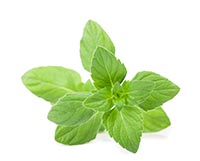 JOIN ME in an exploration of the healing herb, Pennyroyal (Bo He You). Explore the benefits and applications of Pennyroyal, from Eastern and Western perspectives, and so much more!

Meridians: Heart, Kidney (with a focus on the Uterus)

Pennyroyal is the smallest and most pungent member of the mint family. It is a perennial, creeping herb with small, blue, lilac-like flowers at the stem ends that grow in whorls from the leaf axils. Its leaves are grayish-green, and like other mint plants, it is highly aromatic.

Pennyroyal is indigenous to Europe and western Asia. It now grows in woods through the northern and eastern US and Canada, and northern parts of Europe. It likes moist soils on the borders of ponds and streams.

Caution: Contains pulegone, a highly toxic substance that can cause kidney and liver damage, leading to nausea, vomiting, seizures, multiple organ failure, and death. Not recommended for pregnant women as it can stimulate uterine contractions. Pennyroyal tea and leaf extracts have been used in proper and recommended doses without serious side effects. Anyone with kidney or liver disorders should avoid pennyroyal. Used externally, pennyroyal is considered safe.

History/Folklore: Pennyroyal is a midwives herb. It is a powerful emmenagogue used to stimulate delayed or irregular menses. It has been used to help expel a dead fetus. Women with cystic ovary syndrome may choose to make use of pennyroyal. It is thought to be especially useful for treating stuck menses associated with sudden chill or cold. Never use pennyroyal oil internally as it is a highly toxic form of the herb that can cause seizures, coma, cardiopulmonary collapse, acute liver and kidney disease, and multiorgan failure. Pennyroyal tea and leaf extracts, used in proper and recommended doses, have been used without serious side effects. High doses are toxic and possibly fatal.

While most mint plants are identified as having cooling properties, pennyroyal has been used to warm the uterus and stomach, helping to relieve spasms, hysteria, and an upset stomach.

Native Americans used the herb to treat a wide variety of ailments including colds, coughs, toothaches, stomach disorders, and as a repellent for killing mosquitoes and fleas.

Pennyroyal has been recorded in history as far back as the Roman naturalist Pliny and Greek physician Dioscorides. The ancient Greeks and Romans used pennyroyal as a culinary herb. Pliny the Elder noted the herb’s ability to stimulate menses and expel a dead fetus. He also recommended hanging the plant from the ceilings in sleeping rooms to protect, support health, and aid sleep. The herb was considered more conducive to health than roses.

An Ancient Eygptian medical text, attributed to Cleopatra, but actually written by the female Greek physician, Metraodora, recommended pennyroyal with wine to induce abortions, a practice no longer used due to the toxicity of the herb and the seriously harmful side effects associated with improper use of this herb.

The 17th-century herbalist Nicholas Culpeper mentioned the herb as being useful for treating female complaints, venomous bites, and indigestion. He also noted that “…the green herb bruised and put into vinegar, cleanses foul ulcers and takes away the marks of bruises and blows about the eyes, and leprosy, if drank and applied outwardly.”

In Europe, Nicholas Culpeper is credited for perhaps being the source of pennyroyal being thought of as an herb to use for early-stage abortions because he referenced it as being useful for “expelling dead fetus stuck in a woman.” This information also dates back to Pliny the Elder who first mentions this application of the herb. It is to be noted that this is not an invitation or recommendation to use this herb as an abortifacient. In fact, improperly used this highly toxic herb can cause coma and death.

The essential oil used internally, is highly toxic, even in very small doses, causing seizures, coma, cardiopulmonary collapse, acute liver and kidney disease, and multiorgan failure. This is a serious and powerful herb, with many attributes, don’t be foolish and misuse it. The American College of Clinical Pharmacy has supported this view, asserting that there is no documented case of pennyroyal causing an abortion when the herb is used properly, however it can cause significant incurable health problems, when used improperly. Herbal abortion is unregulated, under-researched, and often has unpredictable and dangerously serious consequences. Be careful and see your healthcare provider.

Traditionally, pennyroyal was noted for its ability to purify water and blood. The herbalist Gerard is quoted as saying, “If you have Pennyroyal in great quantity dry and cast it into corrupt water, it helpeth it much, neither will it hurt them that drink thereof.” It was respected for its ability to “cleanse the lungs and chest from all gross and thick humours.” Renaissance sailors purified their drinking water with it, and its scent mixed with wormwood was a cure for seasickness.

Pennyroyal may relieve headaches, bring down a fever, and quiet coughs. It has been used to treat bronchitis and sinusitis.

Pennyroyal oil has been used for killing fleas and treating skin disorders. It is often used as an ingredient in your pet’s flea collar.

A large number of recipes from ancient Rome have been found using pennyroyal, along with oregano and coriander. It was also popular for cooking in the Middle Ages, used for stuffing pork with honey and pepper. Its flavor, while more pungent than other mints, makes it popular as a food and beverage flavoring agent. It is no longer used for cooking today. The common name, Pudding Grass, comes from the herb being used to make stuffing for hog’s puddings.

Repeated use of pennyroyal alcohol-based extract for two weeks has been linked to a death. The concentrated essential oil is not recommended for internal use as it is extremely toxic and can cause severe kidney and liver damage, and even death. Pennyroyal oil contains 80-90% pulegone, giving the plant its peppermint flavor, but also concentrating its toxic effects. Neither the fresh nor dried leaves are recommended for use by pregnant women, even though they do not contain these high levels of the toxic compound pulegone. There is no known antidote for pennyroyal toxicity.

France and Germany use the oil of pennyroyal commercially.

Want Pennyroyal (Bo He You)?

Pennyroyal oil contains pulegone that in concentrated or high doses becomes highly toxic. The essential oil should never be taken internally in any amount, and the leaves in teas and extracts, taken in proper and recommended doses, have been used without serious side effects.

Pennyroyal is the smallest and most pungent member of the mint family of plants. Its taste and odor are stronger than other mints.

Take FULL advantage of Pennyroyal (Bo He You)!