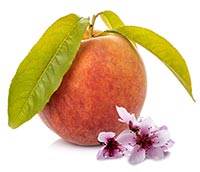 Peach fruit is enjoyed in the West, but in China, the pits are also used as an important medicine for treating conditions caused by blood stagnation. In China, peaches are associated with longevity and vitality. In the West the fruit is known for its heart healthy and antioxidant properties.

Below is an overview of Peach (Tao Zi), combining and interpreting the best of Western Science, Traditional Chinese Medicine (TCM), Shamanism, Folklore and more. Gain a balanced and thorough understanding of the healing properties of Peach (Tao Zi).

The peach is a deciduous tree with lanceolate leaves that are 7-13 cm long and 2-3 cm wide and pinnately veined. The pink flowers bloom in early spring before the leaves and are solitary or paired with five petals. The fruit has yellow or whitish flesh with a velvety (peaches) or smooth (nectarines) skin in different cultivars. The single, large seed is red-brown, oval shaped and surrounded by a wood-like husk. The peach fruit is botanically known as a drupe.

Peach trees are native to Northwest China where it was first domesticated and cultivated. Peaches like dry, continental or temperate climates. The trees have a chilling requirement that prevents them from being cultivated in tropical climates. They like full sun, nitrogen-rich soil and are planted in the early winter.

History/Folklore: The name, “persica,” refers to the peach trees widespread cultivation in Persia (present day Iran) before it was transplanted to Europe. The genus Prunus, includes cherry, apricots, almond and plum trees.  They are all in the rose family of plants.

China is the world’s largest producer of peaches. Fossil records indicate that peaches date back to 2.6 million years ago. Recent evidence indicates that peaches were cultivated in China as early as 6000 B.C. They have been mentioned in writings dating back to the 11th century B.C. as favorite foods of kings and emperors.

Peach cultivation reached Ancient Greece by 300 B.C. and they were well known by the Romans in the first century AD and were found painted on the walls of Ancient Roman homes. The peach was brought to the Americas by the Spanish explorers of the 16th century, eventually making its way to England and France by the 17th century. Although Thomas Jefferson had peach trees at Monticello, general commercial farming of the trees did not start in the United States until the 19th century.

100 grams of peaches is only 39 calories. They are loaded with antioxidants that help fight free-radicals, prevent cancer and protect your heart from disease. Like many fruits and vegetables, the highest levels of nutritional value are found in the skin.

The caffeic acid found in peaches helps inhibit a type of fibrocarcinoma, a tumor that grows in fibrous connective tissue. Certain colon cancers are also stunted by peach consumption.

Peach fruit is enjoyed in the West, but in China, the pits are also used as an important medicine for treating conditions caused by blood stagnation. Compounds in peach pits reduce the growth of papilloma (tumors) on the skin and slow the growth of cancers in the body. Typical dosing is 4.5- 9 g.  It is recommended the pits not be broken into smaller pieces until being dispensed.

Peaches are being studied for their heart health benefits and ability to counter metabolic syndrome. The combination of bioactive compounds found in peaches create a notable improvement in individuals at risk for heart disease, weight gain and diabetes.

Peach flower extract can protect your skin from harmful UV damage that can cause skin cancers.

Most peach trees sold by nurseries are cultivars that have been budded or grafted onto suitable rootstock to improve the quality of the fruit.

Peach blossoms are highly valued in China. The peach is said to possess more vitality than any other tree because the flowers bloom before the leaves sprout. Branches of peach blossoms were carried before ancient rulers to protect them from evil spirits and energies. Peachwood was used for carving the earliest known door gods during the Han dynasty. Peachwood bows were used to shoot arrows in every direction to dispel evil. Slips of the wood and carved peach pits were used as amulets to protect a person’s life, safety and health. Peachwood wands were used in exorcisms to ward off evil.

The “Old man of the South Pole” is a deity of Chinese folk religion and is depicted holding a large peach, representing life and health.

Artists of the Renaissance were claimed to use the image of a peach to represent a heart, if the peach included a leaf, this was a symbol for the tongue, implying speaking the truth from one’s heart.

Peaches and nectarines are the same species, even though they are regarded as commercially different fruits. The only difference being peaches contain fuzz on their skin and nectarines do not.

Allergy to peaches is a relatively common sensitivity to proteins found in peaches and almonds too.