Passion flower (also written passionflower) is used today as a dietary supplement to aid sleep and reduce anxiety. It helps to reduce pain, ease spasms, and calm restlessness. It is used to treat menstrual cramps, attention-deficit/hyperactivity disorder, and externally to soothe burns and hemorrhoids.

Below is an overview of passion flower, combining the best of Western Science, Oriental Medicine, Traditional Chinese Medicine (TCM), Shamanism, Folklore, and a wide range of healing modalities. Gain a balanced and thorough understanding of the healing properties of passion flower.

How to take FULL advantage of Passion Flower's healing powers... 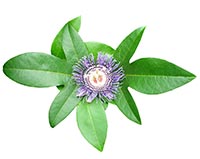 JOIN ME in an exploration of the healing herb, Passion Flower (Ji Qing Hua). Explore the benefits and applications of Passion Flower, from Eastern and Western perspectives, and so much more!

Passion flower is a perennial climbing vine with large showy flowers with a fringe-like crown and a conspicuous stalk bearing stamens and pistil. There are about 500 to 550 known species of the passion flower. It is a member of the Passiflora genus of plants. It can grow as tall as 30 feet and has bluish-white and purple petals. It produces egg-sized fruit referred to as maypop.

Passion flower is native to the southeastern U.S. and Central and South America.

Caution: Passion flower is generally considered safe when used in food-flavoring amounts and for most people when taken as a tea used nightly for weeks at a time or as a medicine for up to 8 weeks. It is unclear how safe it is when taken internally in large amounts. Its side effects can include nausea, dizziness, and drowsiness.

History/Folklore: Passion flower is most associated with treating insomnia and anxiety. Studies suggest that it appears to boost the level of GABA (gamma-aminobutyric acid) in the brain. This compound is known for its ability to slow or lower brain activity that may help induce sleep and reduce anxiety. It is gentle enough to calm children or the elderly. The German Commission E has approved the use of passion flower to treat nervous restlessness and exhaustion.

Native Americans have used passion flower as a sedative as well as to treat a variety of ailments including wounds, earache, and liver problems. Seeds that were thousands of years old were found in the state of Virginia where the North American Algonkian Indians lived. Early European settlers noted them eating the fruit. Other American Indian tribes used the plant’s roots as a poultice to help heal wounds or as a blood tonic. The Cherokee traditionally boiled and fried the young shoots, mixing them with other edible greens.

A study reported in the Journal of Anesthesia and Analgesia examined the plant’s effect on patients preparing for surgery and found that people who consumed the herb before surgery reported less anxiety than those who received a placebo.

Research indicates that the effectiveness of clonidine in treating high blood pressure and anxiety disorders is improved when it is combined with passion flower. The study also indicated that the combination worked better for reducing the symptoms of opiate drug withdrawal, including anxiety, insomnia, irritability, and agitation.

The species P. serratodigitata is being studied for its potential to treat stomach ulcers.

P. incarnata combines nicely with other herbs, such as valerian and lemon balm, that can help reinforce the plant’s calming and sedating properties.

For treating generalized anxiety disorder (GAD), 45 drops of extract taken daily can be effective for helping to reduce symptoms.

Energetically, passion flower is a downward moving and cooling herb. From the perspective of Traditional Chinese Medicine, it is a Yang draining or anchoring herb, helping to pull upward rising Yang out of the head as well as relieving excess Fire and Heat symptoms associated with Liver Yang Rising or Liver Yang Flaring.

The plant’s anxiety-reducing properties include helping conditions aggravated by anxiety such as asthma, hypertension, or nervous upset stomachs. Some research indicates that the extract of passion flower is comparable to the widely prescribed pharmaceutical anti-anxiety agent, oxazepam, which is used to treat the symptoms of generalized anxiety disorder (GAD) in some patients.

Spanish explorers learned of passion flower from native Peruvians. Its name derives from a reference to the Christian tradition known as the Passion, by which the final period in Jesus Christ’s life, including his crucifixion, became known. Spanish priests who were first introduced to the plant saw the flower as a physical representation of the crucifixion of Christ. Its three stigmas symbolized the nails of the crucifixion, the coronal filaments the crown of thorns, the five stamens the wounds, and the ten sepals the ten disciples (with Judas and Peter being left out due to their turning against Jesus in his final hours). In this way, it became an important teaching aid for telling the story of Christ to the indigenous peoples.

Passion flower was formerly approved as an over-the-counter sedative in the U.S. This approval was later withdrawn, however, as it was deemed that insufficient studies had been completed for approval to be properly given.

Passion flower has been used in charms and potions to attract friendship and bring peace. The leaves are placed in homes to reduce discord and bring harmony.

Certain species such as P. edulis and P. caerulea are grown for their edible fruit. The fruit is also used as a flavoring for certain beverages.

Passion flower tea, taken an hour before bedtime, is commonly used to improve sleep quality. A typical dose is 0.25 to 2 g of dried herb steeped in a cup of boiling water for 10 to 15 minutes. Let cool, strain, and enjoy. Nitey nite!

There are considered to be anywhere from 500 to 700 different species in the Passifloraceae family, and up to 60 of them are used for food.

If using passion flower daily, take a break from the herb every 10 to 12 days to help prevent a build-up of possible toxicity.