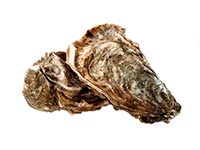 Oyster shells are often mistakenly suggested or thought of as a supplemental source for calcium. While the shells are excellent for treating anxiety, insomnia, migraines, strokes, and palpitations among other conditions, they are not recommended for calcium supplementation as the body does not easily absorb calcium in this form. Oysters themselves are an excellent source of calcium and good for detoxing the liver, nourishing the skin and improving a person’s sex drive. The crushed shells have long been used as a medicine in Traditional Chinese Medicine to treat a wide variety of disorders from anxiety to vaginal discharge and nocturnal emissions. In many cultures the shells are identified and used in funeral rites and burial locations.

The outer surface of oyster shells range from grayish-white to yellowish-purple in color. The shell is uneven with concentric scales emanating from the back of the shell. The inner surface is white and smooth, sometimes with purple edges.

These species (Ostrea gigas Thunberg, O. talienwhanesis Crosse, O. rivularis Gould, or O. edulis) of oysters are all found along the coast of China.

Caution: Long-term use or overdose can cause constipation. Avoid if allergic to shellfish.

History/Folklore: Oyster Shells have a long history of use in Traditional Chinese Medicine for treating Liver Yang Rising, soothing nerves, aiding sleep and relieving vaginal discharges. It is often combined with dragon bone and white peony to help calm and soothe anxiety and aid sleep. They have not typically been used in Western herbology as a medicine but rather as an ingredient in love potions and other magical decoctions.

In Traditional Chinese Medicine, oyster shell is described as having no smell and is considered slightly salty, cool and astringing. The shells are washed, dried, crushed and used raw or calcined.

Research in China indicates that processed oyster shells dissolved in water can reduce the incidence of gastric ulcers. In animal studies they have proven effective at reducing certain types of tumors.

In China, many people prefer to use oyster shell in conjunction with other herbs as a sleep aid as it works slowly and steadily without the negative side effects of typical pharmaceutical drugs.

Typical dosage of oyster shell is 15-30g taken in water or as part of decoction. This dosage can increase or decrease depending on the person and condition being treated.

Oysters have been cultivated in Japan and China from at least 2,000 BC.

In the ancient Chinese art of Feng Shui (used to empower and heal environments) shells represent the earth element and are used to attract blessings from heaven. Spiny shells provide more protective energies and smooth shells support more comforting and family energies. Sea shells in general are an emblem for longevity.

In Chinese mythology, the shaping shifting sea dragon, called “shen or chen” which translates as “a large shellfish” was associated with oysters and shellfish. The dragon was famous for creating mirages, shape-shifting into men, animals or objects and was associated with funerals. In the second-century Han dictionary this dragon or sea monster was defined as a large “ge” meaning “clam, oyster,shellfish or bivalve.” The bivalves were used as sacrifices to earth spirits and their shells were use to make hoes for use in the garden. The ground white clay made from the shells was used as a mortar for mausoleum walls.

In Ancient Greece, Aphrodite the goddess of love, was associated with sea shells. This led to their use in magical spells and potions to attract love and romance evolving in the 4th century as a symbol for rebirth with shell imagery being used to adorn Early Christian sarcophagi. This association with Aphrodite also led to sea shells being associated with sex and fertility.

Sea shells also hold a particular sacredness in Mayan symbolism. Oyster shells were often used to depict the human ear. Oyster shells are often referred to in Mayan manuscripts as a reference to the “harvest of the sea”.

Recycling oyster shells to their ocean beds is an important part of sustaining the ecology of their waters and the development of new young oysters. Living oysters help filter out many of the pollutants found in our ocean’s waters and contribute greatly to its healthy ecology. A group of oysters is called a “bed” of oysters or an “oyster reef.”

Not for Building Bones

Baby oysters need the shells of their ancestors to thrive. Returning oyster shells to their ocean beds is an important ecological step for sustaining these critical populations.