Osmanthus, also known as sweet olive, is one of the ten most known flowers in China. A beloved tea with a lovely scent and flavor it can also be used medicinally to promote healthy skin, lower blood pressure, counter stress, and reduce inflammation. The flower is full of antioxidants that promote health and support lung, kidney, and liver function.

Below is an overview of osmanthus, combining and interpreting the best of Western Science, Oriental Medicine, Traditional Chinese Medicine (TCM), Shamanism, Folklore, and a wide range of healing modalities. Gain a balanced and thorough understanding of the healing properties of osmanthus.

How to use Osmanthus and take FULL advantage of it's healing powers! 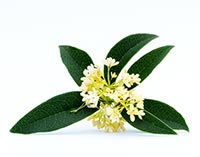 Osmanthus is an evergreen shrub or small tree. The trees can grow to be 35 feet tall and produce edible fruit. The foliage can resemble holly leaves and hide bisexual flowers. The small flowers are white, pale yellow, yellow, or orange-yellow. They have a four-lobed corolla and grow in clusters.

Osmanthus is native to Asia from the Himalayas through southern China, Taiwan, Southern Japan, and Cambodia and Thailand. There are about 15 species that are native to eastern North America, Mexico, and Hawaii.

History/Folklore: A well known herb in Oriental medicine, osmanthus is used to improve the skin, detox the body, support lung health, and reduce thick saliva in the throat. It is often used when a person is suffering from a dry, hoarse throat. It is China’s national flower and popularly used by seniors to aid a weak digestive function. It helps to remove excess nitric oxide from the body, reducing the risk of cancer and diabetes.

The leaves are used to perfume tea and the tree’s fruit are edible. It is the flowers that are most frequently used medicinally.

Osmanthus is one of the ten most known flowers in China. It was considered so precious in ancient times that it was only used to make perfumes of the Emperor. The flowers are harvested in the autumn around the moon festival season.

Osmanthus gets its name from the Greek words osma, meaning “fragrant”, and anthos, meaning “flower”.

Osmanthus was introduced to Europe in the middle of the 19th century by the French botanist Jean Marie Delavay.

Osmanthus is rich in polyphenols that help reduce the risk of coronary artery disease.

In Oriental medicine the leaves are used to treat irregular menstruation.

Osmanthus are a rich source of vitamin B3 that helps the body convert carbohydrates into energy. According to the University of Maryland Medical Center, unlike niacin (a form of vitamin B3) another form of B3 known as niacinamide, is an active ingredient in osmanthus and is being studied for its ability to help protect insulin-producing cells in people with type-1 diabetes.

Osmanthus is often made into a syrup or jam and used in desserts in China. The jam can be called “Cassia Blossom Jam” even though osmanthus is not in the Cassia clan of plants. They are also used in China to make cakes, dumplings, soups, and a liquor.

Osmanthus extract can be used medicinally or as a natural flavoring for ice cream, sorbet, or beverages. The extract is sugar and gluten-free.

There is an ancient Chinese legend that tells the story of ten suns rising from the earth that scorched the lands turning the earth into a wasteland. An archer, known for his strength and skill, shot nine of the suns out of the sky, saving mankind from doom.

The Queen of the Sky, rewarded the archer with peaches, from her longevity garden. However, if the archer ate the peaches he would become immortal, but have to leave his wife. Wanting to stay with his wife, he chose not to eat the peaches.

A bad student of the archer heard about the peaches and decided to try and steal them for himself. To prevent his taking the peaches, the archer’s wife ate the peaches and became immortal and flew to the moon. Upon learning of his wife’s fate, the archer mourned her and set up a table with her favorite tea and foods to honor her. The Queen of the Sky took pity on them, and allowed them to meet every year on the same day under the osmanthus tree. This day became known as the Mid-Autumn Festival and continues to be celebrated in China to this day. Osmanthus wine is the traditional choice for the “reunion wine” drunk with one’s family on this day.

It is also said that osmanthus trees are mythological and grow on the moon. Hence, the color of the moon is often painted as the soft yellow color of osmanthus blossoms. In some versions of this myth, the self-healing tree is said to require being cut back by Wu Gang, every 1000 years or its luxuriant growth will overshadow the moon (which explains the waxing and waning of the moon). This continual chopping was a punishment for murdering his wife for having an affair. After each chop, the tree would repair itself and he would be forced to cut it forever.

The phrase “breaking the osmanthus twig and mounting the dragon” is an old euphemism for having sex.

Osmanthus has a low pollen count reducing the chances of causing allergies.

Osmanthus flowers are very concentrated in flavor. A small amount makes a wonderful tea and the flowers are often used with bitter black or green teas to enhance their flavor.

In Northern India, the flowers of osmanthus are used to protect clothes from insects.

How to use Osmanthus to take FULL advantage of it's healing powers!