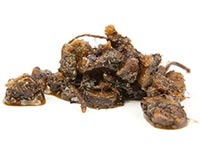 Osha is a seriously threatened plant in many areas due to over harvesting as it has so far defied cultivation outside its natural habitat. It is an ideal pungent warm sedating herb. Osha has long been used to treat colds, coughs, and respiratory ailments. NOTE: Not to be confused with Ligusticum sinense or Ligusticum chaunxiong (L. wallichii), plants in the same genus with different attributes.

Below is an overview of Osha, combining and interpreting the best of Western Science, Traditional Chinese Medicine (TCM), Shamanism, Folklore and more. Gain a balanced and thorough understanding of the healing properties of Osha.

Osha is a perennial herb with the typical appearance of any other member of the parsley family. The root has a very strong pleasant “spicy celery” fragrance that resembles lovage. (Levisticium officinale). Found in the Rocky Mountains, Northern Mexico, and especially the Southwestern US. It is strictly a mountain plant, common to the upper limits of the subalpine zone. It depends on mycorrhizal fungi, making cultivation outside its habitat less then successful.

Caution: None noted. However, hemlock is often confused with osha. Hemlock is poisonous and the poison can be absorbed by the skin. So be careful when harvesting and be sure of your plant’s identification.

History/Folklore: Taos and Pueblo Indians plant Osha in irrigation ditches to inhibit cutworms and other larvae. Osha does not cure headaches in the way that Gao Ben (Ligusticum Sinense) does.

Osha has long been used by Native American and Hispanic cultures. It is used to treat colds, sore throats, bronchitis, influenza, pneumonia and other respiratory infections and ailments. It is known for its lung supporting and lung cleansing abilities.

Osha also helps numb the pain associated with sore throats, coughing, and congestion in the sinuses and chest. Some find it more effective in this respect than echinacea.

It is also used to treat ailments associated with the heart.

The leaves can be boiled and eaten like greens or added raw to salads. It is used to make tea, decoctions, ointments, lineaments, pastes, and extracts. It can also be chewed or burnt to clear sinuses.

Its common name, love root and bear medicine derives from Native peoples observing bears eating the root and then becoming amorous and more playful with each other.

The herb is being studied for its possible anticancer and antioxidant properties.

Harvest in the Afternoon

The plant is best harvested in the afternoon as it is relished by bears, which visit the plants in the morning. The Navajo credit the bear with teaching them about Osha.

The Zuni, Aztec, Tarahumara and Chiricahua used an infusion of the herb for body aches and were chewed by medicine men and patients during healing ceremonies to protect against dangerous spirits.

Many Native Americans tied the plant around their ankles as a shield against rattlesnakes and chewed the leaves to increase stamina.