Oranges bring good luck, are loaded with Vitamin C and the peels are super high in nutrients. There are many different varietals of oranges that are used to make orange peel, but all of them help build and move Qi (Energy) in the body. They are a powerful and tasty herb often used in combination with other herbs to improve the overall taste of herbal remedies and lend strength to the formula.

Watch a short video, from Ann Christensen, Founder and Creator of White Rabbit Institute of Healing™ – Not Just Your Morning Beverage…

Below is an overview of Orange/Orange Peel​, combining the best of Western Science, Oriental Medicine, Traditional Chinese Medicine (TCM), Shamanism, Folklore, and a wide range of healing modalities. Gain a balanced and thorough understanding of the healing properties of Orange/Orange Peel.

How to take FULL advantage of Orange/Orange Peel's healing powers! 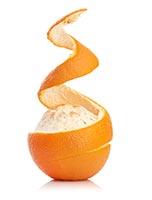 A member of the Sweet Orange rutaceae Family. Orange trees are evergreen with grayish-brown barks that can grow to be 15 ft to 25 ft tall. Old trees may grow to be 50 ft tall. The trees often form the shape of a hemisphere. They have glossy, dark green leaves that are oval and about 3-4 inches long. Orange flowers are small, white, and fragrant, growing in clusters of 2-6.

Believed to be native to China and then cultivated across the globe.

Parts Most Frequently Used: Peel (Picked at the ripe stage and then dried.), Fruit, Leaf, Flower, and Juice

Chen Pi (Citrus reticulata/orange peel) has been used in China since the second century B.C. The bulk of the nutrients are in the peel and not the orange fruit itself. Grated orange peel is added to candies, breads and bakery goods.

It is often added to herbal formulas in order to improve their taste and help build Q. Chen pi is considered an important herb for both the Spleen and Lung meridians.

Orange Flower Water is used on dry skin and broken capillaries to stimulate new cell growth and as a sedative due to its calming effects.

According to historical sources, Christopher Columbus carried orange seeds with him during his expedition to the Americas. In the 16th century Portuguese explorers introduced orange trees to the West, and in 1513, Ponce de Leon, the Spanish explorer introduced oranges to Florida, in the United States. The orange has come to be known as the oldest and most commonly grown fruit tree in the world.

Orange peels contain higher concentrations of nutrition and healing compounds than the fruit does, and the fruit are powerfully nutritious and healing.

The compound synephrine, found in bitter orange peel, is a banned substance by the NCAA (National Collegiate Athletic Association).

Bitter orange oil is used as a food flavoring agent in liqueurs (Cointreau, Triple Sec, and Grand Marnier) and marmalades. The fruit is so sour and bitter it is rarely eaten, except in Iran and Mexico where the dried peel is also used as a seasoning.

Good quality orange peel is in large pieces, thin skinned, pliable, red in color, oily, and aromatic. It will first taste a bit sweet and then bitter.

Oranges are a symbol of love, marriage, joy and happiness. Tangerines and oranges are an auspicious symbol during the Chinese New Year celebrations as the sound of the word for “luck” and “wealth” are very similar to the word for “orange.” The bright orange color also suggests the color of gold, so it is also a symbol for good luck and prosperity. A bowl of oranges is believed to bring good fortune. Orange trees will often be placed at the doorways of offices and businesses in order to attract good fortune.

In Greek mythology, the Golden Apple (believed to have been an orange), was the indirect cause of the Trojan War. Eris, the goddess of discord had not been invited to the wedding of Peleus and the sea nymph. In anger she threw the golden apple, with the inscription that only the most beautiful could claim it, into the ceremony. The goddesses Hera, Athena, and Aphrodite all claimed it, bringing it to Zeus to decide which of them was the fairest. To avoid trouble, Zeus assigned the task to Paris of Troy. Each goddess appeared naked before him and bribed him to choose one of them. Paris chose Aphrodite as she promised him the love of the world’s most beautiful women, and thereby starting the Trojan War as Helen, the most beautiful was already married to King Menelaus.

Oranges are believed to be native to the Far East and are the fruit that has been called the Golden Apples of Mythological fame.

Many cosmetics use the peel in cut form or in powder form. It was used as a snuff to prevent allergies.

Oranges can produce flowers and fruit at the same time so they have become a symbol of fertility.

How to use Orange/Orange Peel to take FULL advantage of it's healing powers!