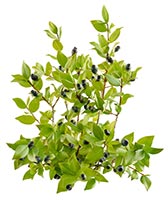 Myrtle is one of the oldest and historically important medicinal herbs. The leaves and berries are commonly used in Middle Eastern culinary dishes to season lamb. Other regions use myrtle to season pork dishes. The herb has curative and restorative properties. It has anticancer and anti-inflammatory properties and has long been used to aid digestion, cure lung ailments, fight acne, and help treat bladder and kidney infections.

Want to Find Out More about Myrtle?

Take full advantage of the healing power of Myrtle (Tao Jin Niang). What does Myrtle treat? Find out what you DON’T know about how and why Myrtle works. Find Out More…

Myrtle is in the family Myrtaceae. Myrtle is a hardy, evergreen shrub with dark green oval leaves and white star-shaped flowers that are followed by small black berries from June through July. The shrub can grow as tall as 16 feet, and this particular species has the largest leaves and flowers.

Myrtle is generally thought to be native to the Mediterranean region, including North Africa and the Middle East. It is now cultivated in many other parts of the world. Myrtle prefers cool climates. The variety found in China, Rhodomyrtus tomentosa, (aka Downy Myrtle) grows wild on mountains and along roadsides. Its leaves are covered in soft hairs.

Caution: The leaves and berries are generally considered safe when used as recommended in medicines and as a culinary spice. The dried berries and leaves can cause nausea, diarrhea, and low blood pressure in some people. The essential oil of Myrtus communis is slightly toxic if used internally.

History/Folklore: Myrtle berries, leaves, and essential oil are all used medicinally. The plant has been used for centuries by many cultures to treat a range of disorders from asthma, to acne, to urinary and kidney disorders, to respiratory ailments, including dry or phlegmy coughs.

A group of flavonols found in myrtle that are known as myricetin are being studied for their anticancer, antioxidant, and anti-inflammatory properties. They are thought to also be an aid to Alzheimer patients because they inhibit beta-amyloid fibril formation, the protein chains that are linked to Alzheimer’s.

Similar to willow bark, myrtle contains high levels of salicylic acid, which can be converted into the compound salicin that is a precursor to aspirin and which is used to lower fever and reduce pain. In Europe and China the herb is used to treat sinus infections.

Extensive research has been conducted regarding the effects of myrtle essential oil on the endocrine system, primarily regarding the regulation of the thyroid gland. Whether consumed or inhaled, the essential oil positively affects the release of hormones that are related to the ovaries and women’s reproductive health.

Myrtle contains very high levels of antioxidants (including quercetin, tannins, myricetin, and catechin). These have all been studied and shown to have significant anti-carcinogenic and anti-mutagenic properties, making myrtle a candidate for anticancer and cancer recovery treatments. Myrtle is similar in composition to sandalwood, which has been connected to lower rates of prostate and breast cancers.

In Turkey, an herbal tea made from dried myrtle leaves and berries is used to help lower blood sugar levels in diabetics. This tea is also used throughout the Mediterranean region for treating urinary and bladder infections.

The ancient Romans also used the herb to treat urinary and respiratory ailments. The ancient Egyptians used it to treat nervous disorders. Hippocrates, Pliny, Dioscorides, Galen, and other known healers of ancient Rome, Greece, Arabia, and Egypt have all referenced the healing benefits of myrtle. The herb is mentioned a number of times in the bible and in the mythologies of ancient Greece and Rome.

In Judaism (Hebrew) myrtle is known as Hadassah, the birth name of Esther the Jewish queen married to a Persian king who saved the Jews from certain annihilation in Persia. In Jewish liturgy, myrtle is one of the four sacred plants and represents those who have accomplished good deeds but have not studied and therefore do not have, knowledge of the Torah. In Jewish mysticism, the myrtle is a phallic symbol and the masculine force at work within the universe.

In China, Rhodomyrtus tomentosa, is used instead of the Western varietal. Both plants are in the family Myrtaceae. It is a popular ornamental plant in tropical and subtropical regions, where it is grown for its abundant flowers and sweet edible fruit. It is used as a fire retardant species planted in the Himalayas to help create fire breaks. Medicinally the herb is used to Build Blood, relieve diarrhea, and treat rheumatoid arthritis.

In modern Wicca or Neo-Pagan rituals, it is associated with Beltane (May Day).

The dried leaves are often used instead of bay leaves in culinary dishes. The berries can be used as a pepper substitute and contribute to the distinctive flavor of the Italian mortadella sausage.

Myrtle is widely cultivated as an ornamental plant in gardens and parks, often being used as a hedge plant or in topiary gardens, as it is easily trimmed into pleasing shapes.

The roots and bark of myrtle trees are used for tanning leather.

Queen Victoria began a royal tradition of including myrtle in a bride’s bouquet. This tradition has continued to the present day for brides of the royal family. When Kate Middleton married Prince William, she included myrtle in her bouquet. Likewise, the bouquet carried by Meghan Markle when she married Prince Harry contained myrtle, grown from a plant that provided the myrtle for Queen Elizabeth’s wedding bouquet.

In Italy on the island of Sardinia, myrtle grows wild and is a staple spice used for smoking meats and adding flavor to grilled dishes. At the end of a meal, locals enjoy a glass of Mirto bianco, a liqueur made from both myrtle berries and leaves.