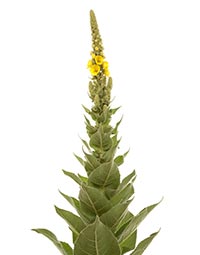 A wonderful hearty herb. Considered an all around remedy for the lungs. Also excellent for treating boils and urinary dysfunction, hemorrhoids and soothing pain. It’s soft velvety leaves are why it is often called the Velvet Plant.

Below is an overview of Mullein, combining and interpreting the best of Western science, Traditional Chinese Medicine (TCM), shamanism, folklore and more. Gain a balanced and thorough understanding of the healing properties of Mullein.

Want to Find Out More about Mullein?

Take full advantage of the healing power of Mullein (Jia Yan Ye). What does Mullein treat? Find out what you DON’T know about how and why Mullein works. Find Out More…

There are around 300 species of mullein. They are typically biennial or perennial plants, rarely annuals. A dense rosette of leaves at the ground sends up a tall flowering stem. Small, yellow five-stamen flowers are densely grouped on the tall stem, which bolts. Leaves are large, up to 50 cm long. All parts are covered in star-shaped trichomes, particularly the leaves, giving them a silver appearance.

Mullein is native to Europe, Africa, and Asia, with the highest species diversity in the Mediterranean. It has now also been introduced to America and Australia. Mullein likes chalky soil and a sunny location and will flourish almost anywhere.

History/Folklore: Mullein was used as a healing tobacco by American Indians to treat pulmonary ailments, including asthma. Native Americans also used to grind the seeds as a paralytic solution for catching fish due to the plant’s high levels of rotenone, which paralyzed fish, making it easy to catch them.

During the American Civil War, the Confederate army used mullein to treat respiratory problems. By 1913, mullein had become extremely popular in America as a treatment for coughs and conditions such as inflamed mucous membrane lining the throat. The steam was often inhaled to relieve cold symptoms such as nasal congestion and throat irritations.

Inhaling the steam vapor of the plant is used to ease congestion.

Mullein flowers steeped in olive oil for about three weeks produce an ointment that is useful for treating frostbite, chapped skin, hemorrhoids, and earache. It is even used to remove rough warts if applied as a poultice.

Tea made from the roots of mullein can be used to treat incontinence from bladder weakness; likewise, it eases the birthing process and helps cauterize wounds.

Tea made from the leaves of mullein is useful for treating respiratory infections. These include mild or chronic sore throats, coughing and raspiness, asthma, and congestion. A tincture made from the flowers can be used to treat the same conditions but is considered significantly stronger than the tea. Mullein is not noted for its pleasant taste, so it is often prepared with boiled milk to make drinking it as a medicine easier.

Mullein was used in the Middle Ages to treat skin and lung disease. When dried, the plant’s stalks and dried flower buds readily ignite and are used for lamp wicks and small torches.

The Greeks made lamp wicks from the dried leaves of mullein, and the ancient Romans dipped its dried stalks into tallow for funeral torches. The Roman herbalist Pliny noted that figs do not putrify at all if wrapped in mullein leaves. Roman ladies reportedly used an infusion of the herb’s flowers to add a golden tinge to their tresses.

Mullein is the herb identified with St. Fiacre, the Irish patron saint of horticulturists.

Linked to witches, mullein was used to ward off evil spirits.

Mullein’s extremely versatile leaves have been used not only as toilet paper but also as containers for vegetables when cooking in a fire pit. They have been used as gloves for picking nettles (whose prickles make harvesting the plant painful and difficult).

In pioneering days, American girls from Midwest would rub their cheeks with mullein leaves to bring a rosy flush to their skin.

Typically all fluids that include mullein are filtered to remove the tiny hairs from the plant before drinking.

Mullein is considered a first-rate drill for use in the hand-drill method of friction fire-starting.

The psychic healer Edgar Cayce is said to have recommended a recipe for fresh mullein leaves for treating varicose veins and kidney problems.

Mullein is used to make yellow and green dyes.

Mullein’s tiered leaves and hairs have been used as candlewicks and torches.

Mullein can be used by gardeners as a good indicator of the level of toxicity of a planted area. If the plants’ stalks grow tall and straight, the soil is good; if they grow crooked or weak, the soil is chemically contaminated.

Mullein is smoked by the Menominees tribe to treat respiratory complaints.

Mullein was used during civil war by the Confederate army to treat respiratory complaints.

Mullein was used in the Middle Ages to treat skin and lung disease. It was also used to ignite lamp wicks and small torches as the dried stocks ignite easily.