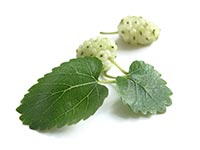 White Mulberry has been a source of food for silkworms, a medicine, and a sweetener. Associated with the Tao and other sacred traditions, this tree is often planted in sacred gardens or as a symbol of cosmic order and replenishment. The berries are a wonderful herb for nourishing blood.

Below is an overview of mulberry, combining and interpreting the best of Western Science, Traditional Chinese Medicine (TCM), Shamanism, Folklore and more. Gain a balanced and thorough understanding of the healing properties of mulberry.

The Mulberry family, Moraceae is a division of the Urticaceae family (Nettle family). There are upwards of 50 genera and about 900 species.  The young wood is downy, soft and pithy.  Leaves vary in size and form, often shaped like fig-leaves. Mulberry trees do not bear fruit early in life.  While some fruit may occur before 15 years of age, the best fruit is said to come from the oldest trees. White Mulberry is native to China and it is now cultivated throughout Europe and the Americas. They like a warm, well-drained, loamy soil.

History/Folklore: Chinese White Mulberry is used in the silk industry as a food source for silkworms, and was brought to the US in colonial times for the purpose of establishing a silk industry in the Americas. Both black and white mulberry contain a milky juice which coagulates into a rubbery substance thought to give strength to the filaments spun by the silkworm. It is thought to have been brought to England by the Romans, where it was likely introduced from Persia.  Early Greek and Roman writings refer to the plant.  The Romans ate mulberries at feasts.  The legend of Pyramus and Thisbe tells of their being slayed beneath a Mulberry tree with the fruit changing from white to red as it absorbed their blood.

The Mulberry was included among the large list of useful and medicinal plants order by Charlemagne (812 AD) to be cultivated on the imperial farm. King James I in 1608, issued an edict encouraging the cultivation of Mulberries in order to promote Englands silk industry. However, the Black Mulberry was planted, not the White whose leaves the silkworms flourish on as a main source of food. The oldest Mulberry tree in England is said to be of Syon House, Brentford. The tree was introduced from Persia in 1548 and is reputed to have been planted by the botanist Turner.

In China each of the plants parts have unique and diverse therapeutic uses (see above). The berries are bottled as a beverage to enhance immunity and promote good health. The bark is honey-fried to enhance the stop coughing and wheezing functions of good quality bark is thick, powdery and white.  The leaves are also used as an external wash for eye problems. Good quality leaves are large with thick leaves that are complete, crisp and yellow-green in color.

In some Chinese traditions the World Tree is identified as K’ong Sang, the hollow mulberry tree.  It is considered a hermaphrodite because the tree dates back prior to the separation of Yin and Yang (male and female) and represents the Tao, or all encompassing cosmic order. This connection to the Tao and cosmic order set the standard for a sacred mulberry grove, Sang Lin, to be planted outside the eastern gates of the early royal capitals of China.  The mulberry is also a common tree in Isalmic sanctuaries or on Arab pilgrimage routes.

Significant amounts of Vitamin A, B1, B2 and C. Protein, Lipids, Anathocyanins, Iron

In Japan, paper is manufactured from the fibrous bark.

In Cabul the berry is pounded into a powder and used with flour for bread.

Mulberry syrup is often used to sweeten and improve the flavor of other more bitter herbal decoctions and teas.