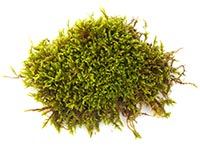 Being highly absorbent and soft, with some antibacterial properties, mosses have long been used to help treat wounds. These same qualities have also led to their being used as insulation in clothing and shoes. In Finland, peat moss has been used to make bread during times of famine.

Below is an overview of Moss (Tai), combining and interpreting the best of Western Science, Traditional Chinese Medicine (TCM), Shamanism, Folklore and more. Gain a balanced and thorough understanding of the healing properties of Moss (Tai).

Mosses are non-vascular plants in the divison bryophyta. They are small, herbaceous plants that absorb water and nutrients mainly through their leaves. They do not have proper roots but have threadlike rhizoids. They are distinguished from liverworts by their multi-cellular rhizoids.

Typically they grow in damp, moist, cool woodland and forest environments. They need some sunlight, and some have adapted to desert environments.

Parts Most Frequently Used: Bed of Moss, Clump of Moss

History/Folklore: Mosses have been used by the Norwegian Laplanders and other North American Native Americans as bedding, dressing for wounds, diapers, pads for menstrual fluid, and in basketry. Alpine peoples have used moss for insulation in boots, mittens, and cracks in wooden buildings. Tribes of the Pacific Northwest and Canada have used mosses to clean salmon prior to drying. Baskets for storing food were lined with mosses, and baskets used for steaming foods were also lined in moss.

Decaying moss is a major component of peat, which is mined for fuel and as a horticultural additive for soils.

Moss is better at retaining and distributing moisture than cotton, making it ideal for treating wounds. It is also soft and cool, making it more comfortable and less irritating than cotton.

In Finland, peat moss has been made into bread during times of famine and, in Mexico, moss is used as a Christmas decoration.

Some places consider moss a troublesome weed, as it can inhibit the emergence of seedlings and the penetration of water and fertilizer to the roots of plants. In the damp climate of the Pacific Northwest, it is cultivated in place of grass as a more eco-friendly garden cover. There, grass is considered the weed!

In China, Lycopodium, or club moss is used. Technically, club moss is not a true member of the moss family. It does contain huperzine A, which studies have found may help increase the level of a brain chemical that appears to be low in the patients with memory disorders.

Peat is made from moss and is used to smoke the malt used in Scotch whisky.

Mosses (Sphagnum, in particular) was used in WWI as first-aid dressings on soldiers’ wounds, as moss absorbs three times faster than cotton.

In the rural UK, the moss Fontinalis antipyretica was traditionally used to put out fires, as it held and retained so much water. Its Latin name means, “against fire.”