A highly toxic and poisonous plant, moonseed is rarely used anymore. It is best known for its antisyphilitic and antiscrofulitic properties. It works primarily on the gastric and salivary glands working to relieve adhesive inflammation by disintegrating unwanted tissue buildup. Its roots are believed to be better than Sarsaparilla as a blood purifier used for treating scrofula, gout, rheumatism, and cutaneous skin diseases in general.

Below is an overview of moonseed, combining and interpreting the best of Western Science, Oriental Medicine, Traditional Chinese Medicine (TCM), Shamanism, Folklore, and a wide range of healing modalities. Gain a balanced and thorough understanding of the healing properties of moonseed.

How to use Moonseed and take FULL advantage of it's healing powers! 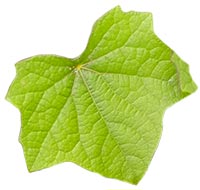 Moonseed is a small genus of deciduous climbing woody vines in the moonseed family Menispermaceae. They have small dioecious yellow flowers that bloom in July followed by one-seeded fruit that grow in small clusters of grape-like drupes and resemble grapes. It’s stem is round and climbing about 1 foot in length. Its leaves are rounded and paler green underneath.

Caution: All parts of the plant are known to be poisonous.

History/Folklore: A highly toxic and poisonous plant, the Eastern variety, M. dauicum, has been used to treat skin disorders, rheumatism, and cervical cancer. M. canadense, has been used externally as a tonic, laxative, dermatological aid, and treatment for venereal disease.

The name moonseed comes from the shape of the seed, which resembles the shape of a crescent moon. The word Menispermum derives from th Greek words mene, meaning “crescent” moon and sperma, meaning seed.

The eastern varietal, M. dauricum is named after the Daur, a Mongolian people of Northeast Asia.

Its active principle is menispine, an alkaloid. Moonseed is sometimes used as a substitute for sarsaparilla. A tea made from the roots has been used to treat indigestion, bowel disorders, arthritis, and as a blood cleanser. It is considered a good laxative and useful for treating chronically inflamed arthritis, especially when digestion is weak and lymph nodes are swollen.

The Native American Cherokee people used a tea made from the roots as a laxative. The roots were also used as a blood cleanser and “female tonic”. Moonseed was also used as an ingredient in curare, a muscle relaxant used on the tips of poison arrows.

Moonseed is used in homeopathic medicine to treat back aches, headaches, itching all over, and swollen tongue with much saliva. It is used to treat pain in the spine and dry mouth and throat. Moonseed is also used homeopathically to treat an insecure, scared, and uncertain mental state that startles easily, even from sleep.

Externally, the roots are used as an ointment on chronic sores and to treat chronically inflamed skin diseases.

In Oriental medicine, the rhizomes are used to treat a wide variety of Heat-toxin related problems, especially when swelling is present. It has been used to treat upper tract cancers, irregular heartbeat, and during surgical anesthesia to prevent swelling. It can be found in formulas for treating swollen, sore throats, mumps, jaundice, dysentery, and coughs due to Lung Heat. As it has cumulative toxicity it is never used continuously for long periods of time and it is often used in tandem with herbs that can help counter the herbs unwanted toxicity. Typical dosing is 3-12g for decoctions or 1-3ml for tinctures.

The compound acutumine, found in moonseed, is being studied for its anticancer properties. The compound has been shown to kill T-cells, and important quality for leukemia and lymphoma treatments.

All parts of the plant are known to be poisonous, containing dauricine and related isoquinoline alkaloids. Children have died from eating the fruits. Dauricine inhibits cardiac K+ channels causing arrhythmia. Other symptoms associated with overeating the fruits include seizures and neuromuscular arrest. First aid includes the induction of vomiting, followed by the medicinal application of charcoal and sodium sulphate. In the case of spasms, intravenous administration of diazepam is included. Respiratory arrest, paralysis and kidney function can all be implicated in the eating of this fruit.

Do not confuse moonseed (Menispermum canadense or M. dauricum), for Tinospora cordifolia, also sometimes commonly called moonseed. Tinospora cordifolia is native to India and its roots, stems, and leaves are used in Ayurvedic medicine to treat a variety of ailments including diabetes, arthritis, hepatitis, and upset stomachs. It is an entirely different plant.

Moonseed poison is referenced in Harry Potter Trading Card Game. It is silver in color and highly poisonous.

The plant’s common name, moonseed, derives from the halfmoon shape of its seeds.

While moonseed fruit resembles a common grape cluster, moonseed fruit is toxic and can be lethal if too much is eaten and not treated immediately. Do not confuse these grape look-alikes, for wild, wine or edible grapes!

How to use Moonseed to take FULL advantage of it's healing powers!